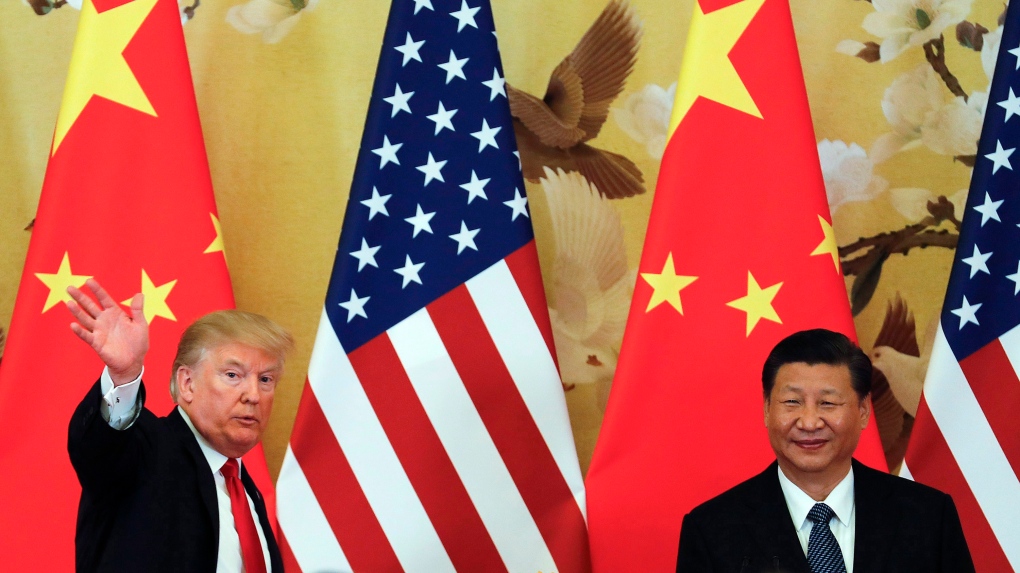 In this Nov. 9, 2017, file photo, U.S. President Donald Trump waves next to Chinese President Xi Jinping after attending a joint news conference at the Great Hall of the People, in Beijing. (AP Photo/Andy Wong)

The tariffs, which Trump wants set at a 10 per cent rate, would be the latest round of punitive measures in an escalating dispute over the large trade imbalance between the two countries. Trump recently ordered tariffs on $50 billion in Chinese goods in retaliation for intellectual property theft. The tariffs were quickly matched by China on U.S. exports, a move that drew the president's ire.

"China apparently has no intention of changing its unfair practices related to the acquisition of American intellectual property and technology," Trump said in a statement Monday announcing the new action. "Rather than altering those practices, it is now threatening United States companies, workers, and farmers who have done nothing wrong."

Trump added: "These tariffs will go into effect if China refuses to change its practices, and also if it insists on going forward with the new tariffs that it has recently announced."

Trump said that if China responds to this fresh round of tariffs, then he will move to counter "by pursuing additional tariffs on another $200 billion of goods."

It wasn't immediately clear when the new tariffs could be put in place, as the trade office has yet to identify the Chinese goods to be penalized or conduct a legal review. The first round of penalties announced by both nations is set to take effect July 6.

The intellectual property sanctions were the latest in a spate of protectionist measures unveiled by Trump in recent months that included tariffs on steel and aluminum imports to the U.S. and a tough rhetoric on trade negotiations from North America to Asia.

The escalation in the dispute with China may also serve as a warning to other trading partners with whom Trump has been feuding, including Canada and the European Union.

The move quickly drew praise from former Trump senior adviser Steve Bannon, who told The Associated Press: "President Trump told China and the world tonight that America will not back down when it comes to economic aggression."

But Wall Street has viewed the escalating trade tensions with wariness, fearful they could strangle the economic growth achieved during Trump's watch. Gary Cohn, Trump's former top economic adviser, said last week that a "tariff battle" could result in price inflation and consumer debt -- "historic ingredients for an economic slowdown."

Trump's comments came hours after the top U.S. diplomat accused China of engaging in "predatory economics 101" and an "unprecedented level of larceny" of intellectual property.

Secretary of State Mike Pompeo made the remarks at the Detroit Economic Club as global markets reacted to trade tensions between the U.S. and China.

He said China's recent claims of "openness and globalization" are "a joke." He added that China is a "predatory economic government" that is "long overdue in being tackled," matters that include IP theft and Chinese steel and aluminum flooding the U.S. market.

"Everyone knows ... China is the main perpetrator," he said. "It's an unprecedented level of larceny."

"Just ask yourself: Would China have allowed America to do to it what China has done to America?" he said later. "This is predatory economics 101."

The Chinese Embassy in Washington did not respond to a request for comment.

Pompeo raised the trade issue directly with China last week, when he met in Beijing with President Xi Jinping and others.

"I reminded him that's not fair competition," Pompeo said.

President Donald Trump had announced a 25 per cent tariff on up to $50 billion in Chinese imports. China is retaliating by raising import duties on $34 billion worth of American goods, including soybeans, electric cars and whiskey. Trump also has slapped tariffs on steel and aluminum imports from Canada, Mexico and European allies.

"We use American power, economic might and influence as a tool of economic policy," he said. "We do our best to call out unfair economic behaviours as well."

In a statement, Trump says he has an "excellent relationship" with Xi, "but the United States will no longer be taken advantage of on trade by China and other countries in the world."