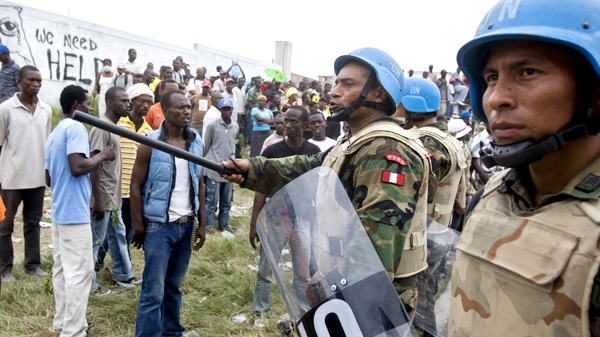 In this photo released by MINUSTAH, Peruvian UN peacekeepers secure the entrance of an industrial area during aid distribution in Port-au-Prince, Haiti, on Tuesday, Jan. 19, 2010. (AP / MINUSTAH, Marco Dormino)

The UN secretary-general is recommending that the UN peacekeeping mission in Haiti stay for another year - which might be its final one.

The head of the mission, Sandra Honore, told the UN Security Council on Thursday that Ban Ki-moon wants the peacekeeping mission to extend for a year to help Haiti complete its upcoming round of elections.

She says the mission also will help the country with an "orderly and sustainable" transfer to having national authorities assume responsibility for future elections.

Honore told reporters that she is urging all parties in Haiti to avoid the kind of violent disruptions that marred legislative elections in August.

The Security Council will consider the mission's mandate later this month. The mission had more than 4,500 uniformed personnel as of late June.