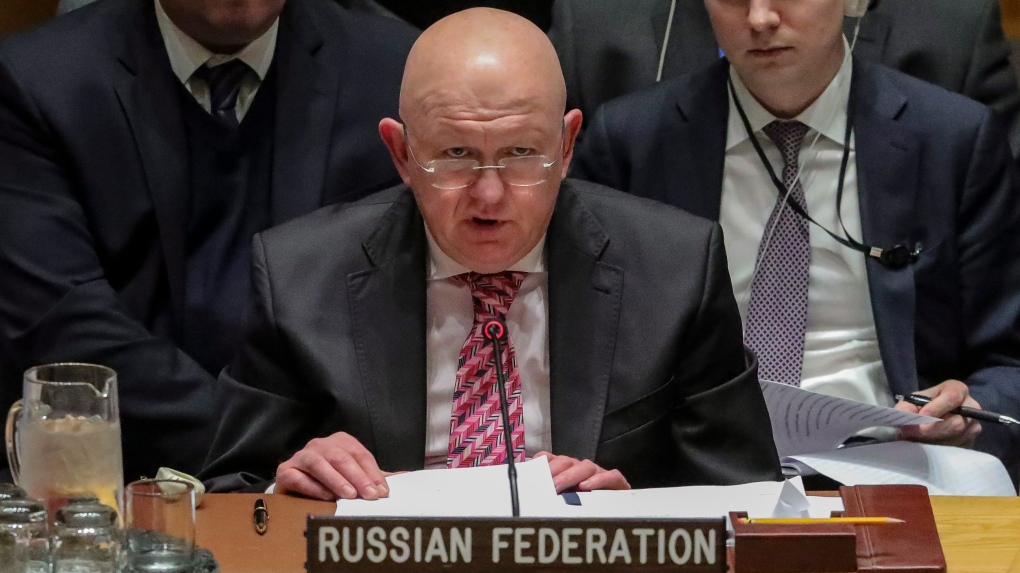 Among the disputes had been whether to refer to UN experts' findings that Yemen's Houthi Shiite rebels are receiving parts for drones and weapons, some with technical characteristics similar to arms manufactured in Iran.

Britain, which drafted the resolution, and the U.S. and other Western nations supported the inclusion of the experts' findings, but Russia and China objected. The much-revised British draft that was put to a vote and approved 13-0 eliminated all references to the Houthis and Iran, but Russia and China said their demands still were not fully met and abstained.

That appeared to surprise Britain and its Western allies who thought after last-minute negotiations into the early afternoon that all 15 council members would vote "yes."

British Ambassador Karen Pierce expressed disappointment, saying, "If countries are going to engage in negotiations with us in detail and then not support the text, then that in my mind is sharp practice."

In a broader comment clearly aimed at Russia, she warned against the threat of a veto becoming "simply a negotiating tactic," stressing the need for compromise to ensure the Security Council meets its responsibilities to ensure international peace and security.

France's ambassador, Nicolas de Riviere, said a compromise solution was found to maintain the unity of the council, and "it is therefore all the more regrettable that this unity dropped away at the time of the vote."

He said resolutions are "the fruit of compromise" and no member should expect to get all their demands.

Russian Ambassador Vassily Nebenzia countered that "our objections to a host of provisions of the British past draft" were raised during negotiations and a number were taken into account only on Tuesday.

He said provisions in the text still "go beyond the objectives of this resolution," and Russia was presented with "a take-it-or-leave-it approach which does not allow for compromise."

"We cannot agree to that kind of approach," Nebenzia said.

He said the council needs to avoid divisions when the situation in Yemen requires collective effort to help achieve a cease-fire and start political negotiations and restore peace. "This could have been agreed to calmly without drama," Nebenzia said.

Yemen, the Arab world's most impoverished country with a population of 26 million, plunged into war in 2014 after the Iranian-backed Houthis took over the capital of Sanaa. The internationally recognized government fled and sought support from neighbouring Gulf countries.

In March 2015, a Saudi-led, U.S.-backed military coalition began what has turned into a devastating war that has killed more than 10,000 people, displaced 2 million and created the world's worst humanitarian disaster.

The resolution expresses concern at "violence and enforced disappearances, and threats arising from the illicit transfer, destabilizing accumulation and misuse of weapons." It reiterates the need for dialogue and reaffirms "the need for the full and timely implementation of the political transition" following a national dialogue.

The panel of experts said in a recent report that the main smuggling route for both commercially available drone parts and weapons "seems to run overland from Oman and the southern coast of Yemen, through territory controlled by the government of Yemen, towards Sanaa," which is controlled by the Houthis.

No mention is made of that in the resolution, which also doesn't refer to the experts' finding that some parts for the drones and weapons are similar to those manufactured in Iran.

The resolution does ask the UN panel to report on "commercially available components which have been used by individuals and entities" on the UN sanction blacklist "to assemble unmanned aerial vehicles, water-borne improvised explosive devices, and other weapons systems."

Rodney Hunter, political co-ordinator for the U.S. Mission, expressed hope that "this information will help member states and private companies exercise greater vigilance over the transfer of these items to Yemen."

The experts said the parts and weapons potentially violate a U.N. arms embargo. The resolution calls on all countries "and other actors to comply with the targeted arms embargo."

In one reference to the Houthis, the council expresses "serious concern at the devastating humanitarian situation in Yemen and all instances of undue hindrances to the effective delivery of humanitarian assistance, including the recent interference in aid operations in Houthi-controlled areas as well as obstacles and the undue limitations on the delivery of vital goods to the civilian population occurring throughout Yemen."

The only other reference in the resolution calls for access "without delay" for the UN to inspect and maintain the oil tanker Safer, which is moored off Yemen's main port of Hodeida in the Houthi-controlled north and poses "environmental risks."

Hunter said this first mention of the Safer by the council in a resolution "reflects the international community's deep concern about the chance that this tanker could rupture, causing an environmental disaster in the Red Sea." He accused the Houthis for not providing the UN with access to the vessel.