UN says abandoned tanker near Yemen at risk of exploding 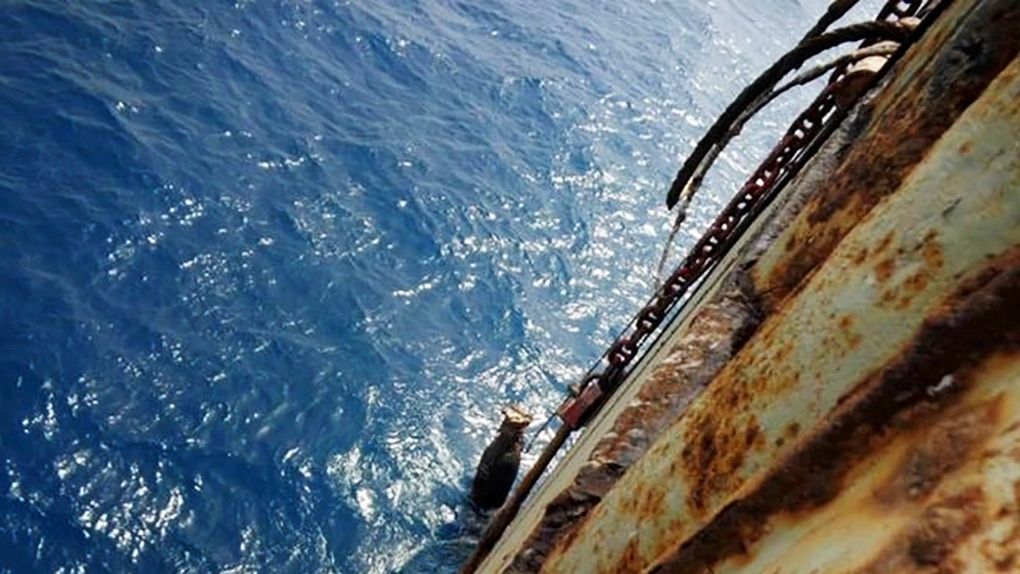 CAIRO -- The United Nations said an abandoned oil tanker moored off the coast of Yemen loaded with more than 1 million barrels of crude oil is at risk of rupture or exploding, causing massive environmental damage to Red Sea marine life, desalination factories and international shipping routes.

Meanwhile, Houthi rebels who control the area where the ship is moored have denied UN inspectors access to the vessel. Internal documents obtained by The Associated Press shows that seawater has entered the engine compartment of the tanker, which hasn't been maintained for over five years, causing damage to the pipelines and increasing the risk of sinking. Rust has covered parts of the tanker and the inert gas that prevents the tanks from gathering inflammable gases, has leaked out. Experts say maintenance is no longer possible because the damage to the ship is irreversible.

For years, the UN has been trying to send inspectors to assess the damage aboard the vessel known as the FSO Safer and look for ways to secure the tanker by unloading the oil and pulling the ship to safety.

But one European diplomat, a Yemeni government official and the tanker's company owner said that Houthi rebels have resisted. The diplomat said the rebels are treating the vessel as a "deterrent like having a nuclear weapon." All three individuals spoke on condition of anonymity because of the sensitivity of the subject.

"They do say that openly to the UN, 'We like to have this as something to hold against the international community if attacked,"' the diplomat said. "Houthis are definitely responsible for failure of the UN to look at the ship."

Money is also an issue, the diplomat said, adding that the Houthis initially were demanding millions of dollars in return for the oil stored in the tanker. The UN is trying to reach an arrangement where money could be used to pay workers and employees at Yemen's Red Sea ports, the diplomat added.

Some experts, however, criticize both the Houthis and the UN for failing to fully understand the magnitude of the crisis with the abandoned ship.

Ian Ralby, founder of I.R. Consilium, who specializes in maritime and resource security, told the AP that UN's efforts to send a team to assess the ship is "futile." What the vessel needs is a salvage team, he said.

"It's real shame that they wasted so much money and time in this futile operation," said Ralby. "If you are taking these years to get a simple team to assess, we will not have a second chance to salvage," he added.

Ralby, who has written extensively about the tanker, told the AP that amid declining oil prices the cost spent on cleaning up the environmental damage from an explosion or leakage will be much more than the millions worth of oil on the ship.

But the Houthis have refused to back down from their demands.

Mohammed Ali al-Houthi, the rebel group's leader, blamed the U.S. and Saudis for not letting the rebels sell the oil, saying in a June 18 Twitter post that any "disastrous consequences ... God forbid," that could result from the collapse of the vessel will be the responsibility of these two countries.

The Iranian-backed Houthi rebels are in control of the western Red Sea ports, including Ras Issa, 6 kilometres (3.7 miles) from where the FSO Safer tanker has been moored since the 1980s. They are at war with the internationally recognized government, which is backed by a Saudi-led coalition and the United States. President Abed Rabbu Mansour Hadi is in exile in Saudi Arabia and his government in disarray.

The floating tanker is a Japanese-made vessel built in the 1970s and sold to the Yemeni government in 1980s to store for export up to 3 million barrels pumped from oil fields in Marib, a province in eastern Yemen. The ship is 36 metres (118 feet) long with 34 storage tanks.

A senior official at the state-owned oil company in charge of the tanker, said because of a shrinking operational budget, which used to be around 20 million dollars a year before the war, the company could no longer afford to purchase fuel needed to run the boilers on the ship. The boilers are needed to power generators that, among other things, keep an inert gas that prevents explosions flowing. The tanker needs 11,000 tons of the fuel, which cost about 8 million dollars each year.

"After the stoppage of the boilers the strong majority of the equipment and the machines of the tanker stopped because they all depend on steam power," the company official said. That includes the machines that power the ventilation system, which reduces humidity and prevents corrosion, he said.

Since 2015, annual maintenance on the ship has come to a complete halt and most crew members, except for 10 people, were pulled off the vessel after the Saudi-led coalition imposed a land, sea, and air embargo before waging an extensive air campaign to dislodge the Houthi rebels from areas they seized including the capital Sanaa.

The civil war in Yemen has caused massive destruction in most of the areas under Houthis control. Because of the proximity of the tanker to the contested Hodeida port, fears have grown that a stray shell or bullet could hit the tanker causing massive explosion or oil leak into the Red Sea.

Hodeida was at the centre of Yemen's civil war in 2018 when coalition forces made major advances to take over the vital port, which is considered the life-line of most of northern Yemen, where most of Yemenis live and where the Houthis enjoy full control. A UN-brokered peace deal put an end to the offensive but failed to achieve peace or loosen Houthis' grip over the ports.

Over the past two years, the Yemeni government in exile, the UN, and western diplomats have been sounding the alarm and putting pressure on Houthis to secure the tanker. The rebels initially agreed to let inspectors examine the tanker but later backtracked.

"The life of the shrimps is more precious than the life of Yemeni citizen to the U.S. and its allies. Is this because they care about their naval ships or the Israeli presence in the Red Sea?" wrote Mohammed Ali al-Houthi in a May 25 Twitter post. "Why is Safer more dangerous than the siege and the assault of the American, British, Saudi, Emirati and their allies on the people?" he added in reference to the US-backed, Saudi-led coalition targeting the rebels in Yemen.

Yahia Sharaf Eddin, the deputy head of Yemen Red Sea Ports Corporation, defended the Houthis rebels and told the AP that the group had instructed port authorities to assist UN inspectors. He said it was the Saudi-led coalition that refused to give the UN a green light to board the decaying tanker.

The more delays in reaching a solution to the vessel, the more dangers it poses, Sharaf Eddin said.

A recent internal government memo obtained by the AP shows that earlier this month a diving team was dispatched by the state-run oil company that owns the tanker to seal holes in the ship that have allowed seawater to leak into the engine room.

The divers were able to make repairs, but it remain unclear if the work will hold, according to the July 13 report.

"We believe that the plugs/seals that were installed to prevent the entry of seawater into the engine room space will not withstand/hold long," the report read.

An earlier letter dated Oct. 2019 sent by the Yemeni minister of oil -- who is affiliated with the Saudi-backed government -- to the prime minister, and seen by the AP, found other problems with the tanker.

"Rust has covered some parts of the tanker along with equipment, fire distinguishing system stopped working, and what is more dangerous is that the gas which was covering the oil inside the tanks has leaked out. It was used to protect the tankers from exploding," the letter read.

The oil minister's letter recommended three different approaches to deal with the tanker: make repairs, pump the oil to another ship, or to pull the tanker away and safely unload it in another port.

The minister wrote that because of the "collapsing condition" of the vessel, the best solution is to pull it away to another port.

"We are notifying you about this dangerous situation to do your best and to get Yemen and the region out from such environmental dangers," he wrote.

The letter came months after the UN's projects arm, known as UNOPS, put out a tender to hire an international agency to inspect the vessel after an initial agreement with Houthis.

The UN hired a team of experts and had them standing by in Djibouti. The AP obtained a copy of the tender letter and documents showing the experts' proposed inspection program and a list of equipment needed, including gas detector and oil sampling kits.

But the Houthis backed out of the agreement before the repair crew could be sent to Yemen.

Mark Lowcock, the UN humanitarian chief, told the UN Security Council last year that the UN assessment team was ready to be deployed but "the necessary permits remain pending with the Ansar Allah authorities" in reference to Houthis.

"I would just like to note that this is additionally frustrating when one recalls that the same authorities wrote to the United Nations early last year requesting assistance with the tanker and promising to facilitate our work," he added.

Sharaf Eddin, the Yemeni ports official, accused the UN of siding with the Saudi-coalition and misleading the public by blaming Houthis for the delays.

"This is the same UN which is exploiting Yemen tragedy to collect donations then spend it on its own employees," he said, echoing Houthis' widely held anti-UN sentiment. He added that the coalition in 2017 refused to give access to a fuel vessel to head to the Safer tanker to run the power generators. "What is Houthis' interest in preventing a disaster? Any spark could cause massive explosion," he acknowledged.

He provided letters sent by Houthi-appointed government officials last summer, including one from the foreign minister, approving the visit by the UN But the European diplomat said the Houthis revoked their initial approval and put new conditions on UN activities.

The UN has repeatedly warned that delays in taking action to fix the FSO Safer could lead to a man-made environmental disaster in the Red Sea four times greater than the Exxon Valdez oil spill.

The Exxon Valdez disaster in 1989 was one of the largest oil spills in U.S. history. The tanker spewed nearly 300,000 barrels of thick, toxic crude oil into Alaska's pristine Prince William Sound. Scores of herring, sea otters and birds were soaked in oil, and hundreds of miles of shoreline polluted. The spill destroyed the livelihoods of hundreds of commercial fishermen in the area.

The senior official at the state-owned company in charge of the tanker issued an appeal for help to the international community saying that a similar oil spill off the coast of Yemen could accelerate Yemen's worsening humanitarian disaster.

"The disaster could happen at any second," he said, "Rescue Yemen from a terrible, imminent disaster that will add to Yemen's burdens for tens of years and deprive thousands from their source of living, and kill marine life in the Red Sea."