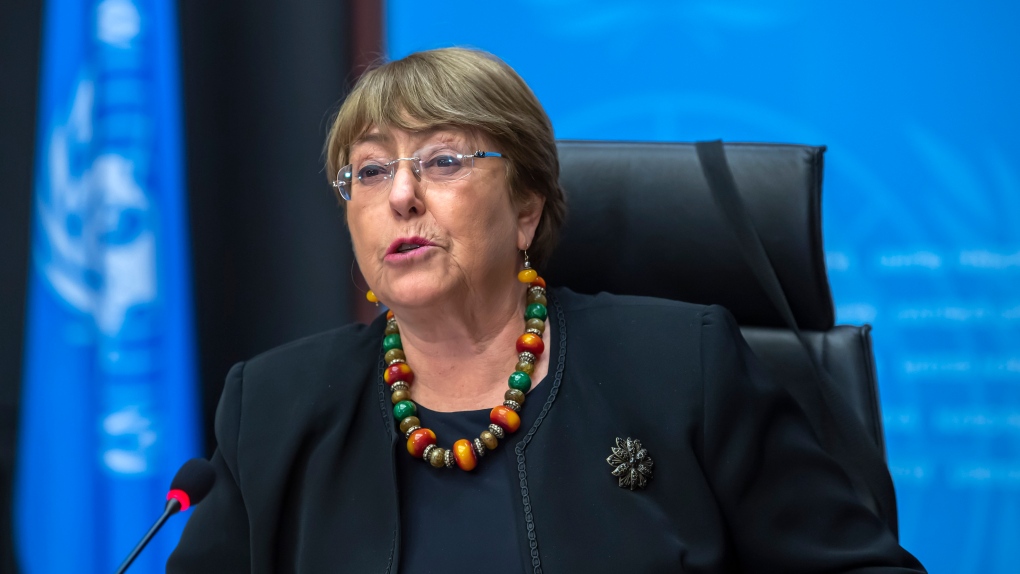 Michelle Bachelet, UN High Commissioner for Human Rights, speaks about 2020 and looking ahead to 2021, during a press conference at the European headquarters of the United Nations in Geneva, Switzerland, Wednesday, Dec. 9, 2020. (Martial Trezzini/Keystone via AP)

The United Nations high commissioner for human rights, Michelle Bachelet, has warned Myanmar is heading toward a "full blown conflict" with "clear echoes" of Syria in 2011, unless the international community steps in to stop the violence.

In a statement Tuesday, Bachelet urged states to take "immediate, decisive and impactful measures to push Myanmar's military leadership into halting its campaign of repression and slaughter of its people."

Her appeal referenced a bloody crackdown by security forces in the central town of Bago last week that killed at least 82 people and forced others to flee to nearby villages. Military forces fired on anti-coup protesters using assault rifles, rocket-propelled grenades (RPGs), and hand grenades, according to advocacy group Assistance Association for Political Prisoners (AAPP).

A Facebook post from the Bago University Students' Union said the military charged families 120,000 Myanmar kyat (CAD$107) to retrieve the bodies of relatives who died. Bachelet said there were also reports the military "prevented medical personnel from helping the wounded."

"There are clear echoes of Syria in 2011. There too, we saw peaceful protests met with unnecessary and clearly disproportionate force," she said. "The state's brutal, persistent repression of its own people led to some individuals taking up arms, followed by a downward and rapidly expanding spiral of violence all across the country."

Bachelet said countries "must not allow the deadly mistakes of the past in Syria and elsewhere to be repeated."

More than 700 people, including children, have died since the military overthrew Myanmar's elected government in a February 1 coup, according to AAPP. Since then, junta security forces made up of police, soldiers and elite counter-insurgency troops have embarked on a systematic crackdown against unarmed and peaceful protesters, detaining around 3,000 people, often in nighttime raids, and forcing activists into hiding.

The military has imposed curfews, put limits on gatherings and restricted access to the internet. Ousted civilian leader Aung San Suu Kyi and other members of her party, the National League for Democracy, have been detained and face charges in a secret court.

Some protesters have resorted to using makeshift weapons and handmade guns in an effort to defend themselves from the military. Others have sought training with ethnic rebel groups that have been fighting against the military and central government on and off for about 70 years in the country's borderlands, raising fears the country could be slipping toward a deepened civil war.

Former United States Ambassador to Myanmar Scott Marciel said in a Twitter post while "some are talking about the situation in Myanmar as civil war, a failed state, or a mass uprising" another comparison is "to a foreign occupying army -- zero legitimacy/support, beyond brutal, and willing to destroy everything for power."

Bachelet's statement came as anti-coup activists called for a week of protests to coincide with the annual New Year holiday, known as Thingyan. Tuesday marked the first day of the five-day holiday, which is usually celebrated with prayers, ritual cleaning of Buddha images in temples and jubilant public water fights on the streets.

Instead of the traditional water festivities and dance performances, opponents of the coup said they would not celebrate this year and are showing their anger at the generals who seized the country through low-key displays of defiance and small protests, according to Reuters.

"We do not celebrate Myanmar Thingyan this year since over 700 of our innocent brave souls have been killed," said one Twitter user named Shwe Ei, Reuters reported.

In several towns, protesters walked through the streets holding traditional Thingyan pots containing seven flowers and sprigs that are displayed at this time of year. Many people painted the protesters' three-finger salute on their pots. Others daubed messages such as "Save Myanmar" in silent shows of opposition to the military, according to Reuters.

However, the violence continued in some parts. In the town of Tamu in northern Sagaing region on Myanmar's border with India, junta forces raided barricades and shot at people's homes, AAPP reported. A man and a woman were shot dead by soldiers as they delivered milk in the town, AAPP and several other local media outlets reported.

CNN has reached out to Myanmar's military for comment.

Daily internet restrictions on wireless data and broadband services has meant information has slowed to a trickle, especially in areas far from the major cities.

In her statement, Bachelet said the "vast majority of people" have been left "without access to vital sources of information and communication."

As well as the thousands detained, Bachelet said there are reports that 23 people have been sentenced to death following secret trials, "including four protesters and 19 others who were accused of political and criminal offenses."

"The mass arrests have forced hundreds of people to go into hiding, and reports suggest that many journalists, civil society activists, celebrities and other public figures are being sought, many simply because of the dissent they have been expressing online," she said.

On Tuesday, Myanmar military-owned news channel Myawaddy TV aired photos of 20 health workers it said have been charged with incitement for being associated with the anti-coup Civil Disobedience Movement. Since the start of the coup, medics have been at the forefront of protests against military rule, and junta forces have targeted health workers, ambulances, and occupied dozens of hospitals.

For the past several weeks, the junta has aired a "wanted list" on the 8 p.m. broadcast showing photos of celebrities, journalists, actors, and artists charged under Section 505 (a) of the Criminal Code.

The legislation makes it a crime to "hinder, disturb, damage the motivation, discipline, health, conduct" of government employees and military personnel "and cause their hatred, disobedience, or disloyalty" toward the government or military.

The coup put a stop to Myanmar's gradual opening to democracy that saw 10 years of reform following half a century of military rule. Alongside the street protests and acts of resistance against the junta, thousands of striking workers and civil servants are taking part in the Civil Disobedience Movement, which is disrupting the economy.

"The country's economy, education and health infrastructure have been brought to the brink of collapse, leaving millions of Myanmar people without livelihood, basic services and, increasingly, food security," Bachelet said.

She called on countries with influence to cut off the supply of arms and finances to Myanmar's military to halt the "commission of grave human rights violations and possible crimes against humanity."

"Statements of condemnation, and limited targeted sanctions, are clearly not enough," she said.