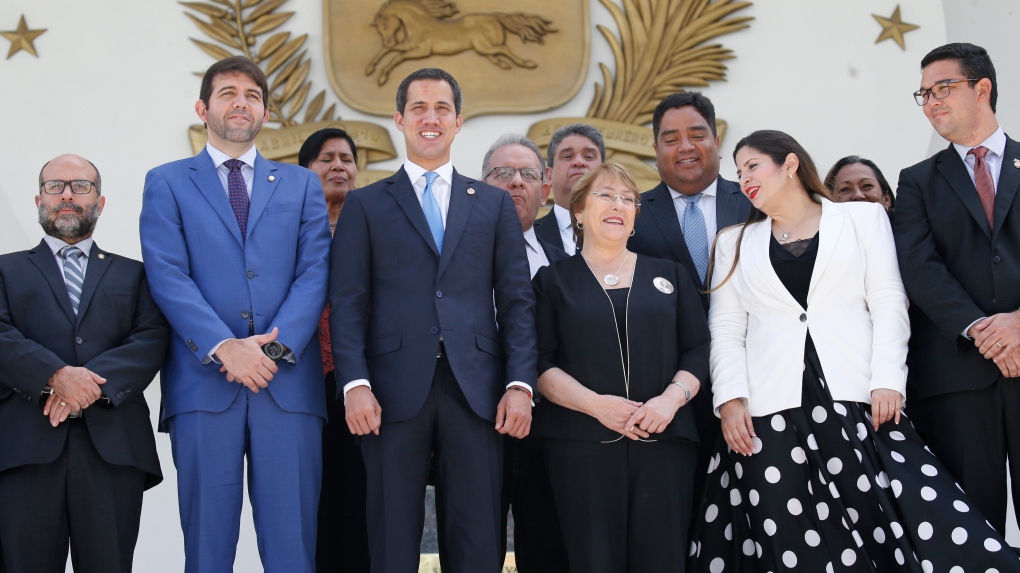 Emerging from their meeting, Guaido said he spoke with UN High Commissioner for Human Rights Michelle Bachelet about the need to expel Maduro from power and end Venezuela's "suffering."

"May this visit serve to bring solutions to the catastrophe that this country is experiencing," Guaido said on the steps of the opposition-controlled National Assembly. "This visit should serve to reinvigorate the fight in Venezuela."

Maduro, for his part, hailed Bachelet's visit as a "first step" in fostering stronger relations between Venezuela and UN human rights monitoring agency and he promised to earnestly consider her input.

"She can count on me to take her suggestions, recommendations and proposals with absolute seriousness," he said after their evening meeting.

Bachelet's first trip to the South American country as chief of the UN watchdog comes amid heightened international pressure on Maduro for allegedly silencing opponents with jail, torture and excessive violence. A once-wealthy oil nation, Venezuela is now experiencing a severe political and economic crisis that has driven a staggering 4 million people to flee. The socialist government struggles daily to keep the lights on and provide reliable drinking water.

Describing his closed-door conversation with Bachelet, Guaido said he emphasized that Maduro's government is still holding two opposition lawmakers in jail in addition to nearly 700 activists considered to be political prisoners.

Guaido said the high commissioner also appeared deeply concerned about human rights abuses, noting that she spent several hours on her visit this week with victims of violations and their relatives. She proposed opening a temporary office in the country to monitor human rights issues and allow her representatives to visit other regions, Guaido added.

Earlier this year, Bachelet issued a tough statement criticizing Maduro's government for harsh crackdowns on dissenters and reports of extrajudicial killings of poor, unarmed residents at the hands of security forces.

"I am also deeply concerned about the shrinking of the democratic space, especially the continued criminalization of peaceful protest and dissent," she said in the March statement.

Bachelet had already met with socialist party boss Diosdado Cabello, the Supreme Court head and attorney general, and completed her three-day visit by speaking with Maduro. The embattled president revealed few details about their meeting in a brief statement afterwards broadcast on state television.

Some have feared Bachelet will get a highly curated, unrealistic view of a crisis, while others have seen the trip as something of a minor triumph for rights activists.

Her predecessor, Zeid Ra'ad al-Hussein, was repeatedly denied access to the country for criticizing what he said was the government's refusal to recognize a humanitarian crisis.

In contrast, Maduro has rolled out the red carpet for Bachelet, who survived jail and exile during Chile's military dictatorship.

On the eve of her arrival, the government freed 28 opposition activists considered political prisoners, including a substitute lawmaker and 18 people detained during recent anti-government protests. Previously, Maduro began allowing the Red Cross to deliver humanitarian aid.

Appearing on state TV shortly before Bachelet's Wednesday arrival, Maduro said he was ready to hear out any of her proposals that aim to improve conditions in Venezuela.

"We greatly anticipate her visit," Maduro said. "It will be good for Venezuela's system of human rights."

Guaido has failed to seize power five months after launching a campaign to oust Maduro. But he has managed to win the recognition of more than 50 nations and galvanize international opinion.

Maduro maintains that his rival's efforts have been part of a U.S.-backed coup intended to remove him from office and exploit the nation's vast oil.

In recent weeks, Norway has hosted two rounds of talks between representatives of Maduro and Guaido, although the mediation effort has stalled over the opposition leader's insistence that the government agree to early presidential elections.

On Friday, protesters attempted to capitalize on Bachelet's visit by gathering outside the UN headquarters in Caracas. Some carried banners asking her for medical help, while others held empty baby strollers over their heads to call attention to crumbling hospitals which provide inadequate care to children.

Gilber Caro, an opposition lawmaker who was released this week after two months in jail, joined the crowd.

"My liberation is a partial liberation because first and foremost we need to free the people of Venezuela," Caro said, noting that he met with Bachelet to press for an end to Maduro's rule and free presidential elections.

"Venezuelans are demanding justice, demanding liberty, but above all a political transition to democracy."