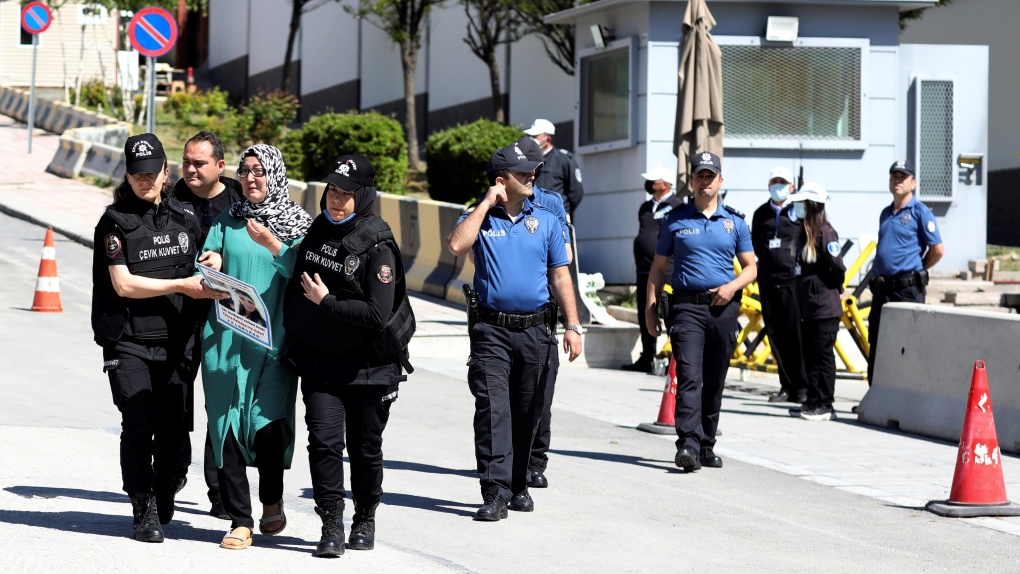 The top UN human rights official said Saturday that she raised concerns with Chinese officials about the impact of the broad application of counterterrorism and deradicalization measures on the rights of Uyghurs and other predominantly Muslim groups in China's Xinjiang region.

Michelle Bachelet, who visited the northwestern region as part of a six-day trip to China, said the visit was not an investigation but a chance to have direct talks with senior Chinese leaders and pave the way for more regular interactions to support China in fulfilling its obligations under international human rights law.

"It provides an opportunity for me to better understand the situation in China, but also for the authorities in China to better understand our concerns and to potentially rethink policies that we believe may impact negatively on human rights," she said in a video news conference before leaving the country.

Bachelet's measured words, while expected, did not satisfy activists and likely will not sit well with governments such as the United States, which have been critical of her decision to visit Xinjiang. China's ruling Communist Party, which has vehemently denied all reports of human rights violations and genocide in Xinjiang, showed no sign of being open to change in a government statement on the trip.

The statement, attributed to Vice Foreign Minister Ma Zhaoxu, accused some Western countries and anti-China elements of fabricating sensational lies about Xinjiang under the guise of human rights. It said that the government had adopted lawful measures to combat violent terrorism and brought security, stability and prosperity to the region in China's northwest.

"The Chinese side pointed out that essentially, Xinjiang is not at all a human rights issue, but a major issue concerning upholding national sovereignty, security and territorial integrity," the statement said. "All ethnic groups of Xinjiang belong to the family of the Chinese nation."

Agnes Callamard, the secretary general of Amnesty International, said that Bachelet should condemn human rights violations in Xinjiang, and call on China to release people arbitrarily detained and end systematic attacks on ethnic minorities in the region.

"The high commissioner's visit has been characterized by photo opportunities with senior government officials and manipulation of her statements by Chinese state media, leaving an impression that she has walked straight into a highly predictable propaganda exercise for the Chinese government," Callamard said in a news release.

Bachelet, making the first visit by a UN high commissioner for human rights to China in 17 years, said she raised the lack of independent judicial oversight for a system of internment camps that swept up a million or more Uyghurs and other ethnic minorities, according to estimates by experts.

China, which describes the camps as vocational training and education centers to combat extremism, says they have been closed. The government has never publicly said how many people passed through them.

Bachelet, who visited a prison and a former center in the Xinjiang city of Kashgar, noted the reliance by police on 15 indicators to determine "tendencies towards violent extremism" that could result in detention, the allegations of use of force and reports of unduly severe restrictions on religious practices.

"It is critical that counterterrorism responses do not result in human rights violations," she said. "The application of relevant laws and policies, and any mandatory measures imposed on individuals, need to be subject to independent judicial oversight, with greater transparency of judicial proceedings. All victims must be able to seek redress."

Bachelet described as "deeply worrying" the arrest of lawyers, activists, journalists and others under Hong Kong's national security law, noting the semi-autonomous Chinese city's reputation as a center for human rights and independent media in Asia.

She said it is important to protect the linguistic, religious and cultural identity of Tibetans and that they be allowed to participate fully and freely in decisions about their religious life. "I ... stressed the importance of children learning in their language and culture in the setting of their families or communities," she said.

Before her trip, Bachelet heard from Uyghur families living abroad that have lost contact with their relatives. In her meetings in China, she said she appealed to authorities to make it a priority to take steps to provide information to families.

"To those who have sent me appeals asking me to raise issues or cases with the authorities, I have heard you," she said. "Your advocacy matters and my visit was an opportunity to raise a number of specific situations and issues of concern with the government."

The UN and China agreed to set up a working group to hold follow-up discussions on a range of issues, including the rights of minorities, counterterrorism and human rights, and legal protection, Bachelet said.