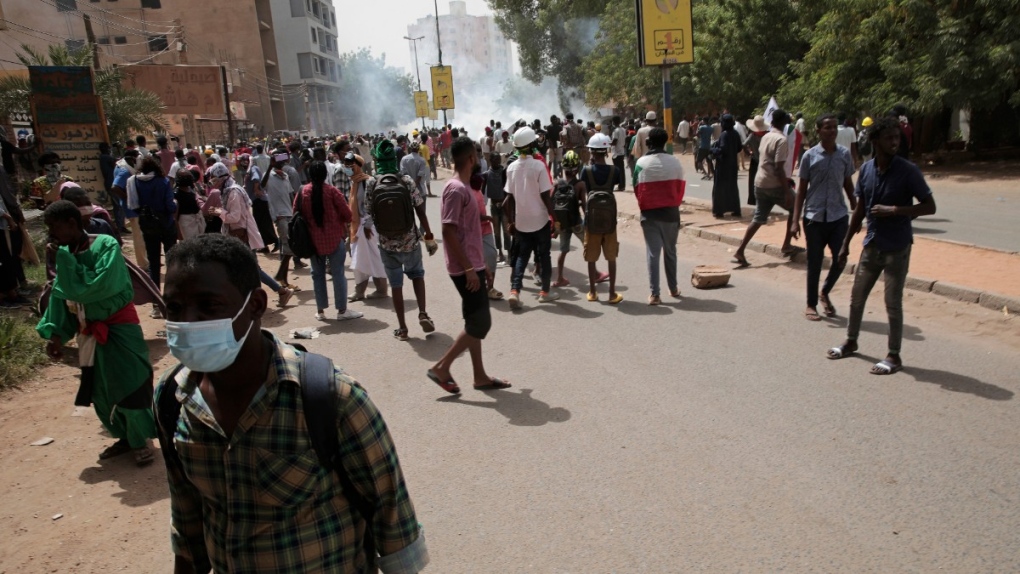 Protesters clash with security forces as they fire teargas to prevent them from marching toward the presidential palace during demonstrations demanding civilian rule, in Khartoum, Sudan, May 19, 2022. (AP Photo/Marwan Ali)
CAIRO -

Sudan’s leading general lifted a state of emergency Sunday that was imposed in the country following the October coup he led.

The decision by Gen. Abdel-Fattah Burhan, head of Sudan’s ruling sovereign council, came hours after the Security and Defence Council, Sudan’s highest body that decides on security matters, recommended an end to the state of emergency and the release of all detainees.

The recommendations are meant to facilitate dialogue between the military and the pro-democracy movement, the defence minister, Maj. Gen. Yassin Ibrahim Yassin, said in a video statement. They come as the country faces protests against military rule and an unknown number of activists and former officials remain in detention.

Earlier Sunday, the UN envoy for Sudan, Volker Perthes, called for the country’s leaders to lift the state of emergency. He decried the killing of two people in a crackdown on pro-democracy protesters who once again took to the streets of the capital to denounce the Oct. 25 coup.

“Once again: It is time for the violence to stop,” said Perthes on Twitter.

Hundreds of people marched Saturday in Khartoum, where security forces violently dispersed the crowds and chased them in the streets, according to activists. The two were killed during protests in Khartoum’s Kalakla neighbourhood. One was shot by security forces and the other suffocated after inhaling tear gas, said the Sudan Doctors Committee, which is part of the pro-democracy movement.

Sudan has been plunged into turmoil since the military takeover upended its short-lived transition to democracy after three decades of repressive rule by former strongman Omar al-Bashir. Al-Bashir and his Islamist-backed government were removed by the military in a popular uprising in April 2019.

Saturday’s protests were part of relentless demonstrations in the past seven months calling for the military to hand over power to civilians. At least 98 people have been killed and over 4,300 wounded in the government crackdown on anti-coup protests since October, according to the medical group. Hundreds of activists and officials in the disposed government were also detained following the coup, many were later released under pressure from the UN and other western governments.

The protesters demand the removal of the military from power. The generals, however, have said they will only hand over power to an elected administration. They say elections will take place in July 2023 as planned in a constitutional document governing the transition period.

The UN, the African Union and the eight-nation east African regional group called the Intergovernmental Authority in Development have been leading concerted efforts to bridge the gap between the two sides and find a way out of the impasse.

Meanwhile, the trial of four activists accused of killing a senior police officer during a protest earlier this year began Sunday amid tight security outside the Judicial and Legal Science Institute in Khartoum. Dozens of protesters gathered in the area in a show of support for the defendants.

The four were detained in raids after police Col. Ali Hamad was stabbed to death as security forces dispersed protesters on Jan. 13. Their defence lawyers deny the allegations.

The court’s judges in Sunday’s proceedings ordered the defendants be medically examined after their lawyers claimed they were tortured and mistreated in police detention. The trial resumes June 12.

I am appalled by the violent death of two young protesters in Khartoum yesterday. One again: it is time for the violence to stop, time to end the state of emergency, time for a peaceful way out of the current crisis in Sudan.