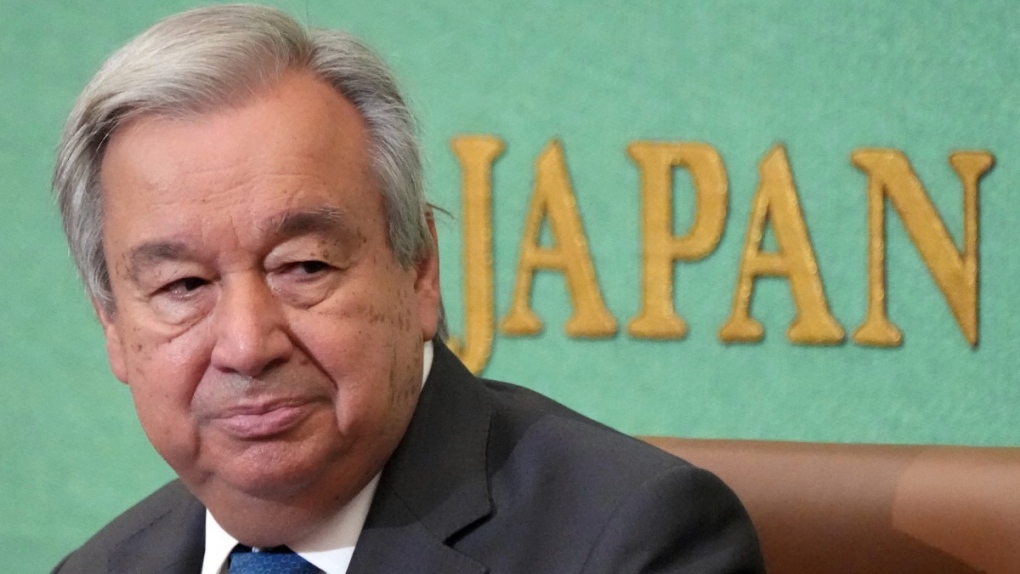 United Nations Secretary-General Antonio Guterres on Monday urged countries with nuclear weapons to stick to their no-first-use commitment of their atomic arsenals, warning that the nuclear arms race has returned amid growing international tension.

"This is the moment to ask the nuclear-armed countries to commit to the principle of non-first-use and to commit to not use and not threaten the non-nuclear countries," Guterres said at a news conference in Tokyo, two days after he visited Hiroshima to commemorate victims of the Aug. 6, 1945, atomic bombing.

"I think that nobody, nobody can accept the idea that a new nuclear war would happen. This will be the destruction of the planet," Guterres said. "What is clear is if nobody uses for the first time then there will be no nuclear war."

Fears of a third atomic bombing have been on the rise amid Russia's threats of a nuclear attack since its war on Ukraine began in February.

On Thursday, Moscow shelled the Ukrainian city of Zaporizhzhia, which holds Europe's largest nuclear plant. When asked about the attack, Guterres said, "Any attack to a nuclear plant is a suicidal thing."

He said he fully supports the International Atomic Energy Agency in their effort to stabilize the plant and have access to the facility to exercise its mandate.

Guterres said that after decades of nuclear disarmament efforts, the world is now "moving backwards," noting that the world already has 13,000 nuclear bombs and huge investment going into modernization of atomic arsenals. "So this is the time to say: Stop it."

Guterres said that the billions of dollars being used in the arms race should be spent on other pressing issues.

"The billions that are being used in this arms race need to be used to fighting climate change, fighting poverty, addressing the needs of the international community," he said.

He said he will be also going to Mongolia and South Korea to discuss ways to address North Korea's nuclear development.

Asked about China's ongoing military exercises surrounding Taiwan in response to U.S. House Speaker Nancy Pelosi's visit last week to the self-governing island, Guterres said the UN abides by the general assembly resolution supporting the "One China" policy, which acknowledges Beijing's view that it has sovereignty over Taiwan, but considers Taiwan's status as unsettled.

"We all want that resolution to correspond to a peaceful environment," he said, calling for "common sense and then restraint, allowing for de-escalation."

Earlier Monday, Guterres met with Japanese Foreign Minister Yoshimasa Hayashi and shared "serious concern about the tense situation in the region and concurred on the importance of de-escalating the tension," the ministry said in a statement.

At a time when geopolitical tensions are rising and the nuclear threat is back in focus, Japan's strong and consistent voice on peace is more important than ever, Guterres said, urging Japan to use its unique position as the world's only country to have suffered atomic attacks to act as "a bridge-builder and peacemaker to strengthen global cooperation and trust and solidarity."

Guterres said he is counting on Japan's potential to take leadership on the global fight against climate change, and specifically urged Tokyo to stop funding coal plants.

Japan, which has not clarified the timing when it will fully ban coal-fired plants, has been seen as reluctant to commit itself to banning coal power as soon as many European countries.

Current efforts in Japan, the world's third-largest economy, are focused on developing methods to burn ammonia in conventional coal-fired plants and gradually phasing out use of coal possibly sometime in the 2040s. Japan also aims to promote the "clean coal" technology in Asia to achieve zero emissions.

Energy experts and critics say Japan currently has overly ambitious targets for nuclear energy to supply 20%-22% of its energy mix by 2030. By that time, the country has promised to cut emissions to 46% of 2013 levels.

"There is no such thing as clean coal," Guterres said. "For a real change, I hope Japanese public and private capital will stop financing coal completely."

Guterres said he expects Japan, through multilateral development banks, to "immediately deliver investments and support for developing countries to expand renewables and build climate resilience" to find solutions that fit their needs in addressing the climate emergency.

"I call for Japan to make the right choice -- for Japan and for the world," he said.

This story corrects the timing of Guterres' meeting with Hayashi. It was before the news conference, not afterwards.

A former Canadian senator is facing sexual assault charges in connection with incidents that allegedly took place nearly a decade ago.

Rescuers searched for survivors among the ruins of Florida's flooded homes from Hurricane Ian while authorities in South Carolina began assessing damage from its strike there as the remnants of one of the strongest and costliest hurricanes to ever hit the U.S. continued to push north.