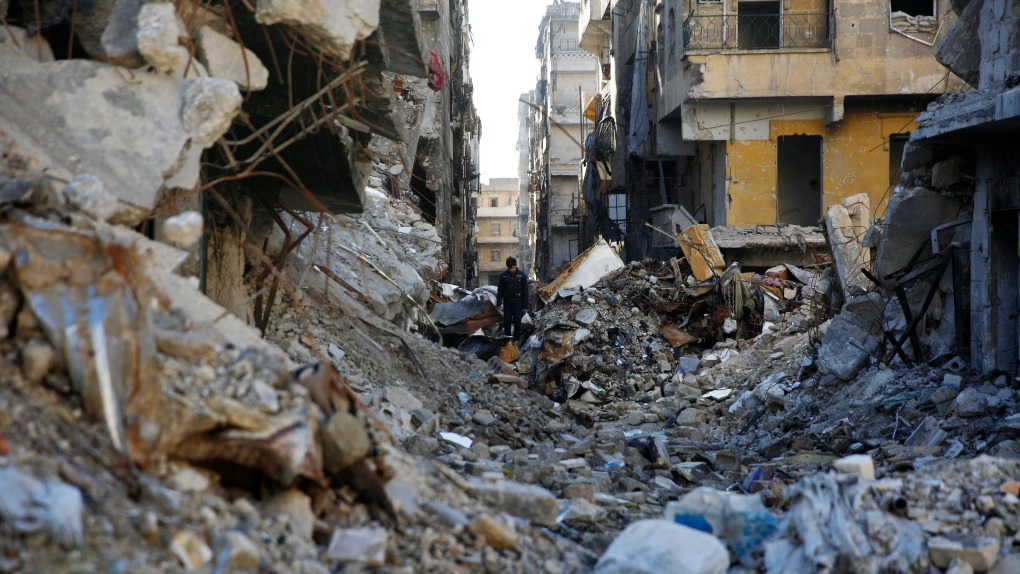 A man walks through rubble in the Salaheddine neighborhood in the eastern Aleppo, Syria, Saturday, Jan. 20, 2018. (AP Photo/Hassan Ammar)

Secretary-General Antonio Guterres is again calling on the UN Security Council to refer Syria to the International Criminal Court, pointing to "serious violations" including blocking aid deliveries and medical care to millions.

The UN chief also called on all combatants, UN member states and civil society to co-operate with an independent panel established by the General Assembly in December 2016 to assist in the investigation and prosecution of those responsible for war crimes or crimes against humanity in Syria.

Guterres said in a report to the council circulated Friday on the humanitarian situation in Syria in December that "accountability for serious violations is a requirement under international law and central to achieving sustainable peace."

During December, he said, no aid was delivered to over 417,000 people in nine "besieged" locations, and only 60,000 of the nearly 2.5 million Syrians living in "hard-to-reach" areas received humanitarian help. He said 95 per cent of the besieged population is besieged by Syrian government forces.

Guterres said "access for the United Nations and its partners to those people living in besieged and hard-to-reach locations remained a critical concern."

He said deliveries of food and other aid remained "extremely challenging" in many areas last month "as a result of active conflict, shifting conflict lines, administrative impediments and deliberate restrictions imposed on the movement of people and goods by the parties to the conflict."

The secretary-general singled out the deteriorating humanitarian situation for the estimated 393,000 people living in eastern Ghouta, an opposition-held pocket besieged by Syrian forces. Prices for basic goods there are some 30 times higher than in neighbouring Damascus city, "far beyond the purchasing power of most residents," he said.

Guterres noted that between Dec. 26-28, 29 urgent medical cases were evacuated from eastern Ghouta. But he said "an additional 600 people remain in need of urgent medical evacuation" and "18 have already died while waiting to be evacuated."

The UN chief called on all countries with influence over the Syrian government and opposition fighters "to do their utmost" to facilitate medical evacuations and humanitarian aid into eastern Ghouta.

While Guterres again urged that Syria be referred to the International Criminal Court, the search for justice has proven to be exceedingly difficult, especially at the United Nations.

A Security Council resolution backed by more than 60 countries to refer the Syrian conflict to the ICC was vetoed by both Russia and China in May 2014.

A new attempt at the council to refer Syria to the ICC would almost certainly face a similar fate.

But following the double veto, several countries, including Sweden, Germany, France and Finland, said they were investigating or prosecuting alleged perpetrators of grave crimes in Syria.

In November, Russia also vetoed renewal of the expert body from the UN and the Organization for the Prohibition of Chemical Weapons that was determining responsibility for chemical weapons attacks in Syria.

On Tuesday, Russia's UN Ambassador Vassily Nebenzia called a Security Council meeting and circulated a draft resolution that would replace the JIM.

The council session coincided with a meeting in Paris where the U.S., France and 22 other countries launched a new organization aimed at identifying and punishing anyone who uses chemical weapons.

U.S. Ambassador Nikki Haley called the Security Council meeting a distraction, saying the U.S. is ready to re-establish the JIM "with its original independent and impartial mandate, right now. But anything less is unacceptable."