Ukrainian president asks PM who disparaged him to stay 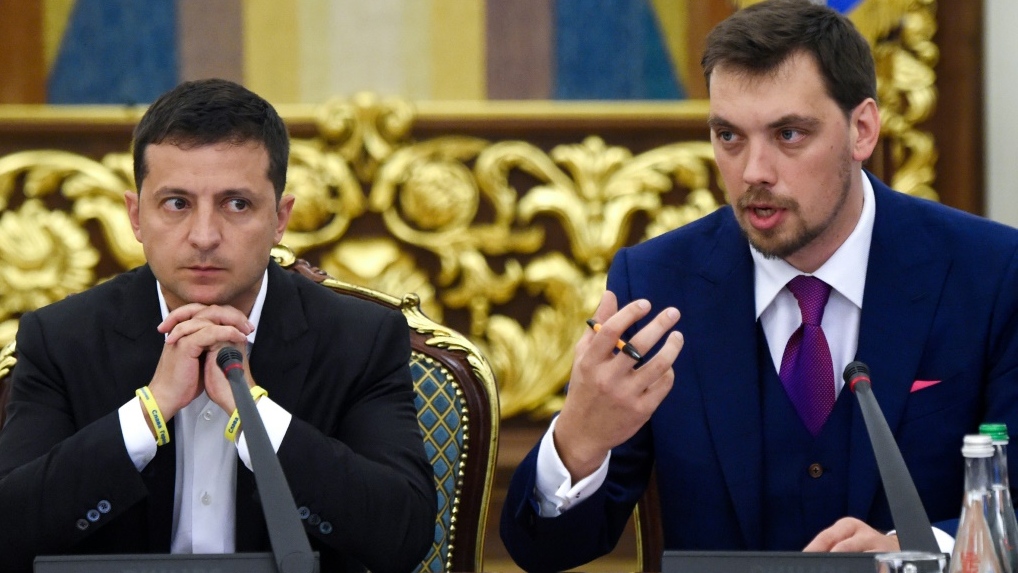 The office of Zelenskiy (L) office said it had received the letter of resignation from Goncharuk (R) and would consider it. (AFP)

KYIV, UKRAINE -- Ukrainian President Volodymyr Zelenskiy rejected his prime minister's offer to resign and asked him to stay on the job Friday after he was caught on tape saying Zelenskiy -- a former sitcom star with no previous political experience -- knows nothing about the economy.

In a video released by Zelenskiy's office, the president called the situation "unpleasant" but said he had decided to "give a chance" to Prime Minister Oleksiy Honcharuk and his Cabinet.

The furor comes at a fraught moment for Zelenskiy, who has found himself in the middle of the impeachment case unfolding against President Donald Trump in Washington. Trump stands accused of withholding nearly $400 million in military aid to Ukraine to pressure the country's leader to investigate Trump political rival Joe Biden.

In a Facebook post earlier Friday, Honcharuk praised Zelenskiy as "an example of transparency and decency to me" and added: "In order to dispel any doubts about our respect and trust for the president, I have written a resignation letter and submitted it to the president for introduction to parliament."

The offer to step down was subject to approval by the Rada, Ukraine's parliament. But analysts expressed doubt the resignation would come to pass.

Ukraine's president fears prompting a political crisis in the country by doing it and doesn't want to complicate his relationship with foreign investors and the International Monetary Fund, said Volodymyr Sidenko, an analyst with the Razumkov Center think-tank .

"Honcharuk's resignation can destroy the idea of the government's unity and cast a doubt on Zelenskiy's ability to control the situation," Sidenko said.

Earlier this week an audio recording surfaced in which Honcharuk appeared to make disparaging comments about Zelenskiy's understanding of economics. He called Zelenskiy "a layman" in economics and said the president should be better educated about the national currency.

Zelenskiy is a 41-year-old former comedian whose only political experience before his election last spring consisted of playing a Ukrainian president on TV. He starred in "Servant of the People" as a high school history teacher who is propelled to the highest office after his rant against government corruption goes viral.

Honcharuk said that the recording was a compilation of "fragments of recorded government meetings," and he blamed unidentified "influential groups" for making it look as if he didn't respect the president.

"It is not true," the prime minister insisted.

On Thursday, lawmakers from the opposition party Opposition Platform-For Life demanded Honcharuk's resignation, saying he and his cabinet had discredited Ukraine's president and exacerbated the economic crisis in the country. Members of the ruling Servant of the People party said there were no grounds for Honcharuk to step down.

The scandal shows that different political forces have started a fight for the position of prime minister, according to Fesenko, the political analyst. Sidenko blamed Ukrainian oligarchs, saying they are trying to destabilize the country politically because the strengthening of the nation's currency hurts their export-related businesses.

Zelenskiy called for an investigation into the source of the recording, saying, "I demand that in two weeks, as soon as possible, we obtain information on who was recording the tapes."

While Zelenskiy is a member of Servant of the People party and Honcharuk is an independent, it was Zelenskiy who proposed him to the parliament as prime minister.