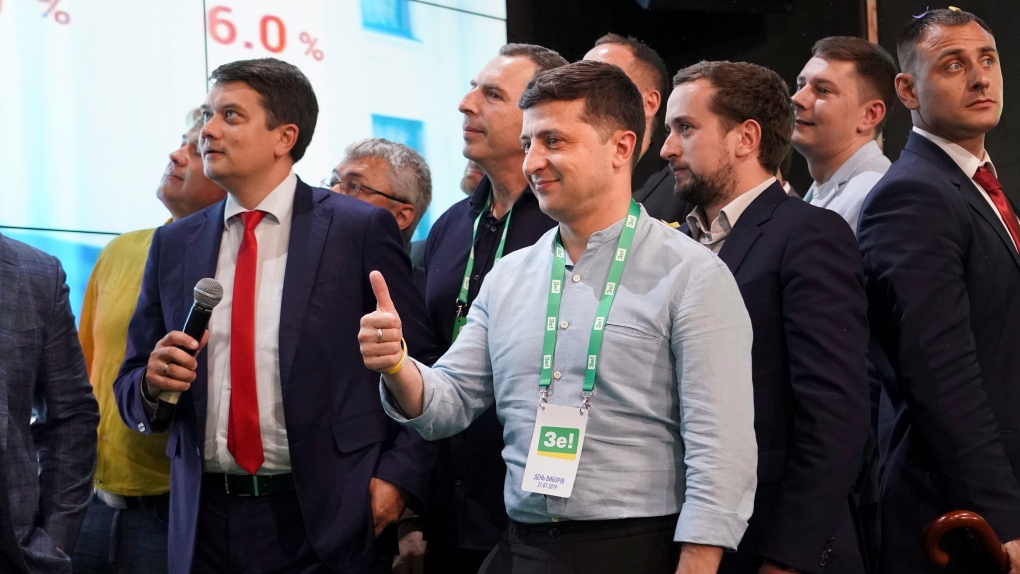 Ukrainian President Volodymyr Zelenskiy, center, reacts with his team as they look at the election results at his party's headquarters after a parliamentary election in Kiev, Ukraine, Sunday, July 21, 2019. Zelenskiy's party took the largest share of votes in the country's snap parliamentary election, an exit poll showed Sunday. (AP Photo/Evgeniy Maloletka)

KIEV, Ukraine -- The party of Ukraine's president was on track Monday to win an absolute majority in parliament, a first in the country's modern history that would hand President Volodymyr Zelenskiy a clear mandate for change.

Zelenskiy, a popular comedian and political novice who was elected in April, pushed for a snap election that was held Sunday. He argued that the allies of former President Petro Poroshenko who dominated parliament were hampering his reform agenda.

With more than 70% of ballots counted Monday, his party, Servant of the People, had 42.7% of the vote. In addition, results showed his allies winning in at least 125 of the 199 single-mandate constituencies, in which voters cast ballots for individuals, not parties.

The landslide win would give Zelenskiy the go-ahead to fight corruption, to try to bring peace to Ukraine's separatist-controlled east, and to fix the country's stagnant economy without needing to forge a coalition with other political players.

The new parliament should focus on legislation to fight corruption, cleanse the courts system and scrap the law that makes deputies immune from criminal prosecution, Servant of the People leader Dmytro Razumkov told reporters Monday.

Servant of the People was named after the television comedy in which Zelenskiy, 41, played a school teacher who unexpectedly becomes the Ukrainian president.

The next few months are likely to be crucial for him and the party, which will likely have a free hand to appoint top officials and to adopt legislation. On the other hand, Zelenskiy will have no political rivals strong enough on which to blame possible failures.

"The results at the polls will give Zelenskiy a pliable government and free his hands from the shackles of the former establishment," said Serhiy Shapovalov, an analyst with Kyiv-based think-tank Democratic Initiatives.

"Zelenskiy has gained political clout very fast and has transitioned from a comedian into a politician who can wield influence in all branches of power in Ukraine," he said.

Of the 424 seats in the Ukrainian parliament, 225 lawmakers are elected on party rolls and 199 in the single-mandate districts.

Four other parties were seen clearing the 5% threshold necessary to get party-list seats based on the preliminary vote count.

A party led by one of Russian President Vladimir Putin's closest associates, Ukrainian tycoon Viktor Medvedchuk, was in second place with 13% of the vote. It was followed by the European Solidarity party of ex-president Poroshenko, whom Zelenskiy defeated in a landslide in the country's spring presidential election.

The election monitoring mission of the Organization for Security and Cooperation in Europe said in its preliminary report Monday that "fundamental rights and freedoms were overall respected and the campaign was competitive."

However, the observers cited wide-spread vote-buying and abuse of power by incumbent lawmakers.

The OSCE lauded the vote as "an opportunity to consolidate reforms and changes in politics that Ukrainian voters are hoping for."