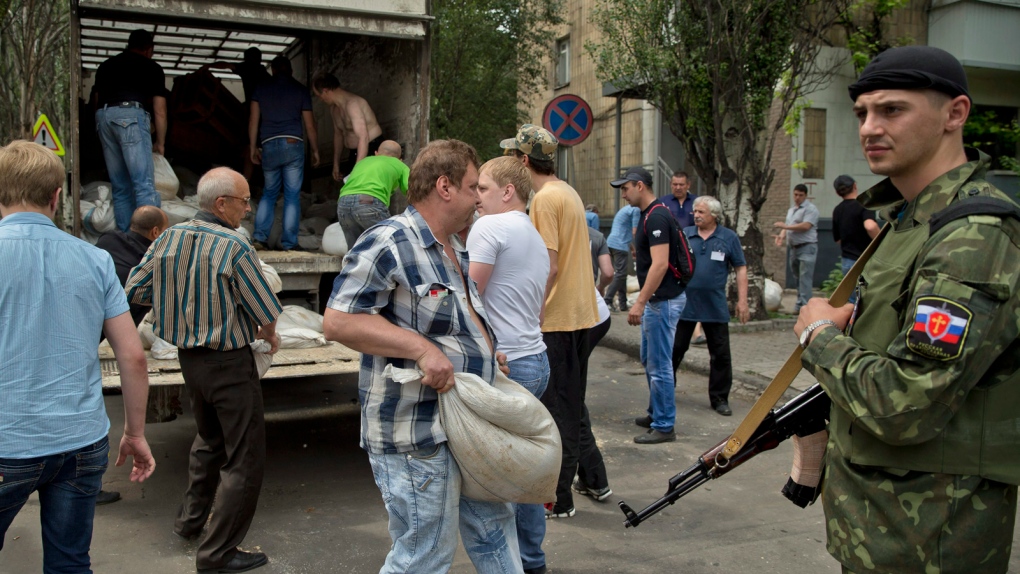 People carry sand bags to set up a shooting position as a pro-Russian gunman watches on the road leading from the the airport to Donetsk, Ukraine, Tuesday, May 27, 2014. (AP / Vadim Ghirda)

DONETSK, Ukraine -- As separatists conceded that militants from Russia's province of Chechnya had joined the rebellion, a Ukrainian government official cautioned Wednesday that its borders had become a "front line" in the crisis.

Chechnya's Moscow-backed strongman brushed away allegations he had dispatched paramilitary forces under his command to Ukraine, saying he was powerless to stop fellow Chechens from joining the fight.

While there is no immediate indication that the Kremlin is enabling or supporting combatants from Russia crossing into Ukraine, Moscow may have to dispel suspicions it is waging a proxy war if it is to avoid more Western sanctions.

The Kremlin welcomed the election Sunday of billionaire Petro Poroshenko as the president of Ukraine. An advocate of strong ties with Europe, Poroshenko also favours mending relations with Russia.

He replaced the pro-Moscow leader who was driven from office in February. That ouster led to Russia's annexation of the Crimean Peninsula in southern Ukraine -- which triggered the sanctions -- and a violent pro-Moscow insurgency in the east.

Reports circulate almost daily of truckloads of gunmen crossing from Russia, and authorities believe they are a vital reinforcement to the armed rebel force that has repeatedly thwarted government security operations. Intense fighting from a government offensive Monday to dislodge rebels from the Donetsk airport appeared to have died down, with only sporadic violence reported Wednesday.

Ukrainian border service head Mykola Lytvyn said he has deployed all reserves to the eastern and southern frontiers.

"Our border, especially in the Donetsk and Luhansk regions, has become a front line that various terrorists are trying to break through," Lytvyn said at a news conference in Kyiv. "Daily fighting with terrorists and groups of criminals near the Ukrainian and Russian border have become our routine reality."

Russians who cross into Ukraine by road must go through passport and customs control on both sides of the border, a procedure that usually takes several hours. But these controls would be virtually nonexistent for those who drive across fields.

The Kyiv government condemns the roiling insurgency as the work of "terrorists" bent on destroying the country, while rebels insist they are only protecting the interests of the Russian-speaking population of the east.

Russia denies mass border crossings are taking place, although separatist leaders of the self-proclaimed Donetsk People's Republic now freely admit their ragtag army has many foreigners, including some from the Russian province of Chechnya.

Alexander Borodai, who calls himself the prime minister of the republic, said the fighters from the northern Caucasus, although not ethnically Russian, "share much of the same ideology."

"And you know, sometimes, representatives of the North Caucasus turn out to be even more Russian than (ethnic) Russians themselves," he added.

The militia of the Donetsk People's Republic is a force of uncertain strength, composed of units of varied provenance and abilities.

At least one militiaman participating in a parade Sunday in central Donetsk wore a patch identifying him as belonging to a Cossack unit from southern Russia. Others were identified as members of a division calling itself the Russian Orthodox Army. Many of those questioned insist they are either local or from Crimea.

Sergeyev urged the council to demand that Russia withdraw its soldiers and paramilitary groups from the country. He said Moscow must also appeal to hundreds of Chechens, Cossacks and mercenaries to leave Ukraine.

Churkin said the Security Council should call on Ukraine to end the "military chaos" in the east and "acknowledge the need to take into account the interests of all citizens of the country." He said it's very difficult to talk about dialogue "when you're killing people."

Donetsk Mayor Oleksandr Lukyanchenko said that some fighters admitted for treatment after Monday's clashes were from cities in Chechnya.

It is this Chechen contingent that has aroused the most alarm in Ukraine.

Chechen leader Ramzan Kadyrov was a former rebel who fought Russian forces in the first of two devastating separatist wars and switched sides during the second campaign, when his father became the region's pro-Russia leader. Following his father's death in a rebel bombing, Kadyrov stabilized the region, relying on generous Kremlin funding and his ruthless paramilitary forces, which have been blamed for extrajudicial killings, torture and other abuses.

Kadyrov's forces, known for their warrior spirit and deadly efficiency, helped Russia win a quick victory in a 2008 war with Georgia. The 37-year-old leader has vowed an unswerving fealty to Russian President Vladimir Putin and praised his policy in Ukraine.

The Chechen leader has derided allegations that he dispatched militias to Ukraine, but also undermined such assertions by peppering them with veiled threats.

"If the Ukrainian authorities want so much to see 'Chechen units' in Donetsk, why go to Donetsk if there is a good highway to Kyiv?" he said in a statement posted Wednesday on his Instagram account.

Although the presence in Ukraine of an unspecified number of armed Russians is now confirmed, it is far from evident that they have Moscow's outright blessing.

Fyodor Lukyanov, editor of Russia in Global Affairs Magazine, wrote this week that Moscow is aware that support for insurgents in Ukraine could translate into punitive Western action. He argued Moscow would instead likely seek guarantees that Ukraine will not join NATO.

"Our neighbour's complete fragmentation in a bid to prevent that would be too expensive, risky and unpredictable," Lukyanov wrote in a commentary posted on online Gazeta.ru.

But Gleb Pavlovsky, a political strategist who has advised the Kremlin, warned that the insurgency has gained enough momentum to keep going without Moscow's orders.

"It shouldn't be seen as being controlled by one button. You can push this button once, but you can't push it again to recall the command," he said on Ekho Moskvy radio.

Still, it is unclear what a realistic ultimate goal might be for the insurgency, since even Russia has proven reluctant to publicly grant its patronage.

Russia has supported a Swiss-brokered peace plan of the Organization for Security and Cooperation in Europe that calls for ending hostilities and launching a political dialogue. It accuses Ukraine of failing to observe it.

Donetsk was calm but tense Wednesday, as Ukrainian fighter jets flew overhead around midday. The airport, about 10 kilometres (6 miles) from the heart of the city, was the scene of heavy fighting Monday, with dozens of rebels killed after being pushed out of the terminal.

Separatists' barricades have been erected at a crossroads near the airport, and sporadic gunfights were reported in the area. An Associated Press Television News crew saw as one man dragged away by a pro-Russian militia in a nearby residential zone.

In Slovyansk, a city about 90 kilometres (55 miles) north of Donetsk that has seen constant clashes recently, residential areas came under mortar shelling from government forces. Several people were wounded and some building damaged in the attack.

Authorities accuse insurgents of placing firing positions in inhabited areas, forcing the army to endanger civilians by returning fire. Although Ukrainian troops may outnumber the rebels and enjoy the advantage of air support, their edge is dulled by poor co-ordination and apparent anxiety about engaging in urban combat.

Laura Mills in Kyiv, Alexander Zemlianichenko in Slovyansk, Ukraine, and Vladimir Isachenkov in Moscow contributed to this report.