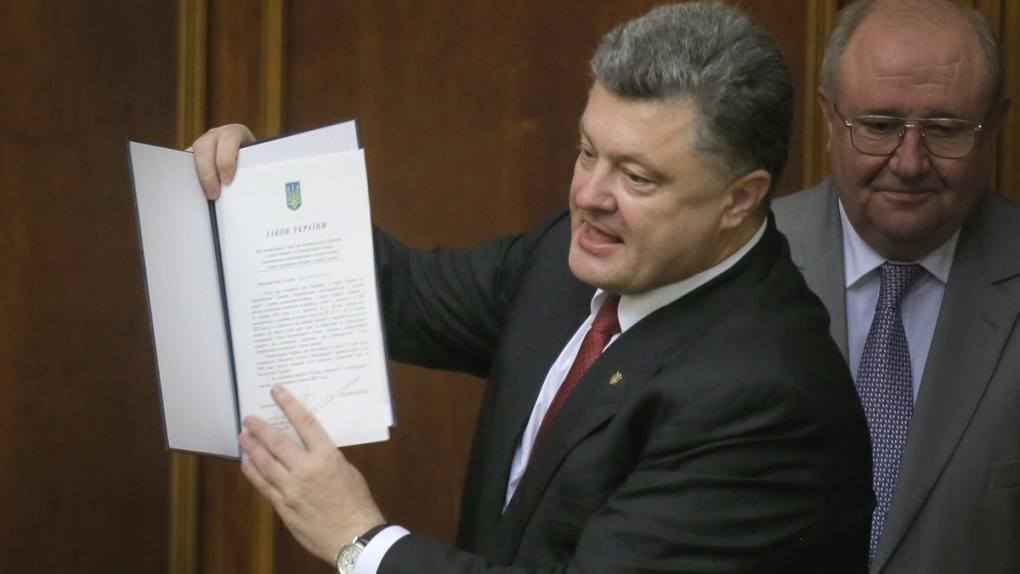 KYIV, Ukraine -- Ukraine moved to resolve months of crisis Tuesday by strengthening ties to Europe and loosening some controls over the country's rebellious eastern regions where it has been fighting Russian-backed separatists.

The actions by lawmakers began to flesh out the emerging picture of a new Ukraine, where a determined pivot toward Europe has come at great cost: concessions to Russia and a war with rebels that killed more than 3,000 people and pushed the West's relations with Moscow to Cold War-era lows.

The measure deepening the economic and political ties with Europe was the issue that sparked the crisis last fall, when then-President Viktor Yanukovych's decision to shelve the deal in favour of closer ties with Russia sparked protests by hundreds of thousands. Those demonstrations eventually drove him from power in February and led to the annexation of Crimea by Moscow and the rebellion in the east, where a shaky cease-fire began Sept. 5.

After parliament ratified the measure, lawmakers leapt to their feet to applaud and sing the Ukrainian national anthem. A live broadcast of the session was beamed to the European parliament.

President Petro Poroshenko called the vote a "first but very decisive step" toward bringing Ukraine fully into the European Union.

He said the protesters who died in clashes with riot police in Kyiv and the government troops killed by rebels in the east "have died not only for their motherland. They gave up their lives for us to take a dignified place among the European family."

"After World War II, not a single nation has paid such a high price for their right to be European," he said. "Can you tell me, who now after this will be brave enough to shut the doors to Europe in front of Ukraine?"

Earlier Tuesday, the parliament also approved laws granting temporary self-rule to rebellious, pro-Russian regions in the east, as well as amnesty for many of those involved in the fighting.

The lawmakers took that action behind closed doors, in stark contrast to the patriotic fanfare of that vote on the European agreement. In his thunderous speech, Poroshenko did not mention those two measures, which are likely to generate far more controversy among Ukrainians.

One of the laws calls for three years of self-rule in parts of eastern Ukraine and for local elections in November. It grants concessions that were not offered in a peace plan that Poroshenko put forward three months ago when he became president, such as local oversight of court and prosecutor appointments and local control of police.

A separate bill calls for amnesty for those involved in the eastern fighting, although not for persons suspected or charged with crimes including murder, sabotage, rape, kidnapping and terrorism. The law also does not grant amnesty to those who have tried to kill Ukrainian law enforcement officials and servicemen -- meaning that most of the separatists, who have waged war for five months on government forces, could not be eligible.

The decision to hold a closed-door session -- an anomaly in the Ukrainian parliament -- underscored the political challenges of the measures. Although Poroshenko did not mention the bills in his speech, he was later quoted by Interfax-Ukraine as saying that he felt "we are obliged to take a step to ensure that the other side takes corresponding steps" toward peace.

Alexander Zakharchenko, the leader of the rebels in the Donetsk region, told Russia's RIA Novosti news agency that the separatist leadership would study the measures, an unusually conciliatory statement compared to the rebels' previous assertions that they aim for complete independence.

"By forging ahead with this agreement in the face of great challenges, Ukraine's leaders have carried out the will of the Ukrainian people, who demonstrated their overwhelming support for further integration with Europe last winter and with their votes in the May 25 presidential elections," said Marie Harf, deputy spokeswoman at the State Department.

Harf also applauded the passage of the amnesty and self-rule measures, saying they were "two important commitments Ukraine made in the Minsk cease-fire agreement on Sept. 5." She urged Russia and the separatists to begin immediate and full implementation of the cease-fire agreement.

The passage of the measures came as Poroshenko begins his first state visit to Canada and the U.S., where he will address a joint session of Congress on Thursday and is also scheduled to speak to the UN General Assembly next week.

The EU association agreement was long sought by Ukrainians who want their country to turn westward and out of Russia's sphere of influence, and its passage was welcomed by many in Kyiv, even if they also were worried about some of the government's actions.

"I participated in the protests, and we've been waiting for this for so long," said Rostislav Sezov, adding that he didn't oppose greater autonomy for regions in the east.

"Let us be smaller but better. Let us be a core that is oriented toward Europe," he said.

During the protests in February, the EU's flag -- the same blue and yellow as Ukraine's -- was seen everywhere. That symbol faded into the background as demonstrators, who set up camp on Kyiv's Independence Square, fended off riot police night after gripping night with barricades of bricks and burning tires.

But even after Russia annexed Ukraine's Black Sea peninsula of Crimea in March and a pro-Russian rebellion broke out in eastern Ukraine in April, the new Kyiv government made it clear that it would not back down from the EU deal.

Russia has strongly opposed Ukraine's tilt toward the EU and it has threatened that the reduction of tariffs on Western goods would force it to limit the influx of Ukrainian products into Russia.

In a significant concession to Moscow, Ukraine and the EU agreed last week to delay the full reciprocal implementation of a reduced-tariff regime until at least 2016.

Both Brussels and Kyiv have asserted that other parts of the agreement, such as major political and economic reforms in Ukraine, will not be delayed, but those compromise efforts have many Ukrainians worried that its government is giving away too much to Moscow.

Alexander Sinegub, an entrepreneur who was walking in downtown Kyiv, said he had "mixed feelings" about the EU deal.

"Nothing has been cleaned up. They've put a bunch of more-or-less patriots at the top of the government, but beneath them everybody has stayed the same. Half a year has passed and yet it's somehow sad to look at all of this," he said.

Also on Tuesday, Russian Defence Minister Sergei Shoigu said the military will increase its forces in Crimea due to the "exacerbation of situation in Ukraine and increased foreign military presence near our borders." He said Russia will have a "full-fledged" force deployed to Crimea, but wouldn't give any details.

The cease-fire in eastern Ukraine has been riddled by violations from the start. On Tuesday, the city council in Donetsk said three people died and five were wounded in shelling overnight.

Col. Andriy Lysenko, a spokesman for Ukraine's national security council, said three Ukrainian servicemen were killed in the past day. Clashes continue in the area around the airport in Donetsk, the largest city under rebel control.

On Monday, a shell hit a municipal bus in downtown Donetsk, killing one person and injuring another. Evgeniy Medvedev said his mother, Tatiana, was killed on the bus, and he covered her body with a jacket. He said she had been at work when the firing started, and got on the municipal bus to get out of the neighbourhood.

"She tried to escape from there, but the shell caught up with her anyway," he said.