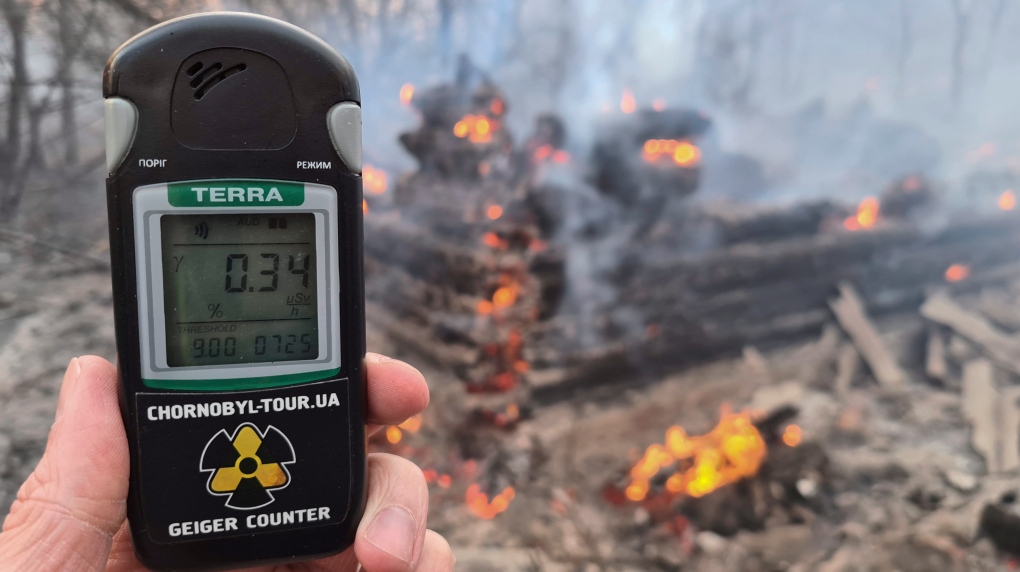 A Geiger counter shows increased radiation level against the background of the forest fire burning near the village of Volodymyrivka in the exclusion zone around the Chernobyl nuclear power plant, Ukraine, Sunday, April 5, 2020. (AP Photo/Yaroslav Yemelianenko)

KYIV, UKRAINE -- Emergency teams in Ukraine on Monday continued battling a forest fire in the contaminated area around the Chernobyl nuclear power plant that has raised radiation fears.

Police said they tracked down a person suspected of starting the blaze by setting dry grass on fire in the area. The 27-year-old man said he burned grass "for fun" and then failed to extinguish the fire when the wind caused it to expand quickly.

Two blazes erupted Saturday in the zone around Chernobyl that was sealed after the 1986 explosion at the plant.

Firefighters said they managed Monday to put out the smaller of the two fires, which engulfed about five hectares (12 acres), but the second one continued burning, covering about 20 hectares (50 acres). They said they were using aircraft to extinguish the blaze.

The 2,600-square-kilometre (1,000-square-mile) Chernobyl Exclusion Zone was established after the April 1986 disaster at the plant that sent a cloud of radioactive fallout over much of Europe. The zone is largely unpopulated, although about 200 people have remained despite orders to leave.

Blazes in the area have been a regular occurrence. Some of them start when residents set dry grass on fire in the early spring -- a widespread practice in Ukraine, Russia and some other ex-Soviet nations that often leads to devastating forest fires.

Ukrainian police said that they beefed up patrols in the area around the Chernobyl zone to prevent new fires.