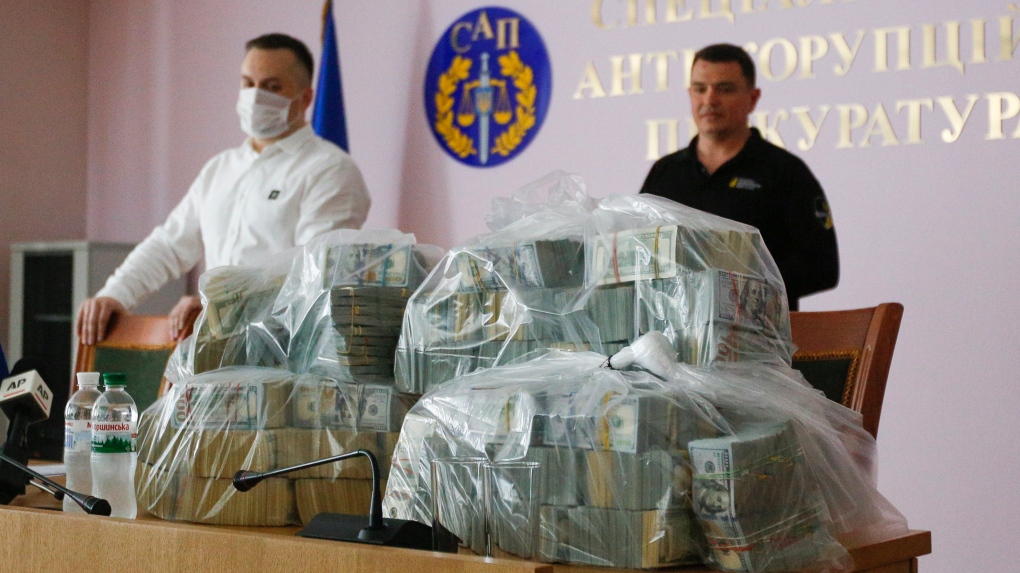 Ukraine's Anti-Corruption Prosecutor Nazar Kholodnytsky, left, and National Anti-Corruption Bureau chief Artem Sytnik at a pile of USD 6 million in plastic bags during a briefing in an anti-corruption prosecutor's office in Kyiv, Ukraine, Saturday, June 13, 2020. Ukrainian authorities say they have intercepted a USD 6 million bribe attempt at dropping a criminal investigation against the head of the Burisma natural gas company where former US Vice President Joe Biden's son once held a board seat. (AP Photo/Efrem Lukatsky)

MOSCOW -- Ukrainian authorities say they have intercepted an attempt to offer a $6 million bribe in return for the dropping of a criminal investigation into the head of a natural gas company where the son of former U.S. Vice-President Joe Biden once held a board seat.

At a Saturday news conference, Ukraine's anti-corruption prosecutor Nazar Kholodnitsky said neither of the Bidens is connected to the bribe attempt.

Kholodnitsky and the head of the national anti-corruption bureau, Artem Sytnik, said the bribe was intended to encourage their offices to close an investigation of Mykola Zlochevsky, the head of the Burisma natural gas company and a former minister of ecology.

Zlochevsky is suspected of using his ministerial position to enrich his gas company.

Burisma, one of the country's largest private gas producers, has been at the centre of politically tinged allegations in the United States, where Joe Biden is the main challenger to President Donald Trump in this year's election.

Biden's son, Hunter, joined the Burisma board in 2014, when his father was still vice-president and the main figure of U.S. relations with Ukraine; he left the position in 2018.

Former Ukrainian prosecutor-general Viktor Shokin has alleged he was pushed out by pressure from Biden, by delaying a $1 billion loan to the country, in order to halt an investigation into Hunter Biden's role at Burisma. But Joe Biden says he pushed for Shokin's dismissal to encourage Ukraine's anti-corruption efforts.

Three people, including a high-ranking tax service official, have been detained in connection with the attempted bribe.