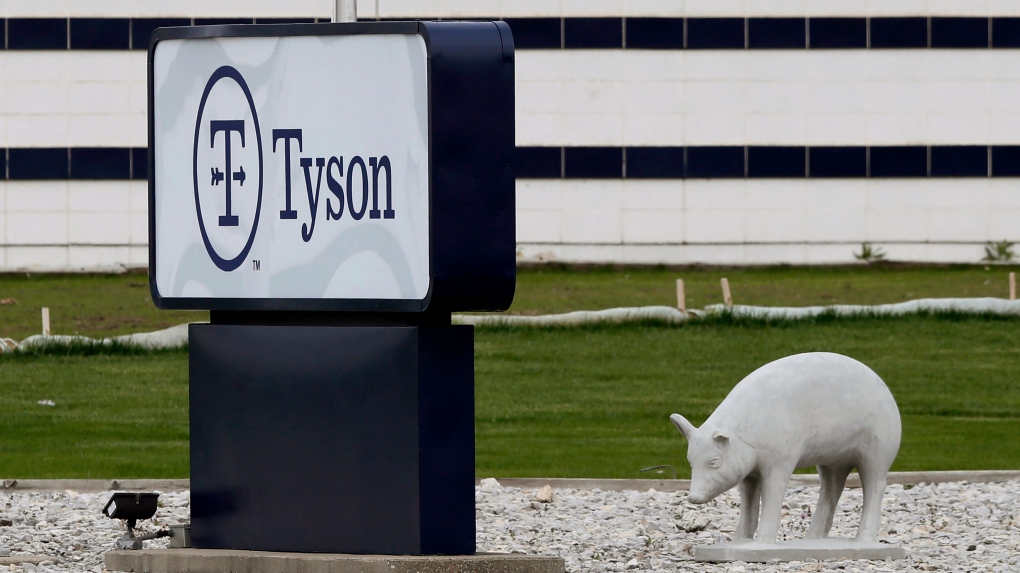 In this May 1, 2020, file photo, a sign sits in front of the Tyson Foods plant in Waterloo, Iowa. A group of worker advocacy organizations has filed a civil rights complaint with the U.S. Department of Agriculture alleging that meat processing companies Tyson and JBS have engaged in workplace racial discrimination during the coronavirus pandemic. The complaint alleges the companies adopted polices that reject U.S. Centers for Disease Control and Prevention guidance on distancing and protective gear on meat processing lines. The complaint says the operating procedures have a discriminatory impact on mostly Black, Latino, and Asian workers. (AP Photo/Charlie Neibergall, file)

Several worker advocacy organizations have filed a civil rights complaint with the U.S. Department of Agriculture alleging that meat processing companies Tyson and JBS have engaged in racial discrimination during the coronavirus pandemic.

The complaint filed Wednesday alleges the companies adopted polices that violate a section of the Civil Rights Act of 1964, which protects individuals from racial discrimination by recipients of federal financial assistance.

Tyson has received more than US$109 million from USDA programs this year and JBS more than $45 million, the complaint said. As recipients of federal taxpayer dollars they are required to comply with federal laws.

"When they took that money, they knew at that point that they would be held accountable to the Civil Rights Act of 1964, but they continued to violate that act," said Joe Henry, director of Forward Latino, one of the groups filing the complaint. Others include the Food Chain Workers Alliance, HEAL Food Alliance, American Friends Service Committee of Iowa and the Idaho Organization of Resource Councils.

Coronavirus infections were first reported in meatpacking plants in March and since then at least 32,151 COVID-19 cases have been confirmed among workers in 291 plants and at least 122 meatpacking workers have died, the complaint said.

A CDC report released Tuesday found 87 per cent of those coronavirus cases occurred among racial and ethnic minorities even though they make up 61 per cent of the worker population.

After the outbreaks were uncovered, meatpacking plants began providing workers with face coverings, installed shields between work stations and implemented new procedures for distancing during breaks, but they declined to adopt other U.S. Centers for Disease Control and Prevention recommendations for keeping people at least 6 feet apart. The companies also declined to initiate slower speeds on production lines or add shifts to enable social distancing, the complaint said.

The complaint alleges the operating procedures have a disparate impact on Black, Latino, and Asian workers, who make up a large share of production workers at the companies' plants, representing a pattern or practice of racial discrimination.

Tyson spokesman Worth Sparkman said in an email that the company was still reviewing the complaint and noted that the company's top priority is the health and safety of all workers, their families and the communities where plants are located.

"We've transformed the way our plants operate to protect our team members, implementing measures such as symptom screening before every shift," he said.

JBS did not immediately reply to messages and a USDA spokesman declined to comment.

The complaint goes to the USDA through an administrative procedure and it will be up to Secretary of Agriculture Sonny Perdue to decide how it's resolved. The procedure could result in an agreement between the worker groups, the USDA and the companies or it could take years to get to a final resolution if there's no agreement, said Dave O'Brien, a civil rights attorney in Cedar Rapids who handled such complaints in the Obama administration's Labor Department.

The complaint filed on Wednesday asks the Civil Rights Division of the USDA to investigate and remedy the discrimination and for the agency to suspended or terminate funding to the companies if they do not comply with federal laws.