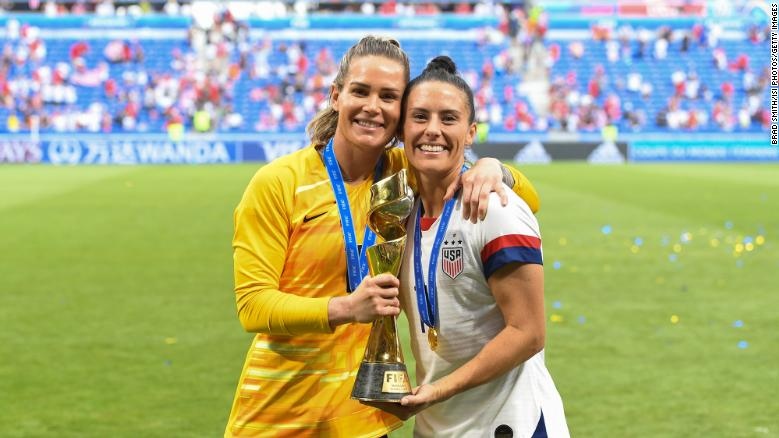 U.S. women's national soccer team players Ashlyn Harris and Ali Krieger tied the knot on Saturday in their much-anticipated wedding at the Vizcaya Museum and Gardens in Miami.

The two met while playing for the U.S. National Team in 2010, according to People magazine, and have been dating for almost a decade. The newlyweds have yet to post wedding pics, but family and friends have provided curious fans with glimpses of the couple's happy day.

Even before the wedding, the pair was serving incredible white-on-white matching looks at their rehearsal dinner. Krieger's brother, Kyle, posted some beautiful pre-wedding moments.

Kyle Krieger and the soon-to-be-married couple posed for some rehearsal dinner pictures, which he shared on Twitter.

The wedding preparations weren't all sunshine and kisses, though.

"Wedding day in Miami off to a wet start!!!" Kyle said on Twitter, captioning a video of the couple sprinting through the Miami rain with coffees in hand.

The two transformed from soaked to stunning for the ceremony. Kyle posted a picture with his sister at the wedding under the shining Florida sun.

Teammate Megan Rapinoe attended the celebration and snapped a selfie with Harris, who is wearing a Thom Brown suit.

In an interview in March, Harris told People the two are excited to see the larger impact of their marriage as a lesbian couple.

"I think so much of our support from our family and friends have been through soccer and this is just so much more meaningful, in my opinion, to be celebrated for love and acceptance and inclusion, that's so major in the world we live in now," she told People.

As a celebrity couple, the two have an enormous platform on which to share their love and increase LGBTQ representation on social media.

Also in the interview, the couple discussed how they initially hid their relationship in order to remain professional, but also because they feared how fans and coworkers would react.

Now, the couple is basking in the love and acceptance they have received as they share their love with the public.

"But in the end, we had such a great outpouring of just love and acceptance, and we're so grateful for how we're continuing to progress and move forward in society, and being accepted for being authentically who we are," Harris told People.

The couple told the magazine they won't be able to honeymoon until after the 2020 Olympics, but are planning to go somewhere tropical such as Bora Bora or the Maldives.