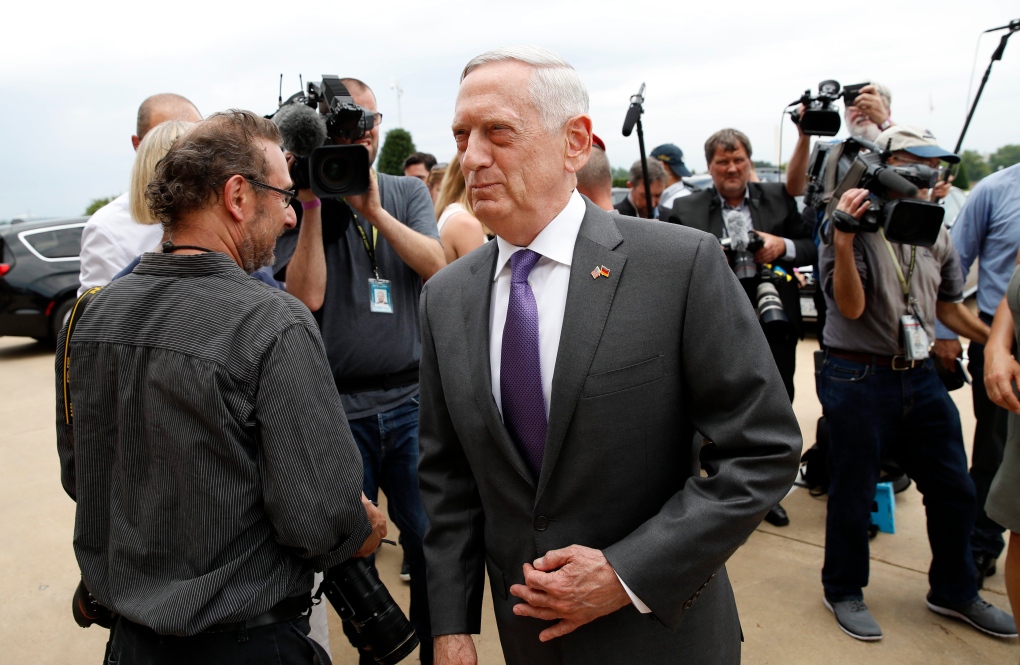 In this Wednesday, June 20, 2018, file photo, U.S. Defense Secretary Jim Mattis, center, steps away after speaking with the media at the Pentagon. (AP Photo/Alex Brandon, File)

WASHINGTON -- Stricter Trump administration immigration policies have stymied Pentagon plans to restart a program that allowed thousands of people with critical medical or Asian and African language skills to join the military and become American citizens, according to several U.S. officials.

The decade-old program has been on hold since 2016 amid concerns that immigrant recruits were not being screened well enough, and security threats were slipping through the system. Defence officials shored up the vetting process, and planned to relaunch the program earlier this month.

But there was an unexpected barrier when Homeland Security officials said they would not be able to protect new immigrant recruits from being deported when their temporary visas expired after they signed a contract to join the military, the U.S. officials said. They were not authorized to publicly describe internal discussions and spoke on condition of anonymity.

The program is called Military Accessions Vital to the National Interest program, or MAVNI. The plan to restart it was backed by Defence Secretary Jim Mattis, who believes that noncitizens can bring key skills, language abilities, and cultural knowledge to the military.

Mattis, a combat veteran of multiple war tours, has fought with and commanded foreign nationals, and he believes their service adds to the lethality of America's fighting force, according to the officials.

The Pentagon chief told reporters late last month that the program is designed to enlist immigrants with needed skills. "We need and want every qualified patriot willing to serve and able to serve," Mattis said. At the time, he said the department was working diligently to address the security screening problems.

When asked about the latest developments, Air Force Maj. Carla Gleason, a Pentagon spokeswoman, said, "the unique skill sets these individuals bring is one of the reasons the U.S. military is the world's premier fighting force." She had no comment on the internal discussions to relaunch the program.

The officials familiar with the discussions said Homeland Security told the Pentagon that it would not be able sign any agreement blocking the deportation of the immigrant recruits brought in under the program.

In previous years, the U.S. Citizenship and Immigration Service used an informal process to give MAVNI recruits protection when their temporary or student visas expired because they were entering military service. In addition, Congress included new restrictions in the 2019 defence bill that limit each military service to 1,000 such recruits per year.

President Donald Trump has made tighter controls on immigration, both legal and illegal, an important element of his administration.

Asked about the issue, a Homeland Security official said recruits without legal immigration status would be subject to deportation, but each case is reviewed individually. The official spoke on condition of anonymity to discuss internal deliberations.

Over the past 10 years, the military services have recruited more than 10,000 immigrants through the program.

In recent years, however, the program has been mired in controversy amid growing concerns about security threats and struggles to develop a proper screening process.

According to court documents, more than 20 people in the program have been the subject of FBI or Pentagon counterintelligence or criminal investigations since 2013.

Gleason said the Defence Department suspended the program in 2016 after several classified assessments concluded that it "was vulnerable to an unacceptable level of risk from insider threats such as espionage, terrorism, and other criminal activity."

Army Secretary Mark Esper, another advocate of the program, said recently that about of 80 per cent of MAVNI recruits who have gone through screening were approved and enlisted into the service. But he added that the Army must "exercise due diligence, to make sure we understand who is coming into our ranks and just do that. The process is never quick enough, certainly for them, and for me as well."

Since the program's suspension in 2016, hundreds of immigrants have been stalled in the intake process, waiting a year or more to get through the updated screening.

Dozens of the immigrant recruits were discharged or had their contracts cancelled as the background checks dragged on, leading to complaints and lawsuits. Defence officials said the delays were likely because the remaining applicants required more complicated security checks that take longer to complete.

In response to the suits, the Army stopped processing discharges last month and reinstated at least three dozen recruits who had been thrown out of the service.

Officials said the Pentagon is exploring other ways to adjust or replace the program in order to bring immigrants with those skills into the military. But the officials said it will be difficult and that it probably will take a good deal of time.

The struggle with the program comes as the administration has imposed more stringent rules for immigration, aimed largely at the country's border with Mexico.

Those moves reflect Trump's calculation that his promise to end illegal immigration and build a wall along that border fueled his election, and that stressing the same issues will drive voters to the polls and help the GOP retain its majorities in the Senate and House.

The MAVNI program, however, is not targeted at Spanish speakers, because the military has a large number of those. Instead, according to the Pentagon, the top languages spoken by recruits brought in through the program are Korean, Chinese Mandarin, Nepalese, Hindi, Swahili, Tagalog, French, Yoruba, Russian and Portuguese Brazilian.