U.S. to disclose name of Saudi sought by 9/11 victims 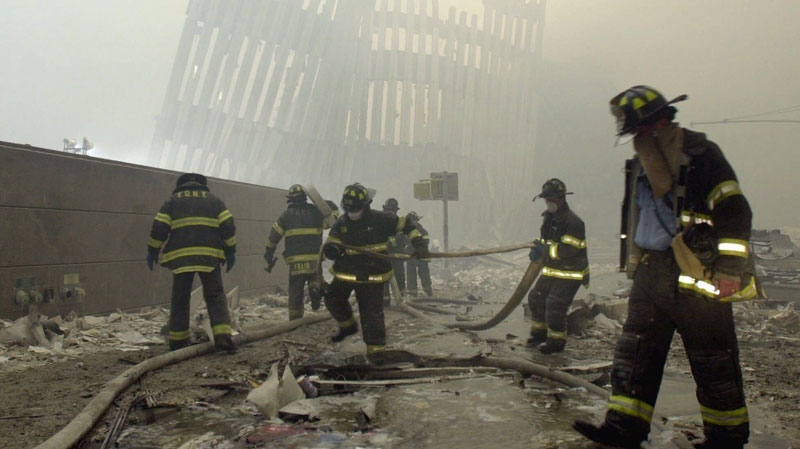 With the skeleton of the World Trade Center twin towers in the background, New York City firefighters work amid debris on Cortlandt St. after the terrorist attacks Tuesday, Sept. 11, 2001. (AP / Mark Lennihan)

WASHINGTON - The U.S. said Thursday that it will disclose the name of a Saudi citizen sought by lawyers for victims of the Sept. 11 attacks who want to link the kingdom to the terrorist plot.

Attorney General William Barr had the option of invoking a “state secrets” privilege to withhold the release of the name, which lawyers for survivors and victims' relatives believe belongs to a Saudi government official who they say assigned two men in California to assist two of the hijackers.

Instead, Justice Department lawyers said in a court filing that the FBI will make the name available to a limited circle of people that includes lawyers for survivors and victims' relatives as well as to attorneys for the Saudi government. The decision is a big step forward for Sept. 11 victims, who allege in a long-running lawsuit that Saudi Arabia provided support for the attacks.

“The September 11 terrorist attacks were the most lethal in our nation's history, and the FBI has long been committed to providing the families of the victims with transparency regarding its investigation of the events of that tragic day, consistent with maintaining the national security and the FBI's overriding goal of preventing future terrorist attacks,” the court filing states.

The person's name was redacted in a 2012 FBI report suggesting that the FBI had been investigating three people in connection with aid to the hijackers. Those include two men whose names have already been released who were thought to have assisted two of the hijackers, and a third who tasked them with doing so.

Victims' relatives believe that name could help them in establishing a link between the Saudi government and the Sept. 11 attacks, which is a matter of dispute. Barr invoked “state secrets” to block the release of other information in that report that he says could harm national security if released.

“This is a good result,” Terry Strada, national chair of the 9/11 Families & Survivors United for Justice Against Terrorism, said in a statement. “The families are dedicated to getting to the truth, and we shouldn't have to beg for this sort of basic information, or be kept in the dark, about the Saudi role in the attacks.”

There has been speculation of official involvement since shortly after the attacks, when it was revealed that 15 of the 19 attackers were Saudis and Osama bin Laden, the leader of al-Qaida at the time, was from a prominent family in the kingdom.

The U.S. investigated some Saudi diplomats and others with Saudi government ties who knew hijackers after they arrived in the U.S., according to documents that have been declassified.

The plaintiffs note that much more information has come to light since that report, and the existence of the FBI report in 2012 shows that authorities were continuing to investigate years after the attack.

The suit, filed in 2003 in federal court in New York, has gained some traction recently.

A 2016 law permits foreign governments to be held liable in American courts for acts of terrorism. And a judge last year rejected a Saudi request to dismiss the case and instead ordered discovery into whether the government had a role in the attacks.