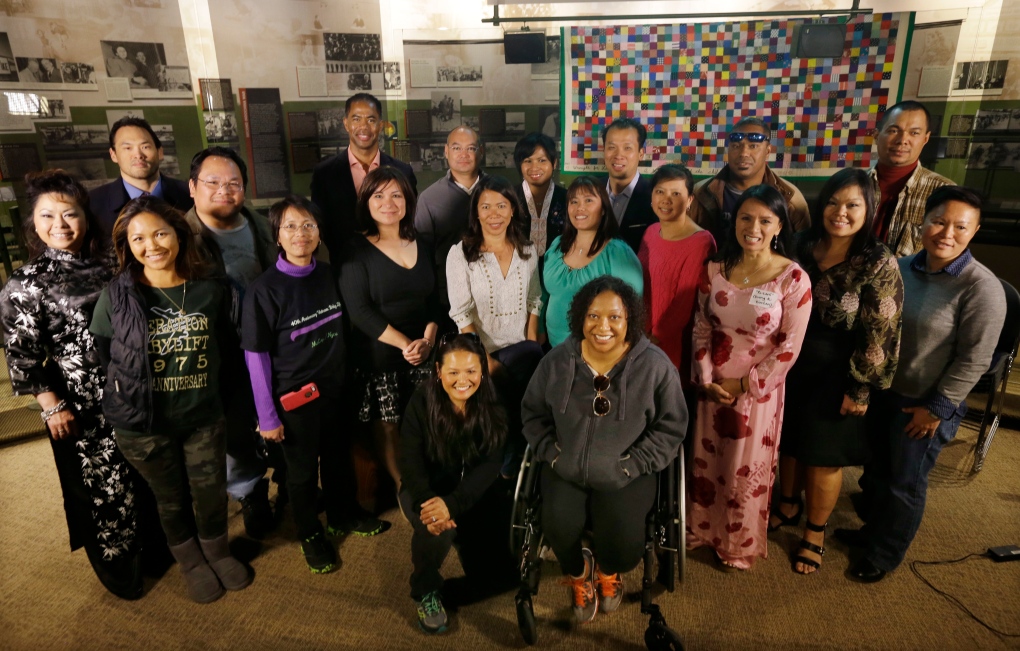 A group of former Vietnamese orphans pose for photographs during ceremonies commemorating the 40th anniversary of Operation Babylift from Vietnam on April 25, 2015, in Holmdel, N.J. As children, many only infants, they were airlifted to the U.S., near the end of America's involvement in the Vietnam War. (\Mel Evans / AP Photo)

HOLMDEL, N.J. -- With the Viet Cong making their final push toward taking Saigon in April 1975, the fate of thousands of Vietnamese orphans was uncertain until President Gerald Ford ordered remaining U.S. forces to evacuate the children.

Forty years after the final flight of Operation Babylift left Vietnam, 20 evacuees and their adopted families gathered Saturday for a reunion along with some of the servicemen who took part in the rescue.

"Operation Babylift is one of the few great things to come from the Vietnam tragedy," said Lana Mae Noone, organizer of the event staged at the New Jersey Vietnam Veterans Memorial.

Noone also is the founder of the website Vietnam Babylift, which aims to connect adoptees, their families and veterans involved with the mission. In all, 2,547 children were rescued and adopted by families in the United States and allied countries.

Noone, 68, of Garden City, New York, adopted her two daughters -- Heather and Jennifer -- after they were among the last children evacuated to the United States. Heather developed pneumonia on her way to America, and died in May 1975.

"I promised her I would make sure babylift would never be forgotten," Noone said.

Dressed in a black ao dai, a traditional Vietnamese silk dress, Leah Heslin, 42, said she looked forward to meeting other adult adoptees who, like her, were raised in America but find interest in their Vietnamese heritage.

"It's been very exciting, very anxious. I'm kind of nervous," said Heslin, who attended with her adoptive mother, Carole Heslin, 72. "It brings it back to home a little bit."

Participants dedicated a plaque inscribed with the names of 138 children, volunteers and soldiers who perished when their C-5A Galaxy crashed while headed to Clark Air Base in the Philippines.

Greg Gmerek, a medic for the 9th Air Evac Squadron, survived the crash.

"Mud was flying at me and I went flying around all over the place" recalled Gmerek, who was not strapped in because all the seats were strapped with two children a piece. "We just started getting the babies out as best we could."

Gmerek said he broke six ribs and had a partially collapsed lung from the crash.

"I thought about them all the time," Gmerek said of the children.

Kim Lan Duong said she was orphaned in the streets of Saigon before being flown to Detroit during Operation Babylift, where she was adopted and raised by her single mother and grandmother, Sandy and Violet Howard.

"To be able to see adult adoptees, it warms their hearts to see us grown up," said Duong, 43, who now lives in Dallas. "They still call us kids and that's OK."