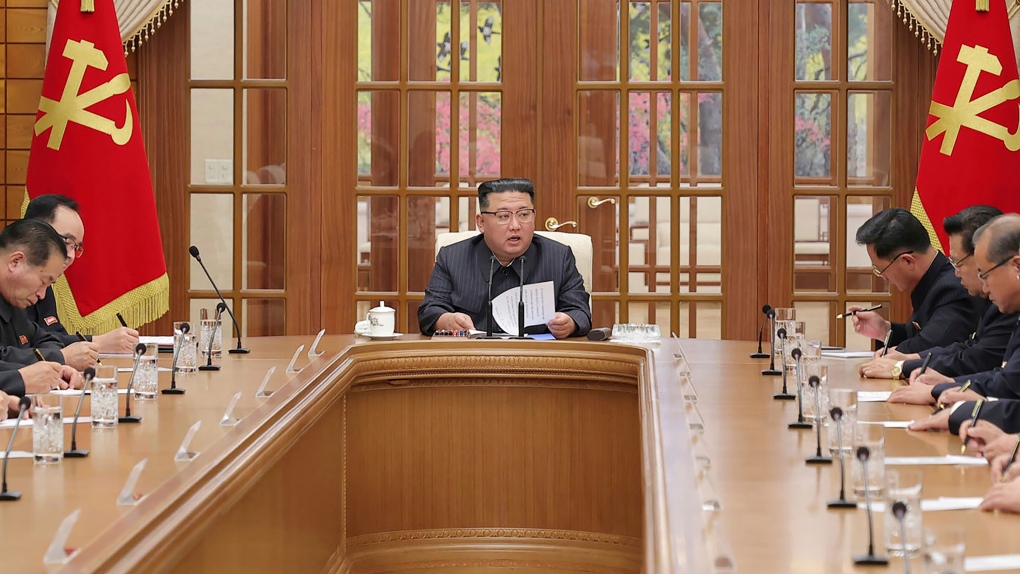 This photo provided on Dec. 1, 2022, by the North Korean government shows North Korean leader Kim Jong Un, centre, attends a meeting of the Central Committee of the ruling Workers' Party in Pyongyang, on Nov. 30, 2022. Independent journalists were not given access to cover the event depicted in this image distributed by the North Korean government. The content of this image is as provided and cannot be independently verified. (Korean Central News Agency/Korea News Service via AP)
WASHINGTON -

The Biden administration on Thursday imposed sanctions on three members of North Korea's ruling party's central committee for their involvement in the country's ballistic missile program.

The Treasury Department announced it was targeting the director and vice director of the Workers Party of Korea, Jon Il Ho and Yu Jin, respectively, along with another central committee member, Kim Su Gil, with asset freezes and bans on Americans conducting any type of business with them.

The sanctions came as North Korea has ramped up its ballistic missile testing to a record pace this year with more than 60 launches, dialing up pressure on Washington and Seoul.

The three officials "played major roles" in North Korea's development of weapons in violation of UN resolutions, the Treasury Department said in a statement, and "have personally attended numerous ballistic missile launches since at least 2017."

The trio were penalized by the European Union in April and had been previously covered under existing U.S. sanctions against the North's ruling party.

The dozens of tests have included multiple launches of ICBMs with a potential range to reach the U.S. mainland and an intermediate-range missile flown over Japan.

North Korea has also conducted a barrage of short-range launches it described as simulated nuclear attacks on South Korean and U.S. targets as it angrily reacted to the expansion of the allies' combined military exercises, which North Korea insists are rehearsals for a potential invasion.

North Korea has punctuated the tests with threats of nuclear conflict with Washington and Seoul that communicated an escalatory nuclear doctrine.

The North's rubber-stamp parliament in September passed a law that authorized preemptive nuclear attacks in a broad range of scenarios, including non-war situations, where the country may perceive its leadership as under threat.