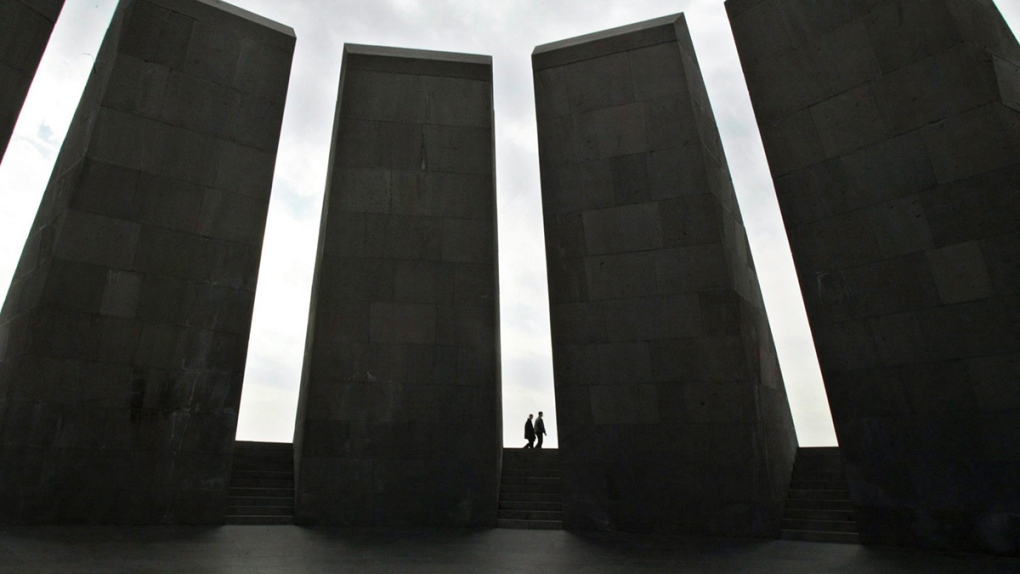 This March 2, 2005 file photo shows the memorial to the victims of the "Great Slaughter," where 1.5 million Armenians were massacred between 1915 and 1923 by the Ottoman Empire, in Yerevan, Armenia. (AP Photo/Misha Japaridze, File)

WASHINGTON, United States -- Armenia rejoiced but Turkey was furious on Wednesday after the U.S. House of Representatives passed a historic resolution recognizing mass killings of Armenians a century ago as genocide.

With tensions already high over Turkey's assault on Kurdish-controlled areas of northern Syria, US lawmakers voted 405 to 11 on Tuesday in support of the measure to "commemorate the Armenian Genocide through official recognition and remembrance."

The move was a first for the US Congress, where similar measures with such direct language have been introduced for decades but never passed.

The resolution says the killing of 1.5 million Armenians by the Ottoman Empire between 1915 and 1923 amounted to genocide, a claim recognized by some 30 countries.

Turkey strongly denies the accusation of genocide and says that both Armenians and Turks died as a result of the First World War. It puts the death toll in the hundreds of thousands.

Ankara was swift to condemn the US vote, summoning the American ambassador to Ankara and calling it a "meaningless political step".

"This step which was taken is worthless and we do not recognise it," Turkish President Recep Tayyip Erdogan said in a televised speech.

Ties between Washington and NATO member Turkey have been strained by Ankara's offensive against Kurdish fighters in northern Syria, which came after U.S. forces withdrew from the area.

The House also passed a measure on Tuesday imposing sanctions on senior Turkish officials involved in the Syria offensive.

The international recognition of the killings as genocide has long been the top priority of Armenia's foreign policy, supported by vigorous campaigning by Armenian diasporas around the world.

Armenian Prime Minister Nikol Pashinyan hailed the House move, tweeting that it was a "bold step towards serving truth and historical #justice that also offers comfort to millions of descendants of the Armenian Genocide survivors."

The Armenian foreign ministry said the resolution was of "profound significance" and thanked US lawmakers for "their overwhelming commitment to truth, justice, humanity and solidarity, and to universal values of human rights."

The sentiment was shared by Armenians on the streets of the capital Yerevan.

"I am so happy that the US has finally recognised the Armenian genocide," said 69-year-old cobbler Koryun Hakobyan.

The hilltop genocide memorial that dominates Yerevan's skyline draws hundreds of thousands on April 24 each year to mark the anniversary of the start of the tragedy.

In April 2015, on the centenary of the killings, the Armenian Church conferred sainthood on victims of the massacres.

Kim Kardashian, the U.S. reality star who is a prominent member of the Armenian diaspora and visited Yerevan for the 2015 anniversary, hailed the Washington vote on social media.

"WOW LOOK AT THESE INCREDIBLE NUMBERS!!! THE U.S. JUST RECOGNIZED THE ARMENIAN GENOCIDE!!!!" she wrote in a Tweet to her 62 million followers.

Turkey's foreign ministry suggested the House measure was the result of domestic politics in the United States, where there are between 500,000 and 1.5 million Americans of Armenian origin.

"Its sole addressees are the Armenian lobby and anti-Turkey groups," the ministry said.

In 2017, newly inaugurated U.S. President Donald Trump criticized the killings as "one of the worst mass atrocities of the 20th century," but in keeping with longstanding US practice he stopped short of using the word genocide.

Before being elected in 2008, Trump's predecessor Barack Obama had pledged to recognize the killings as genocide, but ultimately did not do so during his two terms in office.

House Speaker Nancy Pelosi said Tuesday that the truth of the "staggering crime" had been denied too often.

"Today, let us clearly state the facts on the floor of this House to be etched forever into the Congressional Record: The barbarism committed against the Armenian people was a genocide."