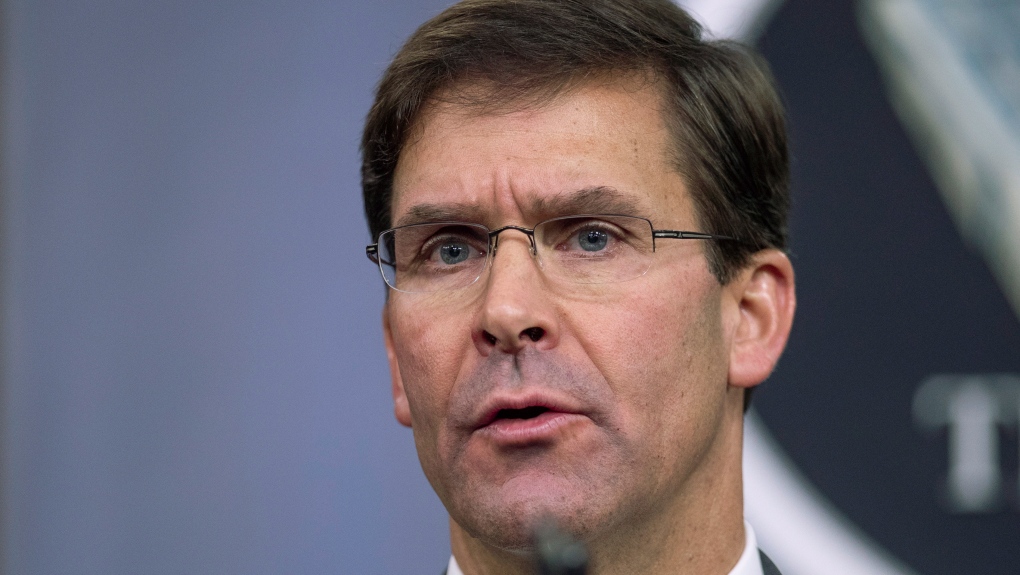 In this Aug. 28, 2019, file photo, Secretary of Defense Mark Esper speaks to reporters during a briefing at the Pentagon. Esper says the "impulsive" decision by Turkey to invade northern Syria will further destabilize a region already caught up in civil war. Esper says the invasion puts America's Syrian Kurdish partners "in harm's way," but insists the Kurds are not being abandoned. (AP Photo/Manuel Balce Ceneta, File)

WASHINGTON -- Turkey's invasion of Syria to attack U.S.-backed Kurdish forces was an "impulsive" move that will further destabilize the region, Pentagon officials said Friday, insisting that a separate American-led fight against the Islamic State in the area would continue despite the new conflict.

Defence Secretary Mark Esper told a Pentagon news conference that Washington is "greatly disappointed" by the Turkish incursion. He said it has badly damaged already frayed relations with Turkey, a NATO ally ousted from a Pentagon fighter program in July for refusing to drop its purchase of a Russian air defence system that is incompatible with NATO.

He spoke shortly before American forces came under Turkish artillery fire at a small outpost in northeastern Syria. No Americans were hurt, and the Turks insist the Americans were not targeted. But the strike shows how swiftly the conflict is descending into turmoil.

Esper insisted the Kurds remain a viable partner, although the U.S. has said it will not step between them and the Turks.

"To be clear, we are not abandoning our Kurdish partner forces, and U.S. troops remain with them in other parts of Syria. The impulsive action of President (Recep Tayyip) Erdogan to invade northern Syria has put the United States in a tough situation," Esper said.

The Turkish incursion has complicated U.S. military efforts in the region, even as Washington seeks to deter Iran from further attacks on Saudi Arabia following a drone and cruise missile assault in September that damaged key Saudi oil facilities. In response, the U.S. said it as deploying additional air defences to Saudi Arabia.

Many have called President Donald Trump's decision Sunday to pull a small number of U.S. troops away from the Turkish border a grave mistake. Even some of his staunchest Republican supporters have sharply criticized the decision, saying it opened the door for the Turkish invasion. Some regard Trump's move as a betrayal of the U.S.-armed Kurdish fighters who have, at great cost, partnered with U.S. forces against the Islamic State group since 2015.

At the White House, Treasury Secretary Steven Mnuchin put Turkey on notice that it could face "powerful sanctions" for its military incursion, and that the U.S. will "shut down the Turkish economy" if Ankara goes too far.

Mnuchin said the U.S. hopes it will not have to use new, expanded sanctions authority that Trump has authorized. The administration threatened sanctions against Turkey earlier this year for its purchase of the Russian S-400 air defence system, but never followed through.

The Turkish invasion also has raised the prospect of losing control of thousands of captured Islamic State fighters who are in detention facilities under the Kurds' control.

Esper called on the Turks to halt their offensive, but he told reporters that he has no indication they will. He lamented "the dramatic harm" done to the two nations' relationship.

Milley, chairman of the Joint Chiefs of Staff, said the Turkish military operations across the border into Syria are still "relatively limited."

He said the air and ground operations, including strikes by fighters and drones, have been carried out near two Syrian villages by about 1,000 members of the Turkish-backed Free Syrian Army and hundreds of Turkish commando forces. The distance they have penetrated into Syria ranges from a kilometre or two (about 1 mile) in one area to about 10 kilometres (6.2 miles) in another.

Milley emphasized that U.S. forces are still working with Kurdish forces. He said U.S. policy is to continue with a counter-IS campaign except in one area of the incursion, but the Kurds themselves said earlier this week that they suspended their counter-IS efforts.

Milley said leaders of the Kurdish force have told some of their fighters to move north to defend what they consider to be their territory. But he said the U.S. is "encouraging them to not overreact at this point and to try to tamp things down in order to allow some sort of diplomatic resolution.

Esper's remarks were the Pentagon's most explicit criticism of the Turkish operation, which began Wednesday as a campaign against the Syrian Kurd-led militia that has partnered with U.S. forces over the past five years to fight the Islamic State.

President Donald Trump has called the invasion a "bad idea" and held out the possibility of the U.S. mediating a settlement.

A senior Turkish official in Washington suggested that the U.S. mediation offer would not be welcomed in Ankara due to Turkey's opposition to negotiating with terrorists. The official, who was not authorized to discuss the matter publicly and spoke on condition of anonymity, said previous efforts to broker deals with the Kurds had failed because negotiating "will not change their basic motivation and will not change their tactics."

The official reiterated that Turkey would halt the operation and withdraw its forces only after the border area is cleared of the Kurdish fighters it considers "terrorists" but would not stay in Syria "one more day than is necessary."

The Pentagon had said before the operation began that the U.S. military would not support it, but it had not openly criticized the invasion. The U.S. pulled about 30 special operations troops out of observation posts along the invasion route on the Syrian border.

Turkey views elements of the U.S.-backed Syrian militia as terrorists and a border threat.

International aid agencies have warned of a humanitarian crisis, with nearly a half-million people at risk near the border.

In a written statement, the chief Pentagon spokesman, Jonathan Hoffman, said that in a phone call Thursday with his Turkish counterpart, Esper "made it clear" that the U.S. opposes the incursion.

Hoffman said Esper told Defence Minister Hulusi Akar that his government's military actions "place at risk" the progress made to defeat the extremists, and Esper urged Turkey to stop its incursion.

Milley spoke by phone Wednesday with his Turkish counterpart to discuss the security situation in Syria. Details were not released.