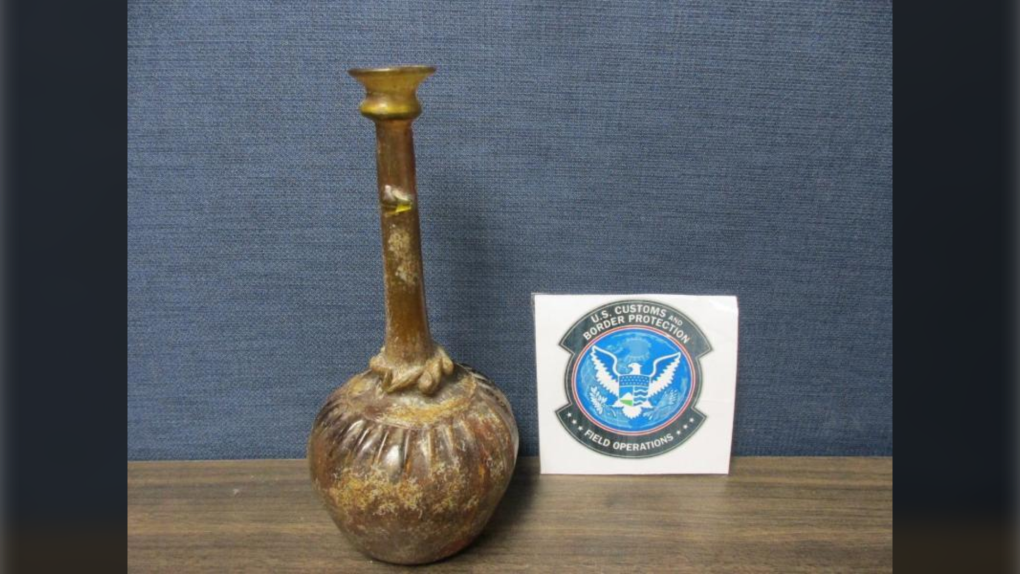 U.S. Customs and Border Protection cfficers in Louisville, Ky. seized an antique amber glass bottle in a shipment from the U.K. (CBP)

In a press release Friday, the agency said officers in Louisville, Ky. inspected a shipment containing an antique amber glass bottle on May 19.

The bottle was shipped from the U.K. and was purported to be from the 9th-10th century, according to CBP.

However, officers consulted a subject matter expert who concluded the bottle was actually from Iran and originated between the 11th and early 13th centuries.

CBP said officers seized the antique because the U.S. has prohibited the importation of goods or services from Iran.

According to the Office of Foreign Asset Control (OFAC), which is a department of the U.S. Treasury, goods or services of Iranian origin may not be imported into the U.S., either directly or through third countries.

The only exceptions to these rules are gifts valued at under US$100, information and informational materials, the household or personal effects of someone arrived to the U.S, and personal baggage.

The U.S. Treasury enforces economic and trade sanctions against countries and groups of individuals involved in “terrorism, narcotics and other disreputable activities,” the CBP said.

“Indiscriminate vendors are often willing to overlook international safeguards that preserve the importance of keeping antiquities within their rightful community,” assistant area port director Eugene Matho said in the release.

“Our officers are trained to recognize antiquities and ensure their safety and sanctity from illicit traders. CBP is proud to return this artifact and help restore the Iranian cultural heritage.”

The CBP said the OFAC will not typically allow merchandise in from Iran, Cuba, Burma (Myanmar), and most of Sudan.