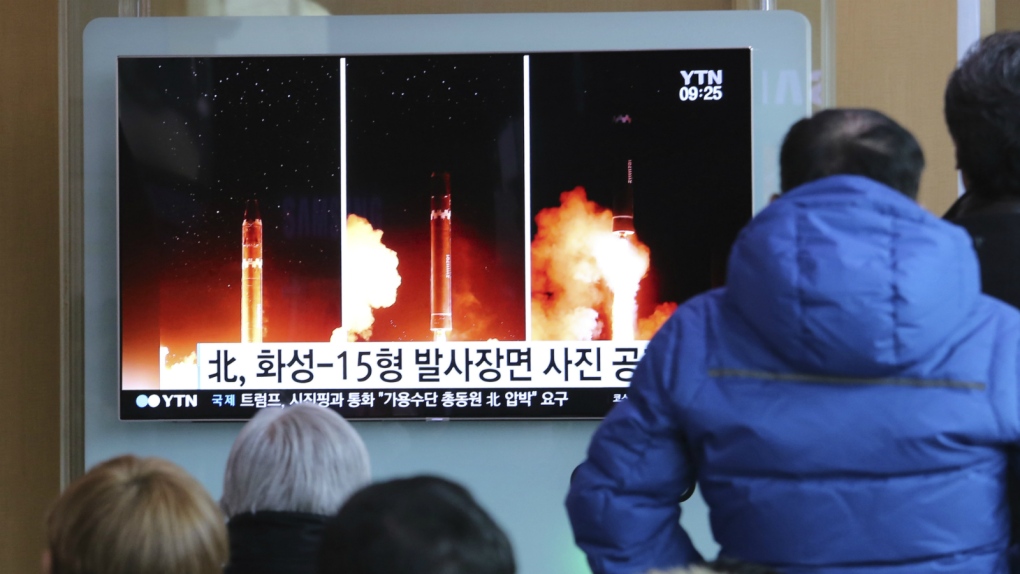 WASHINGTON - U.S. and Chinese generals engaged in an unusual set of security talks on Wednesday, just hours after North Korea's most powerful missile test yet, focused on how the mighty American and Chinese militaries might communicate in a crisis.

As President Donald Trump greeted the North's launching of another intercontinental ballistic missile with familiar demands for China to get tougher with its ally, the low-profile and unpublicized meeting at the National Defence University in Washington was taking place amid signs China is more willing at this time to discuss how the two world powers would manage an even worse emergency on the divided Korean Peninsula.

The Pentagon stressed the talks were scheduled long before North Korea's surprise missile launch in the early hours Wednesday in Asia. Officials insisted the dialogue wasn't centred on North Korea or anything else in particular.

Trump has vowed to prevent North Korea from having the capability to strike the U.S. mainland with a nuclear-tipped missile - using military force if necessary. He is running out of time: Some experts said the missile fired on a high trajectory that splashed down in the Sea of Japan showed North Korea's ability to strike Washington and the entire U.S. Eastern Seaboard.

The threat of a military confrontation is making China rethink its resistance to discussing contingencies involving North Korea, according to experts. Such discussions have long been off-limits for Beijing, which fought on North Korea's side against the United States in the 1950-53 Korean War and remains its treaty ally.

In a phone conversation with Trump on Wednesday, Chinese President Xi Jinping reiterated his desire for a diplomatic resolution to the standoff with North Korea.

"The engagement will serve as an opportunity to discuss how to manage crises, prevent miscalculations, and reduce the risk of misunderstanding," the office of Gen. Joseph Dunford, chairman of the Joint Chiefs of Staff, told The Associated Press in a statement.

The U.S. and China agreed on the talks when Dunford met with his Chinese counterpart in Beijing in August. While in China, Dunford observed a Chinese military drill at Shenyang, about 120 miles from the North Korean border - an unusual stop for an official visit.

Wednesday's talks were being led by Lt. Gen. Richard Clarke, the Joint Chiefs' planning director, and Maj. Gen. Shao Yuanming, a senior Chinese military official. They're especially noteworthy given the deep strategic mistrust between the U.S. and China, and Beijing's increasing challenge to America's post-World War II dominance in the Asia-Pacific.

China has been more explicit in saying what the talks are about.

Yao Yunzhu, a retired general who specializes in U.S.-Chinese defence relations at China's Academy of Military Science, said this summer they should include Northeast Asia, where North Korea is located. She also mentioned the Taiwan Strait and the South China Sea.

Yun Sun, an expert on Chinese foreign policy at the Stimson Center think-tank , said Dunford raised North Korean contingencies at the August meeting and the two sides discussed the potential danger of a conflict or a nuclear disaster. U.S. officials wouldn't confirm that account. Sun said she anticipated those talks would continue Wednesday.

While such discussions have occurred in recent years among non-government experts, they hadn't yet happened at official levels.

"Things are shifting right now in both China and the United States. There seems to be an opening," said Mastro. She expected the talks would still be at a preliminary stage.

"This type of discussion is difficult among friends. It's much more difficult between potential adversaries, but absolutely necessary," Mastro said. "The type of war that might break out (with North Korea) is one that would be more costly than anything that generations of Americans have experienced."

Political limitations exist on both sides, making some experts skeptical that progress would be made or even that North Korean contingencies would be addressed at all. The U.S. must be wary of offending South Korea, which isn't in the dialogue. China risks further alienating a paranoid ally at a time Beijing is supporting increasingly tough UN sanctions on North Korea's economy in response to its missile and nuclear tests.

"The Chinese side is very worried that if North Korea gets word it might turn them into a hostile neighbour," said Frank Aum, a former Pentagon adviser on North Korea.

Chinese opinions are divided. But in a sign of growing antipathy toward Pyongyang, some Chinese intellectuals have called for radical policy change. Not only is North Korea a liability for China's global standing, it also poses a nuclear risk on its doorstep.

A collapse of North Korea's state, or another crisis, could push Beijing into conflict with the U.S. and South Korea. Bonnie Glaser, an Asia expert at the Center for Strategic and International Studies, mentioned North Korean nuclear facilities within 50 miles of the Chinese border, and said both sides could try to secure loose nukes.

There have been grave miscommunications before. Abraham Denmark, a former senior U.S. military official for East Asia, cited the run-up to the Korean War, when Washington thought Beijing knew it would not seek to invade China; the Chinese thought the Americans knew that if U.S. forces advanced north of the 38th parallel into North Korea, China would intervene.

"Both sides at the time thought that they were being extremely clear, but neither side had any idea of what was going on," Denmark said. "That suggests to me that both sides need to be very up front with one another."

North Korea launches ICBM, may be longest-range test yet

What's new, and what's ahead, after North Korea's ICBM test

A look at this year's North Korean nuclear and missile tests