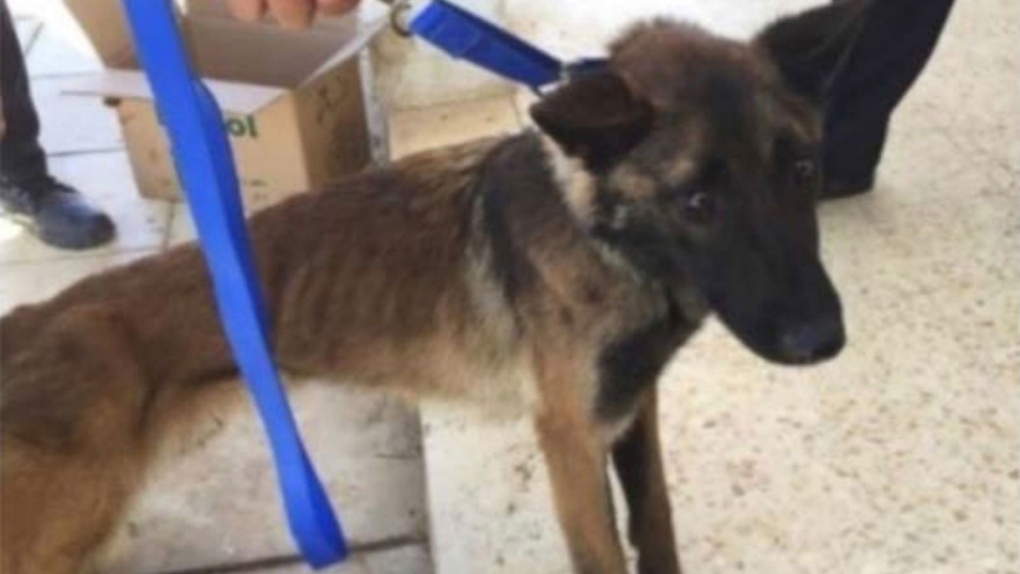 Bomb-sniffing dogs sent from the United States to its Middle Eastern ally Jordan are falling ill and dying due to poor treatment and negligence, a federal investigation has found.

A year-long evaluation by inspectors at the U.S. State Department found that at least 10 such dogs in Jordan died between 2008 and 2016 from medical problems. Even those who survive are suffering from "unhealthy conditions," such as inadequate kennels, poor sanitation, and overwork.

Photos in the report, published last week, show emaciated dogs with ribs protruding from their sides. Their nails are overgrown, and their ears are home to ticks so engorged they have likely been feasting on the dogs for days. In some facilities, there weren't any dog bowls -- the handlers fed the dogs by simply throwing food on the floor.

For more than 20 years, the U.S. has sent bomb-sniffing and specially trained dogs to partner nations under an anti terrorism assistance program. Despite spending "millions of dollars" training and dispatching the dogs, State Department officials failed to ensure their health and welfare, said the report, which was launched after a hotline complaint about the dogs' treatment.

According to the report, the State Department's loose regulation and lack of concrete policies were a big factor in the dogs' mistreatment. The State Department couldn't provide investigators detailed information for the dogs in other partner countries besides Jordan, and there often aren't any written agreements with the countries outlining how to care for the dogs.

This has led to persistent health problems in Jordan, the largest recipient in the program with 61 active bomb-sniffer dogs. Other countries with fewer dogs include Thailand, Morocco, Indonesia, Bahrain.

The first dog to die in Jordan was Zoe, a 2-year-old Belgian Malinois. She died from heat stroke in 2017 -- a "terrible death" that was due to improper care rather than an accident, the report said.

The case of 2-year-old Athena, who was severely emaciated and ultimately sent back to the U.S. to recover in 2018, offers a glimpse into the dogs' filthy living conditions -- photos show dirt and feces all over her kennel floor, and an empty water bowl.

Even more damning is that concerns were raised as early as April 2016, when U.S. canine training staff visited Jordan for a welfare check. The subsequent report noted the high death rate, lack of medical care, insufficient facilities, and that the dogs had "lost the will to work."

Despite the 2016 findings and recommendations, more dogs were subsequently sent to Jordan, and the program continued to be funded. Even when new measures were put in place, like the deployment of full-time mentors from the US to monitor the dogs in Jordan, the problems continued -- two such mentors had been there at the time of Athena's declining health, and they failed to either notice or intervene.

The report laid out five recommendations, including more frequent welfare checks and the creation of a written agreement with partner nations. The State Department fully agreed to four of the recommendations -- but did not agree to a suggestion to stop sending dogs to Jordan until there was a sustainability plan put in place.

Since the report's publication last week, U.S. officials have demanded long-overdue action -- Chuck Grassley, chairman of the Senate Committee on Finance, sent a letter to Secretary of State Mike Pompeo on Friday, requesting more information and a briefing on the issue.

"It is important for Congress to know whether the (program) is operating effectively and efficiently and whether animals involved in the program are being treated according to the humane and ethical standards that the American people undoubtedly expect," Grassley wrote.