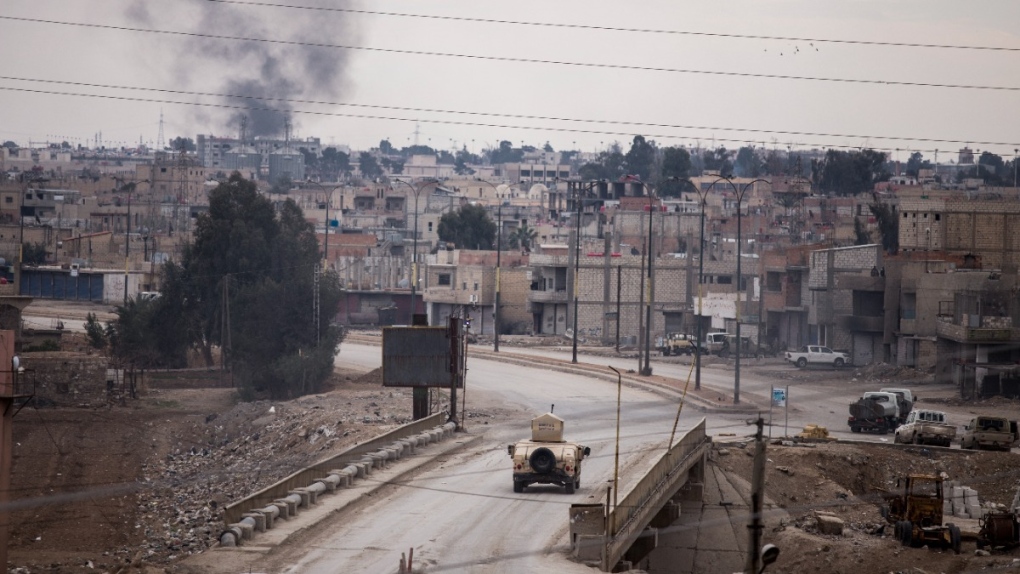 U.S.-backed Kurdish-led forces said they wrestled control of the last section of a prison controlled by Islamic State militants and freed a number of child detainees used as human shields. It ended a weeklong assault by the extremists on one of the largest detention facilities in Syria.

The attack was the biggest by ISIS since the fall of the group's "caliphate" in 2019 and came as the militants staged a number of deadly attacks in Syria and Iraq that stoked fears they may be staging a comeback.

In the week of clashes, dozens from both sides have been killed, the U.S.-led coalition has carried out nearly a dozen airstrikes and thousands of civilians living nearby have been displaced.

"The whole prison is now under control," said Farhad Shami, a spokesman for the U.S.-backed Syrian Democratic Forces. "The operation today was on the cells where child detainees were held. We were able to surround a number of terrorists who had taken them as shields and we killed them."

Shami said the force was then able to enter the cells and the remaining militants surrendered. A large number of children were freed, he said, but he had no specific number.

Shami said about 3,000 inmates have surrendered.

The militants had used child detainees as human shields slowing down the effort to retake the facility located in the northeastern city of Hassakeh, Kurdish officials said.

After breaking into the prison late Thursday, IS militants were joined by others rioting inside the facility. Around 200 armed militants were believed to be holed up in the northern wing at one end of the prison complex, holding hostages from among the prison staff.

The Syria prison complex, known as al-Sinaa or Gweiran prison, houses more than 3,000 inmates, including around 600 minors. Children have reportedly been killed and wounded in clashes, rights and aid groups say.

The Britain-based Syrian Observatory for Human Rights said 124 ISIS militants, 50 fighters with the Kurdish-led forces and seven civilians were killed in the weeklong attack that extended outside the walls of the prison into residential areas. Thousands of civilians have been displaced.

The assault began Thursday just hours before another brazen attack on military troops in neighboring Iraq. Together, they signaled a new spike in violence by emboldened militants who had for months been carrying out low-level assaults, largely on security patrols, checkpoints and other mobile targets.

Eleven Iraqi soldiers were killed in their sleep after gunmen attacked an army barracks in Diyala province on Friday. It was the deadliest attack in months to target Iraq's military and was blamed on IS, which appeared to be exploiting a security vacuum in Iraq's north. The vacuum is perpetuated by territorial disputes between the federal government and the semi-autonomous Kurdish region.

The Kurdish-led Syrian Democratic Forces said earlier Wednesday it had freed 23 of its servicemen held hostage by IS militants. Later it said inmates continued to surrender.

The SDF, backed by U.S.-led coalition Bradley Fighting Vehicles and air support, had been closing in on the prison wing controlled by the armed militants. Fighters from the SDF and other security teams took control of adjacent buildings and used loudspeakers to call on the militants to surrender.

The Islamic State group's territorial control in Iraq and Syria was crushed by a years-long U.S.-backed campaign, but some fighters remained at large in sleeper cells that have increasingly killed scores of Iraqis and Syrians in past months. Prison riots have been common, where thousands of suspected IS militants have been held. But the attack launched late Thursday was the boldest and most ambitious.

Sleeper cells from outside the prison, nearly 100, attacked the facility after dark, ramming vehicles against its walls and detonating car bombs to create a diversion. They were joined by rioting inmates, and some managed to escape.

The SDF said the total number of fugitives remained unclear.

A recording obtained from inside the prison by a teenaged detainee described a violent onslaught that has left multiple children dead and many wounded inside the facility. Shami said at one point the IS militants had seized control of the hospital inside the prison. The teenage boy who was injured in the head said medical assistance was not available.

On Wednesday, Iraq's prime minister made a rare visit to the country's border with Syria in a show of support to troops and said Iraqi forces were capable of resisting the Islamic State group.

Mustafa al-Kadhimi was in Ninevah province to inspect security measures.

"You must intensify your efforts and work around the clock," he said, addressing border officials and security forces, according to a statement from his office. "This area is very important for us and the enemy as well, and this requires redoubling efforts."

Al-Kadhimi said he was confident Iraqi security forces would be able to thwart IS. "You are stronger today than you were yesterday," he told them. IS overran vast swathes of northern Iraq in the summer of 2014 largely because Iraqi forces retreated.

Al-Kadhmi was accompanied by the ministers of defense and the interior. Iraq shares a 599-kilometer (372-mile) border with Syria.

"I say to the terrorists of Daesh: Do not test us, you have tried a lot and failed. You will try a lot and you will fail," he said, referring to IS by its Arabic acronym.