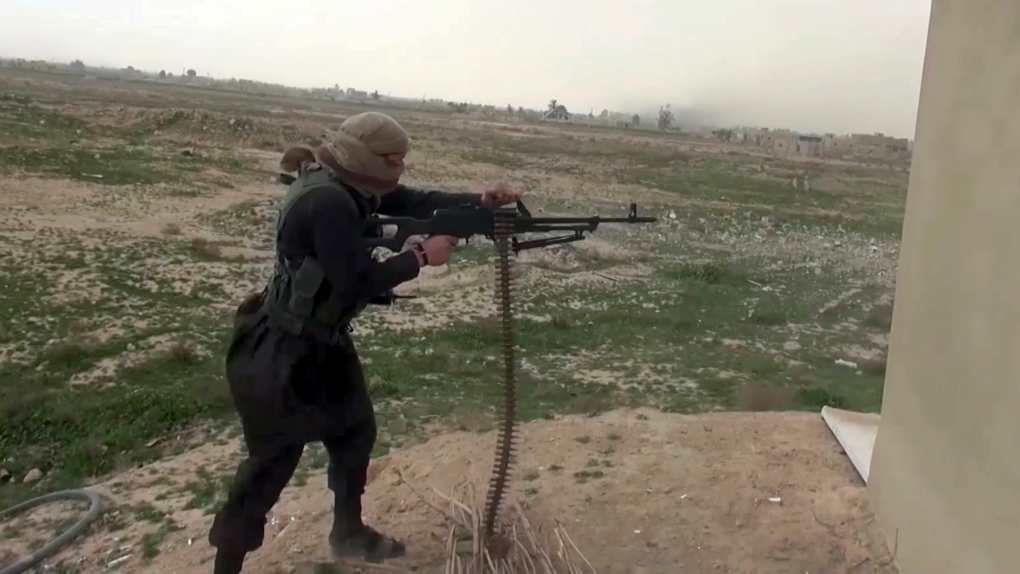 This frame grab from video posted online Friday, Jan. 18, 2019, by supporters of the Islamic State group, purports to show an ISIS fighter firing a weapon during clashes with members of the U.S.-backed Syrian Democratic Forces, in the eastern Syrian province of Deir el-Zour, Syria. (Militant Photo via AP)

BEIRUT -- U.S.-backed and Kurdish-led Syrian forces said Saturday they have launched a final push to defeat the Islamic State group in the last tiny pocket the extremists hold in eastern Syria.

Syrian Democratic Forces spokesman Mustafa Bali tweeted that the offensive began Saturday after more than 20,000 civilians were evacuated from the ISIS-held area in the eastern province of Deir el-Zour. An SDF statement said the offensive was focused on the village of Baghouz.

The SDF, backed by U.S. air power, has driven ISIS from large swaths of territory it once controlled in northern and eastern Syria, confining the extremists to a small pocket of land near the border with Iraq.

Scores of ISIS fighters are now besieged in two villages, or less than once per cent of the self-styled caliphate that once sprawled across large parts of Syria and Iraq. In recent weeks, thousands of civilians, including families of ISIS fighters, left the area controlled by the extremists.

"The decisive battle began tonight to finish what remains of Daesh terrorists," Bali said, using an Arabic acronym to refer to IS.

"The battle is very fierce," he later told The Associated Press. "Those remaining inside are the most experienced who are defending their last stronghold. According to this you can imagine the ferocity and size of the fighting."

Bali did not say how long they expect the battle to last.

U.S. President Donald Trump predicted Wednesday that ISIS will have lost all of its territory by next week.

"It should be formally announced sometime, probably next week, that we will have 100 per cent of the caliphate," Trump told representatives of the 79-member, U.S.-led coalition fighting ISIS.

U.S. officials have said in recent weeks that IS has lost 99.5 per cent of its territory and is holding onto fewer than 5 square kilometres in Syria, or less than 2 square miles, where the bulk of the fighters are concentrated. But activists and residents say IS still has sleeper cells in Syria and Iraq, and is laying the groundwork for an insurgency. The U.S. military has warned the group could stage a comeback if the military and counterterrorism pressure on it is eased.

The Observatory said that since the SDF began its offensive against ISIS in the area on Sept. 10, some 1,279 IS gunmen and 678 SDF fighters have been killed. It said 401 civilians, including 144 children and teenagers, have been killed since then.

Other activist collectives, including the Step news agency, reported the attack, saying some of the attackers used motorcycles rigged with explosives.

The fighting was concentrated near al-Omar field, Syria's largest.