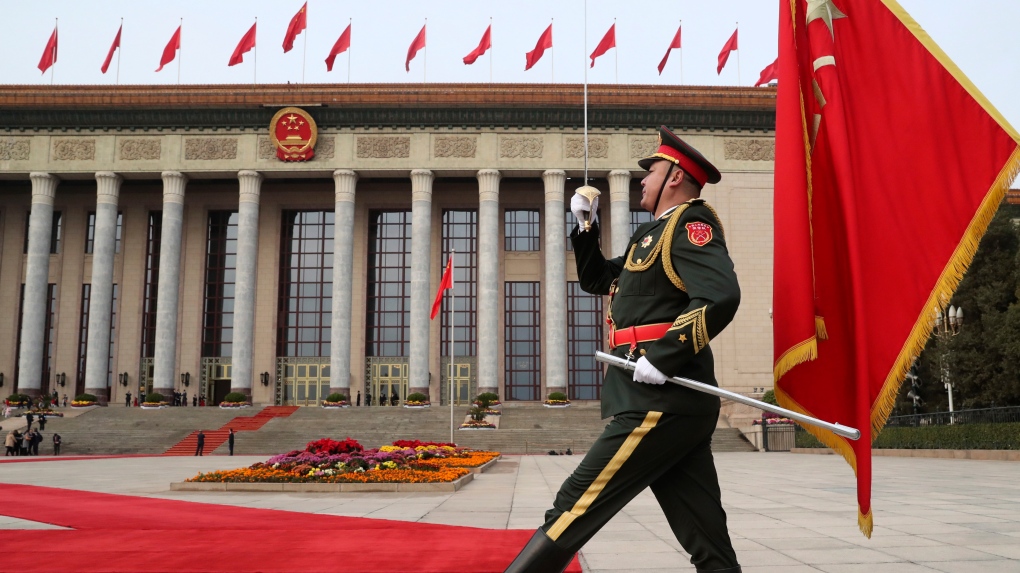 In this Nov. 9, 2017, file photo, a member of the Chinese military marches at the Great Hall of the People, in Beijing, China. (AP Photo/Andrew Harnik, File)

WASHINGTON -- Amid increasing tensions with Beijing, the Pentagon has released a new report that lays out U.S. concerns about China's growing military might, underscoring worries about a possible attack against Taiwan.

Speaking to reporters, a senior defence intelligence official said Tuesday that the key concern is that as China upgrades its military equipment and technology and reforms how it trains and develops troops, it becomes more confident in its ability to wage a regional conflict. And Beijing's leaders have made it clear that reasserting sovereignty over Taiwan is a top priority.

The official added, however, that although China could easily fire missiles at Taiwan, it doesn't yet have the military capability to successfully invade the self-governing island, which split from mainland China amid civil war in 1949. The official spoke on condition of anonymity in order to provide more detail on intelligence findings in the report, which was written by the Defence Intelligence Agency.

A Chinese government spokeswoman said the report "is full of Cold War ideology and zero-sum game thinking" and suggested the U.S. was making excuses to strengthen or develop its own weapons of mass destruction.

"We use rules rather than weapons to safeguard and promote our own interests," foreign ministry spokeswoman Hua Chunying said at a daily news briefing in Beijing on Wednesday.

The report's release Tuesday comes just a week after Chinese President Xi Jinping called on his People's Liberation Army to better prepare for combat. China has warned the U.S. against further upgrading military ties with Taiwan and has threatened to use force against the island to assert its claim of sovereignty. Under President Donald Trump, the U.S. has taken incremental moves to bolster ties with the island, including renewed arms sales and upgraded contacts between officials.

U.S.-China tensions have become increasingly frayed on the military and economic fronts over the past year. Trump imposed tariff increases of up to 25 per cent on $250 billion of Chinese imports over complaints Beijing steals or pressures companies to hand over technology. Xi responded by imposing penalties on $110 billion of American goods.

The ongoing rise of China, in fact, has triggered greater U.S. military attention on the Indo-Pacific region over the last several years. And last year's release of the U.S. National Defence Strategy emphasized the importance of great power competition with Russia and China. And it asserted that China's rapidly expanding military and Russia's increasing aggression are threatening America's military advantage around the world.

Just after taking over as the acting defence secretary, Pat Shanahan told his military service leaders on Jan. 2 that their focus should be "China, China, China."

The DIA report talks broadly about the steps China is taking to modernize its military and expand its operations around the globe. The worry, said the defence intelligence official, is that China will reach the point where leaders will decide that using military force for a regional conflict such as Taiwan is more imminent.

"Beijing's longstanding interest to eventually compel Taiwan's reunification with the mainland and deter any attempt by Taiwan to declare independence has served as the primary driver for China's military modernization," the report says. "Beijing's anticipation that foreign forces would intervene in a Taiwan scenario led the PLA to develop a range of systems to deter and deny foreign regional force projection."

Over time, the report said, the PLA is "likely to grow even more technologically advanced, with equipment comparable to that of other modern militaries." That would include advanced fighter aircraft, ships, missile systems and space and cyberspace capabilities.

Cyberthreats from China have long been a major U.S. concern, stretching from massive data breaches and the theft of trade secrets to Beijing's campaign to improve its ability to conduct cyberattacks. The U.S. official said China has been working very hard on developing ways to combine cyberattack capabilities with other kinetic weapons that can be used in combat.

Still, the official said Beijing will face a significant challenge as it tries to bring generational change to its military.

Until now, China has mainly done tightly controlled regional operations and some counterpiracy missions. It will be more difficult, the official said, to create a joint force capable of conducting large, complex combat operations far abroad.