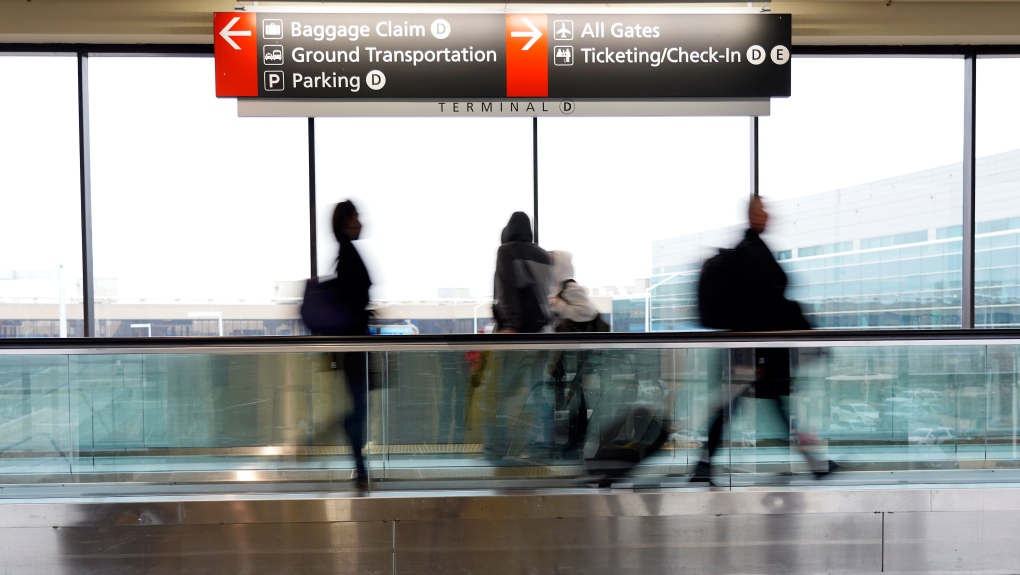 Travelers walk to their gates at the Philadelphia International Airport on Friday, Dec. 31, 2021, in Philadelphia. (AP Photo/Michael Perez)
CHICAGO -

U.S. carriers on Friday canceled thousands of flights through the weekend in anticipation of a winter storm forecast to bring high winds and heavy snow across the Northeast and Mid-Atlantic.

The National Weather Service said in an advisory that the Nor'easter would result in dangerous blizzards and make travel "nearly impossible." Flight-tracking service FlightAware reported about 4,900 U.S. flights were canceled between Friday and Sunday.

The Atlanta-based carrier canceled 1,290 flights from Friday to Sunday. Customers who would have traveled then were allowed to reschedule to different flights without extra cost.

"Delta teams are focused on a safe and orderly restart of operations at these airports and others in the Northeast Sunday afternoon, depending on conditions," the company said in a statement.

Similarly, American Airlines canceled about 1,160 flights as it expects "significant" impact from the storm on its Northeast operations, especially at Logan airport. Affected passengers can rebook flights without change fees.

New York-based JetBlue canceled about 500 flights through Sunday including half of its scheduled flights on Saturday.

United Airlines has cut 21% of its Saturday flights, according to FlightAware.

The storm has added to the challenges facing the airline industry, which is trying to recover from turbulence caused by the Omicron coronavirus variant. An increase in COVID-19 infections among employees has left carriers short staffed, forcing them to cancel flights.

Southwest Airlines Co on Thursday said about 5,000 employees, or roughly 10% of its workforce, had contracted the virus in the first three weeks of January. The company has canceled more than 5,600 flights thus far this month, which is estimated to cost it $50 million in revenue.

A driver who struck and killed a woman and her three young daughters in Brampton, Ont., nearly two years ago is set to be sentenced today.

In Montreal, a pioneering clinic in the emerging field of psychedelic-assisted psychotherapy is about to become the first health-care facility in Quebec to legally treat depression with psilocybin.

The moon glowed red on Sunday night and the early hours of Monday, after a total lunar eclipse that saw the sun, Earth and moon form a straight line in the night sky.

The European Union's efforts to impose a new round of sanctions against Russia over the war in Ukraine appeared to be bogged down on Monday, as a small group of countries opposed a ban on imports of Russian oil.

Most of Shanghai has stopped the spread of the coronavirus in the community and fewer than 1 million people remain under strict lockdown, authorities said Monday, as the city moves toward reopening and economic data showed the gloomy impact of China's 'zero-COVID' policy.

A man opened fire during a lunch reception at a Southern California church, killing one person and wounding five senior citizens before a pastor hit the gunman on the head with a chair and parishioners hog-tied him with electrical cords.