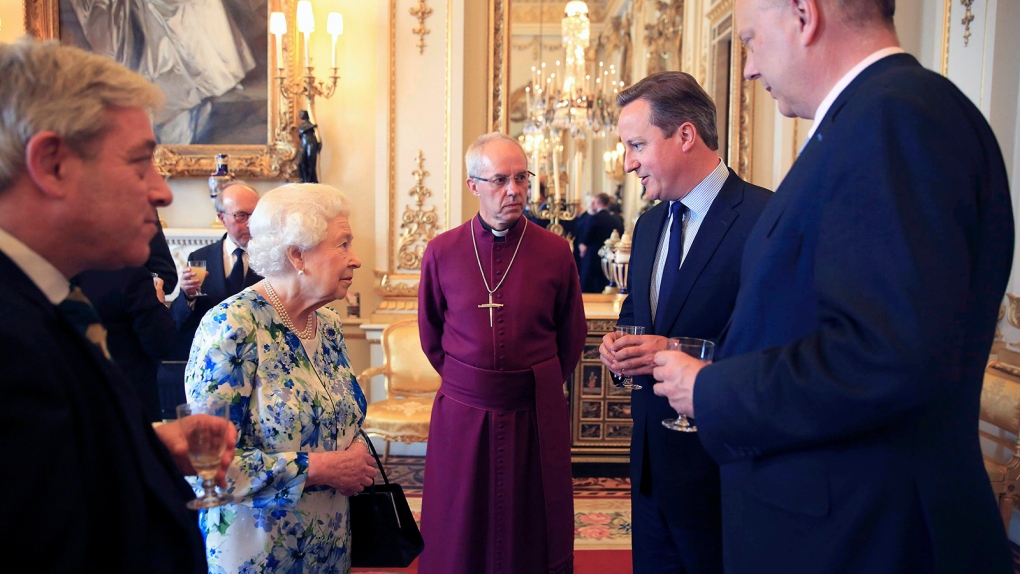 Britain's Queen Elizabeth, second left, speaks with Prime Minister David Cameron, second right, as leader of the House of Commons Chris Grayling, right, and Archbishop of Canterbury Justin Welby, center, watch during a reception in Buckingham Palace to mark the The Queen's 90th birthday, in London, Tuesday, May 10, 2016. (Paul Hackett/Pool Photo via AP)

LONDON -- British Prime Minister David Cameron was caught on microphone Tuesday saying that leaders of "fantastically corrupt" countries including Nigeria and Afghanistan will attend an anti-corruption summit in London this week.

Cameron will bring together politicians, officials, businesspeople and civil-society groups from around the world Thursday as part of efforts to clamp down on bribery, money-laundering and other forms of wrongdoing.

At a Buckingham Palace reception with Queen Elizabeth II, a television microphone caught Cameron saying "we have got some leaders of some fantastically corrupt countries coming to Britain."

He referred to "Nigeria and Afghanistan -- possibly two of the most corrupt countries in the world."

Nigerian President Muhammadu Buhari and Afghan President Ashraf Ghani -- both elected in 2014 -- have promised to curb corruption in their countries.

Both are due to attend Thursday's meeting, which hopes to produce a global declaration against corruption and break what Cameron has called the "taboo about tackling this issue head-on."

Cameron's 10 Downing St. office said Cameron knew there were "multiple cameras in the room" when he spoke.

A spokesman said that Buhari and Ghani "have been invited to the summit because they are driving the fight against corruption in their countries. The U.K. stands shoulder to shoulder with them as they do so."