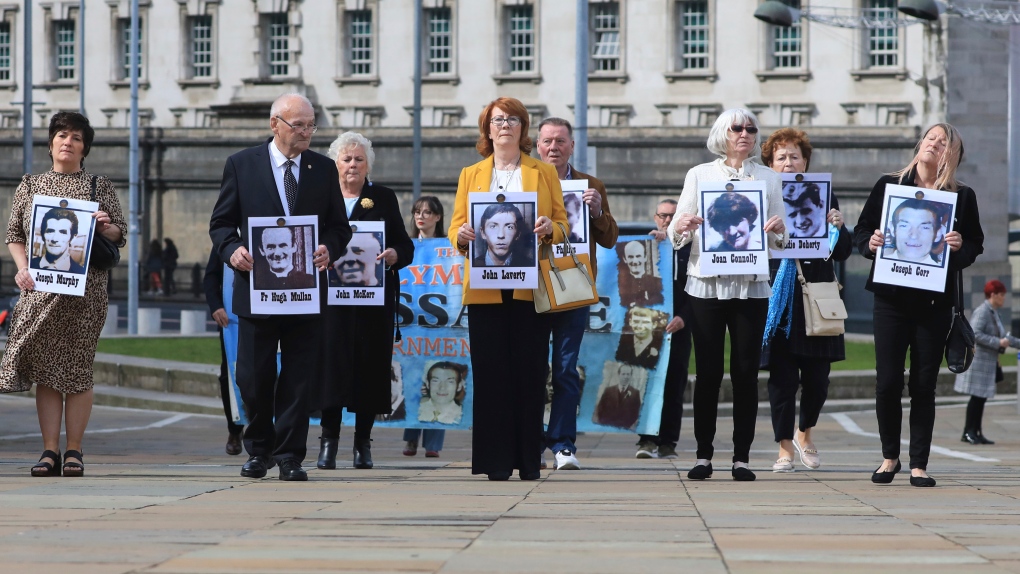 Family members arrive for the inquest into the Ballymurphy shooting, in Belfast, Northern Ireland, Tuesday May 11, 2021. (AP Photo/Peter Morrison)

LONDON -- U.K. Prime Minister Boris Johnson on Wednesday apologized "unreservedly" on behalf of the British government for the deaths of 10 innocent people killed in a 1971 incident in Belfast during a British Army operation.

A judge-led inquiry on Tuesday found that British soldiers unjustifiably shot or used disproportionate force in the deaths of nine of the 10 people killed in the incident, which sparked an upsurge of sectarian violence during the "Troubles" in Northern Ireland, a British province.

"The Prime Minister apologized unreservedly on behalf of the U.K. Government for the events that took place in Ballymurphy and the huge anguish that the lengthy pursuit of truth has caused the families of those killed," a spokesman for Johnson said following a call between the prime minister and Northern Ireland's First and Deputy First Ministers.

The deaths over a three-day period of disorder in the Ballymurphy area of Belfast - a sprawling housing estate of Catholics who opposed British rule - occurred in the days after the introduction of internment without trial for suspected militants triggered disorder on the streets.

Father Hugh Mullan, an 38-year-old priest who was among the 10 who died, was helping an injured man and waving a white object before he was shot twice in the back, the inquiry found.

There was insufficient evidence to say whether the army was responsible for the death of one of the victims, John James McKerr.

However Judge Siobhan Keegan, who oversaw the inquiry, said it was "shocking" that the state did not carry out a proper investigation into the deaths.

No one has been charged or convicted in connection with any of the deaths. The inquest was a fact-finding exercise and not a criminal trial.

The government plans to "deliver a way forward in Northern Ireland that focuses on reconciliation, delivers for victims of the Troubles and ends the cycle of reinvestigations," Johnson was quoted by the spokesman as saying.

Johnson had said on Tuesday his government would introduce legislation to give greater legal protection to former soldiers who served in Northern Ireland, plans that the Irish Republic and many in Belfast fiercely oppose.

Some 3,600 people were killed in the sectarian conflict between Irish Catholic nationalist militants, pro-British Protestant "loyalist" paramilitaries and the British military that largely ended after a 1998 peace agreement.