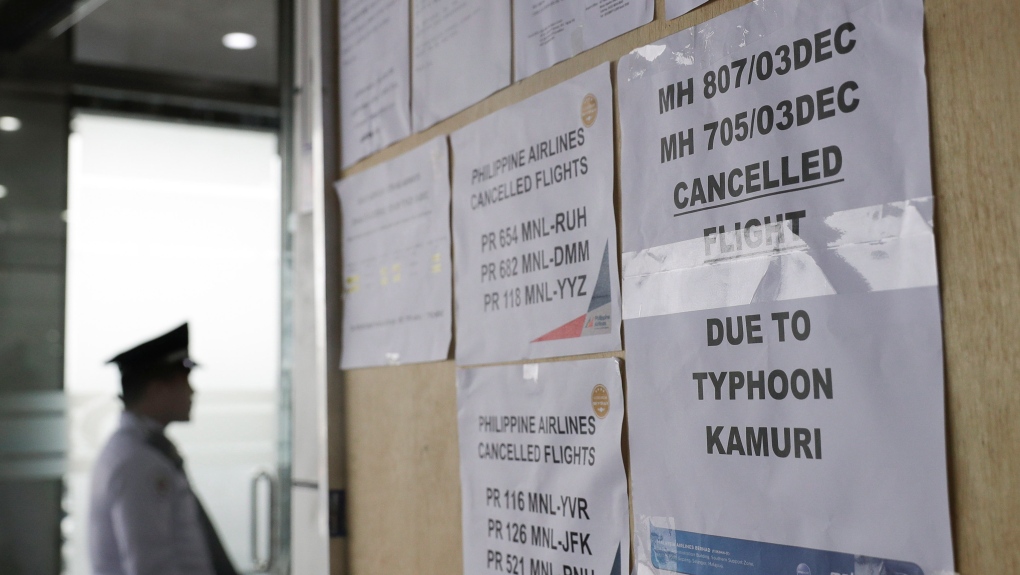 A sign is placed just outside the entrance of Manila's International Airport after flights were cancelled due to approaching Typhoon Kammuri on Tuesday, Dec. 3, 2019 in Manila, Philippines. (AP Photo/Aaron Favila)

A powerful typhoon that struck the Philippines late Monday has prompted authorities to close the country's largest airport due to powerful winds and heavy rains.

Typhoon Kammuri, known locally as Tisoy, made landfall on the southeastern part of Luzon, the Philippines' most populous island. It hit as the equivalent of a Category 4 Atlantic Hurricane, packing maximum sustained winds of nearly 215 kilometres per hour (130 miles per hour). Thousands had evacuated ahead of time.

More than 100 flights were cancelled after authorities in Manila decided to close the capital's Ninoy Aquino International Airport for 12 hours on Tuesday from 11 a.m. to 11 p.m. local time in anticipation of severe weather brought by the storm, according to CNN Philippines.

Kammuri has maintained its structure after making landfall -- when storms often weaken -- meaning it is likely to remain an intense and dangerous typhoon for some time, despite a small reduction in the maximum sustained winds.

Schools throughout the region were closed for a second day in a row and a handful of power lines were downed, CNN Philippines reported.

The 2019 Southeast Asian Games, a biennial athletic competition, saw several events rescheduled due to the storm. Philippine authorities said they had a "contingency plan" for bad weather and would not need to extend the competition, which is set to end December 11.

Kammuri is expected to travel through the centre of the Philippine archipelago Tuesday, reaching 139 miles (224.1 km) south of the capital, Manila, in the early afternoon and bringing heavy rains and winds of up to 100 kph (62 mph) to the city.

The storm will then continue across Luzon and is forecast to veer south into the South China Sea on Wednesday morning.