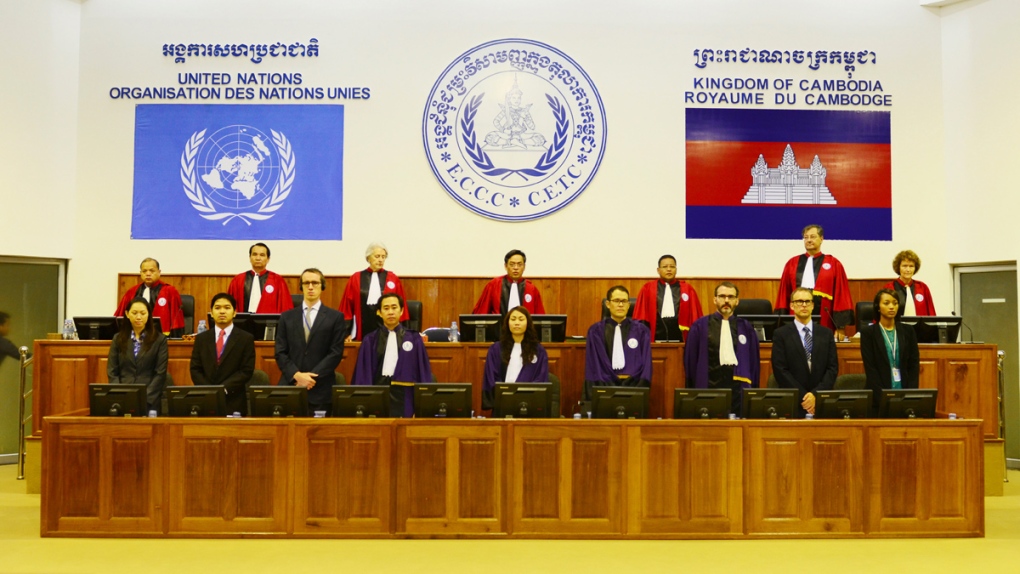 PHNOM PENH, Cambodia -- They were leaders of Cambodia's infamous Khmer Rouge, the fanatical communist movement behind a 1970s reign of terror that transformed this entire Southeast Asian nation into a ruthless slave state -- a place where cities were emptied of their inhabitants, religion and schools were banned, and anyone deemed a threat was executed.

When the nightmare ended, in 1979, close to 2 million people were dead -- a quarter of Cambodia's population at the time.

On Thursday, a UN-backed tribunal convicted two of the once all-powerful men who ruled during that era of crimes against humanity in the first and possibly the last verdicts to be issued against the group's aging, top members.

Although survivors welcomed the decision to impose life sentences against Khieu Samphan, an 83-year-old former head of state, and Nuon Chea, the movement's 88-year-old chief ideologue, they also say justice has come far too late and is simply not adequate.

"Nothing can compare to the immense suffering they imposed, no sentence can be enough. They belong in hell, not an air-conditioned jail cell," said Youk Chhang, who heads The Documentation Center of Cambodia, which has collected more than a million documents related to the Khmer Rouge terror.

"But this gives us hope that we can learn from the past ... that we can try to prevent this from ever happening again."

There was no visible reaction from either of the accused when the decisions were announced. Nuon Chea, wearing dark sunglasses, was too weak even to stand from his wheelchair. Defence lawyers insisted the case was not over and vowed to appeal within 30 days.

Summarizing the verdict, chief judge Nil Nonn said the defendants were part of "a joint criminal enterprise" that launched "a widespread and systematic attack against the civilian population" after Khmer Rouge guerrillas seized Phnom Penh on April 17, 1975.

The case, which lasted about two years, focused on just one of many mass killing sites and the forced exodus of millions of people from Cambodia's cities and towns, where even hospitals were emptied of patients.

Top Khmer Rouge leader Pol Pot had reset the clock to "Year Zero." Society was to be "purified." Money was abolished. Communal kitchens were introduced nationwide. The failed aim: to create an agrarian "utopia."

Most of those who died succumbed to starvation, medical neglect and overwork. Marked for death were the educated, religious or ethnic minorities, Buddhist monks, and anyone suspected of ties with the former government or who questioned the new rulers.

Khieu Samphan acknowledged mass killings took place. But during the trial he claimed he was just a figurehead with no real authority. He called allegations that he ordered executions a "fairy tale."

Nuon Chea, known as Brother No. 2 because he was Pol Pot's trusted deputy, also denied responsibility, saying that Vietnamese forces -- not the Khmer Rouge -- had killed Cambodians en masse.

The hybrid tribunal, comprised of Cambodian and international jurists, began operations in 2006. It has been heavily criticized for spending too much -- more than $200 million so far -- and doing too little.

The court has convicted only one other defendant -- prison director Kaing Guek Eav, who was sentenced to life imprisonment in 2011.

The current trial began in 2011 with four senior Khmer Rouge leaders; only two remain. Former Foreign Minister Ieng Sary died in 2013, while his wife, Social Affairs Minister Ieng Thirith, was deemed unfit to stand trial due to dementia in 2012.

Chea Leang, a co-prosecutor, said Thursday's judgment "will not turn back time, it won't give back life to those who were executed, or those who died of heat and exhaustion or lack of food or water or medical assistance.

"Yet I believe it will give some justice .... denied to them for so long," she said.

Survivors of the regime travelled from across the country to witness the historic day, filling several hundred seats available to the public at the tribunal. After the verdict was read, several former prisoners wept and hugged. Many said they felt mixed reactions.

"The crimes are huge, and just sentencing them to life in jail is not fair," said 54-year-old Chea Sophon, who spent years in hard labour camps building dams and working in rice fields. His brother was killed during the Khmer Rouge era.

"But what can I do?" he said, adding, "Even if they die many times over, it would not be enough."

Another survivor, 58-year-old Khuth Vouern, said she felt a sense of relief that justice was finally served, even if it came generations late.

"I have been waiting for this day for many years," said the woman, whose husband and several other family members were killed during the Khmer Rouge's rule. "Now, for the first time, my mind feels at least some degree of peace."

Both Khieu Samphan and Nuon Chea will be tried by the same tribunal later this year again on separate charges of genocide. Because of the advanced age and poor health of the defendants, the case against them was divided into separate trials in an effort to render justice before they die.

Amnesty International called Thursday's verdict "a crucial step." But it also noted several "troubling" obstacles the tribunal has faced along the way -- including the refusal of senior Cambodian government officials to give evidence and allegations of political interference.

It called for the remaining cases to be completed "in a timely and fair manner without political interference."

Investigators are looking into issuing indictments against mid-level Khmer Rouge officials -- something the government has opposed.

Authoritarian Prime Minister Hun Sen's government is full of former Khmer Rouge higher-ups -- himself included -- and has little to gain from the trials.