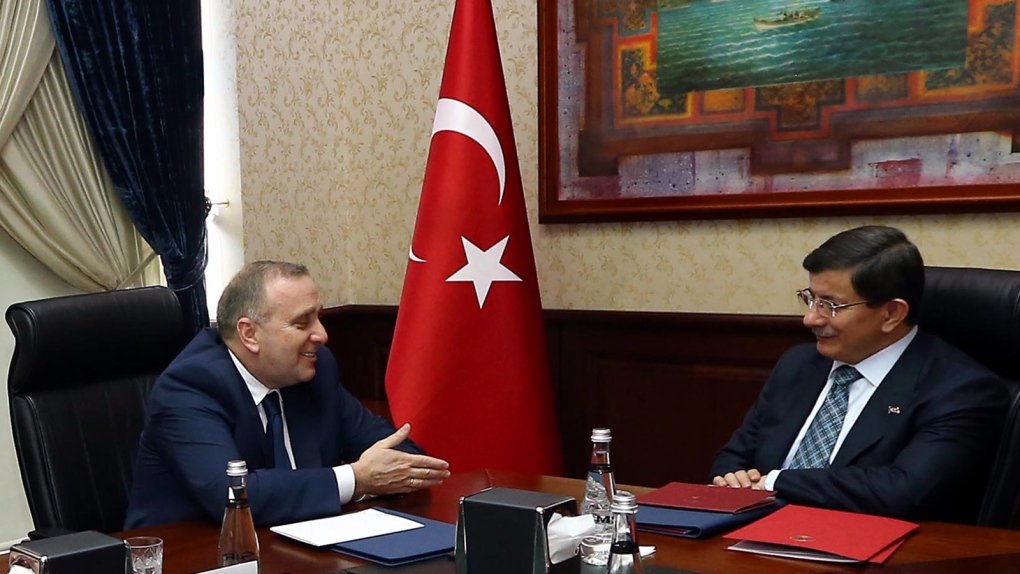 ANKARA, Turkey -- Turkish Prime Minister Ahmet Davutoglu on Monday extended condolences to the descendants of Armenians killed 100 years ago by Ottoman Turks, saying Turkey shared their pain and also announced that a service would be held at the Armenian Patriarchate in Istanbul to commemorate the victims.

In his conciliatory message released days ahead of the April 24 centenary commemorations, Davutoglu however, stopped short of the calling the killings a genocide and criticized efforts to press Turkey to recognize the slaughter as such.

"To reduce everything to a single word, to load all of the responsibility on the Turkish nation ... and to combine this with a discourse of hatred is legally and morally problematic," Davutoglu said.

Armenians have been campaigning for greater recognition that the slaughter constituted genocide in the run-up to the centenary while Turkey has fiercely lobbied to prevent countries from officially recognizing the massacres as genocide.

Turkey is concerned that U.S. President Barack Obama -- who has avoided using the term given the importance Washington place on Turkey as an ally -- may refer to the deaths as genocide on April 24.

Historians estimate that up to 1.5 million Armenians were killed by Ottoman Turks around the time of World War I, an event widely viewed by scholars as the first genocide of the 20th century. Turkey however, denies that the deaths constituted genocide, saying the toll has been inflated, and that those killed were victims of civil war and unrest.

"We once again respectfully remember Ottoman Armenians who lost their lives during the deportation of 1915 and share the pain of their children and grandchildren," Davutoglu said in his message.

The Armenian National Committee of America immediately rejected Davutoglu's message as a "fake apology" and called on Obama to formally recognize the killings as genocide.

"Prime Minister Davutoglu's fake apology today grants no recognition, accepts no responsibility, expresses no regret and offers no reparations," the group's director, Aram Hamparian, said. "President Obama has a historic opportunity to rejectTurkey's gag-rule, ending a shameful chapter ofU.S.complicity inAnkara's denial and moving Turkey,Armenia, and the region toward a better future based upon a truthful and just resolution of this crime."

Davutoglu said a service would be held at the Armenian Patriarchate in Istanbul.

Pope Francis last week referred to the killings as the "first genocide of the 20th century," sparking an angry reaction from Turkey which called back its ambassador to the Vatican. The European Parliament last week adopted a non-binding resolution to commemorate "the centenary of the Armenian genocide" while Germany's Parliament is set to use the term in a resolution on Friday.