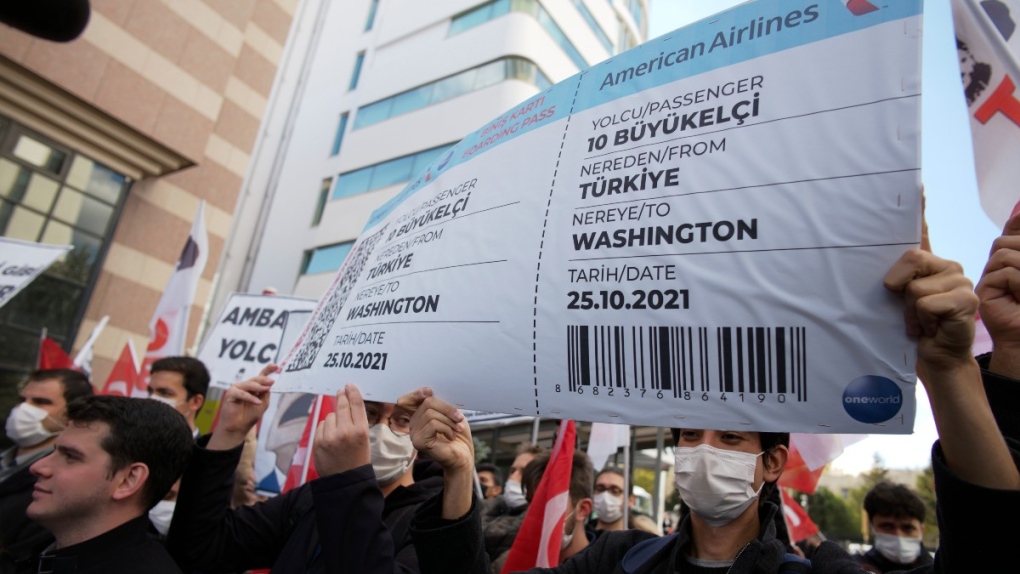 ISTANBUL -- Turkish President Recep Tayyip Erdogan late Monday stepped back from a threat to expel the ambassadors of 10 Western nations over their support for a jailed activist, defusing a potential diplomatic crisis.

"We believe that these ambassadors, who have fulfilled their commitment to Article 41 of the Vienna Convention, will now be more careful in their statements," he said in televised remarks following a three-hour Cabinet meeting in Ankara.

The envoys, including those of the U.S., Germany and France, last week called for the release of philanthropist Osman Kavala, who has been in a Turkish prison for four years awaiting trial on charges many view as unfounded.

As Monday's Cabinet meeting was underway, the U.S. Embassy in Ankara tweeted that it "maintains compliance" with Article 41, which outlines diplomats' duties to respect the laws of the host state and not to interfere in internal affairs. Other missions posted the same message.

State-run Anadolu news agency interpreted this as a "step back." Citing presidency sources, it reported that the development was "received positively" by Erdogan.

"Those who have shaped our country as they wished in the past panicked when Turkey made its own stand," Erdogan asserted after the meeting.

He portrayed the "outrageous" initial statement as a direct attack on Turkey's judiciary and sovereignty. "Our intention is never to create a crisis, but to protect the dignity of our country," the president said.

"Anyone who doesn't respect the independence of our country and the sensitivities of our nation, no matter what his title is, cannot be accommodated in this country."

In Washington, which had been seeking clarification of Erdogan's threat, State Department spokesman Ned Price declined to comment on what, if anything, Turkey had clarified, but noted the shift in position and said U.S. Ambassador to Turkey David Satterfield remains in the country.

"We will continue to promote the rule of law and respect for human rights globally," Price said. "The Biden administration seeks cooperation with Turkey on common priorities and, as with any NATO ally, we will continue to engage in dialogue to address any disagreements. We believe the best way forward is through cooperation on issues of mutual interest and we know that we have many issues of mutual interest with Turkey."

Erdogan announced on Saturday that he had ordered the envoys to be declared persona non grata, paving the way for them to be expelled from Turkey.

The crisis threatened fresh turmoil in Ankara's troubled relations with NATO allies and EU members. The Turkish lira plummeted after Erdogan's weekend statement, hitting an all-time low of 9.85 against the dollar on Monday morning.

The president's Monday comments marked the end of a tense two days, with no official statement on possible action against the diplomats since Saturday.

"The whole situation is a serious matter but we understand that the concerned countries have not yet been notified about any action," European Commission spokesman Peter Stano said earlier Monday.

A spokesman for German Chancellor Angela Merkel told reporters in Berlin, before Erdogan's later remarks, that "we take note of the statements of the Turkish President with concern and also with incomprehension."

"So far there has not been a formal announcement from the Turkish side," Steffen Seibert said, adding that "we are in close talks with our partners who are affected by a similar threat."

A group of about 40 pro-government protesters gathered near the U.S. Embassy in Ankara on Monday demanding the removal of the 10 envoys. Members of the Youth Union of Turkey carried banners including a mock-up of an airline boarding pass.

Kavala, 64, was acquitted in February last year of charges linked to nationwide anti-government protests in 2013, but the ruling was overturned and joined to charges relating to a 2016 coup attempt. He faces a life sentence if convicted.

The European Court of Human Rights called for his release in 2019, saying his incarceration acted to silence him and was not supported by evidence of an offense. The Council of Europe says it will start infringement proceedings against Turkey at the end of November if Kavala is not freed.

Although Kavala's continued incarceration has been widely criticized abroad, Turkey maintains he is being held according to the rulings of its independent judiciary.

Kavala's wife, Ayse Bugra, described his imprisonment as inexplicable. "There's no way this situation can be explained either logically or legally," she said in comments published on Halk TV's website on Monday.

Bugra, a professor of political economy, said the president's comments on Saturday, in which he compared her husband's imprisonment to the treatment of "bandits, murderers and terrorists" in other countries, contradicted the principle of judicial independence.

As a member of the Council of Europe Turkey is bound by the rulings of the European Court of Human Rights. Bugra said she regarded the ambassadors' statement as an effort to curtail possible action against Turkey.

"The Council of Europe's Committee of Ministers said it would impose sanctions if Osman is not released at the end of November," she said. "This is something serious. I interpret the envoys' initiative as a well-intentioned attempt to prevent things from becoming this way."

#OsmanKavala has been detained for 4 years. We urge #Turkey to ensure the transparency of its judiciary system and the full application of the #ruleoflaw, in line with its domestic laws and international obligations. Read our statement here⤵️ pic.twitter.com/sCVbI8SxS3