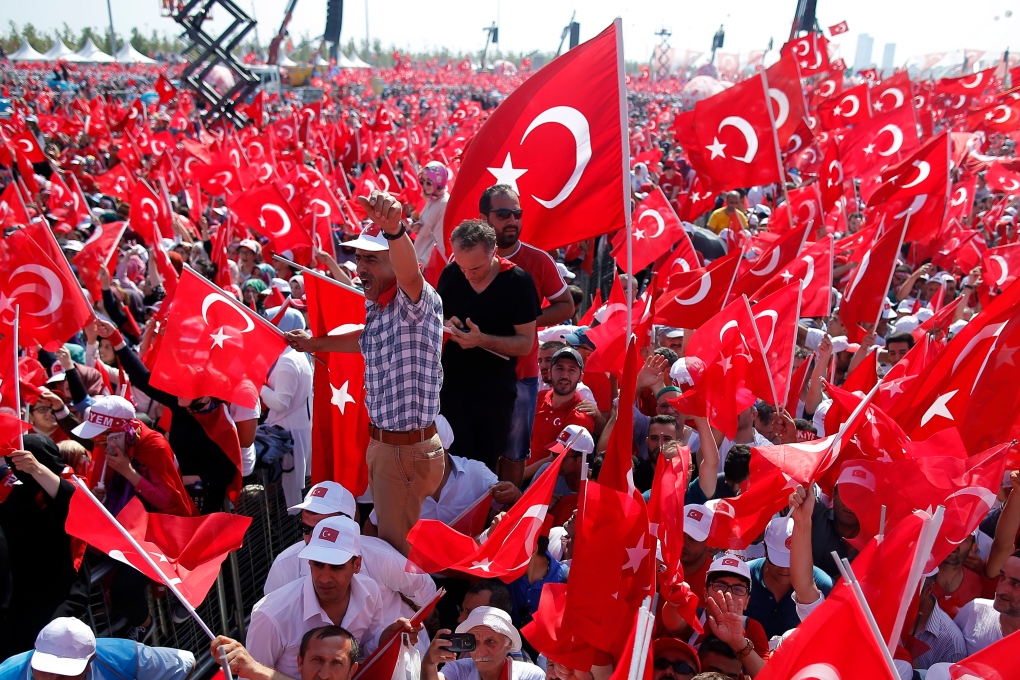 Turkish wave flags of their country as they attend a Democracy and Martyrs' Rally in Istanbul, Sunday, Aug. 7, 2016. (AP Photo/Emrah Gurel)

The decrees were passed Saturday, also instituting changes in due process and university administration.

Turkey declared a state of emergency soon after the July 15 coup attempt allowing the government to rule by decree with limited parliamentary involvement. Such decrees have been used to suspend tens of thousands of people from the public sector over suspected links to what the government calls terror organizations.

The latest dismissals include 2,534 personnel from the Justice Ministry, 2,219 from the Education Ministry, 2,774 from the Health Ministry, 1,267 from higher education institutions and 101 from the armed forces. The remaining 1,236 dismissals were across several different government departments and agencies.

The decree also reinstated 39 military personnel, including a general and an admiral, as well as 35 other civil servants who had been dismissed in earlier decrees.

The purges are aimed to eradicate a network linked to U.S.-based Muslim cleric Fethullah Gulen, which Ankara accuses of orchestrating the attempted coup. Gulen denies any involvement.

But Turkey's main opposition party and human rights groups have, however, accused the government of using emergency powers to clamp down on other dissenting voices-- not just the Gulen movement-- including Kurdish and left-leaning individuals and media outlets.

The 25-year-old monthly art, culture and literature magazine Evrensel Kultur condemned its closure in a statement: "There are many signatures under the closure decree. We are certain not a single one has read a single one of Evrensel Kultur's 299 issues" and ending with "we will not be silent, you don't be silent either."

According to the latest figures by the Turkish Journalists' Association, this latest round of closures brings the total number of outlets shut down to 170. In addition, 105 journalists have been imprisoned, over 700 press credentials revoked and a third of the media are currently unemployed.

The decrees also now allow judges to restrict suspects' access to lawyers as well as the recording of conversations between terrorism suspects and their lawyers.

The decrees also abolish elections for university presidents, who will now be directly chosen by President Recep Tayyip Erdogan among three candidates presented by the Board of Higher Education.

"Everything is between one man's lips," Larabiyik said. "They are dragging us to a one-man regime as a fait accompli. This is nothing more than abusing the state of emergency," questioning whether this was an attempt by the ruling party to bring to life its ideology.