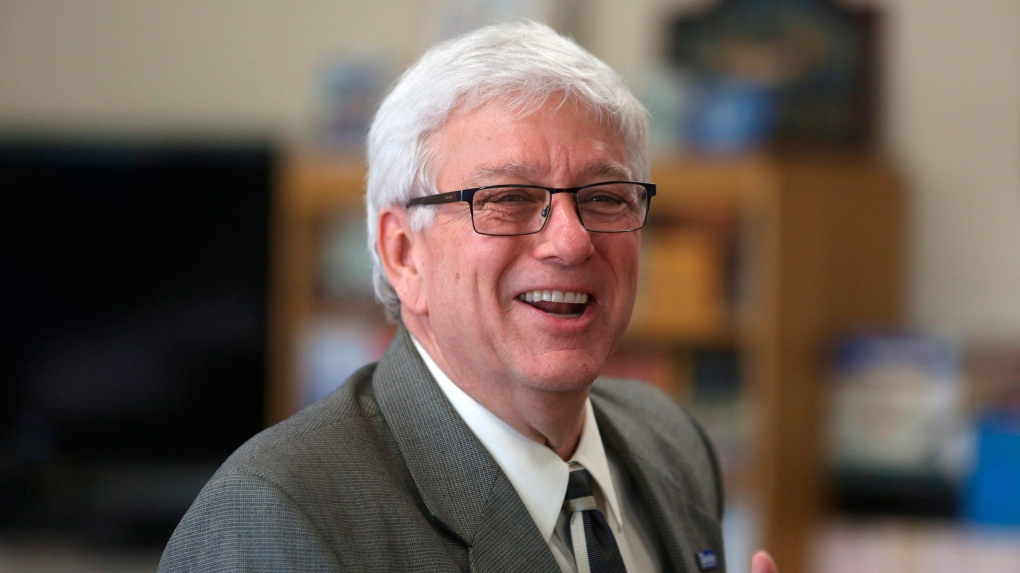 In a Wednesday, Sept. 18, 2013 photo, Jerry R. Foxhoven, executive director, Drake Legal Clinic, speaks at a meeting of the governor's task force at the Iowa Juvenile Home in Toledo, Iowa. Emails obtained by The Associated Press show that Iowa Department of Human Services Director Jerry Foxhoven routinely sent messages to employees lauding Shakur's music and lyrics even after at least one complained to lawmakers. Then in June 2019 he sent another such email to all 4,300 agency employees. He was abruptly ousted from his job the next work day. He is now speaking up about being asked to continue paying the salary of a woman moving out of his department. (Charlie Litchfield/Des Moines Register via AP)

DES MOINES, Iowa -- A former Iowa state official, whose affinity for lauding rapper Tupac Shakur to colleagues drew attention after he was unexpectedly asked to resign by the governor, said Wednesday he had objected to the governor's request that he continue paying the salary of a woman moving from his department to the governor's office.

Jerry Foxhoven confirmed to The Associated Press that he declined to approve paying the salary of Elizabeth Matney, who left DHS on May 17 to accept a job as Gov. Kim Reynolds' adviser on health policy.

Documents obtained by AP from the governor's office show a memorandum of understanding between the governor's office and DHS was signed more than a month later on June 19. It indicates Reynolds' office was to bill DHS for wages and salaries from May 17 through June 30, the end of the current fiscal year.

It is signed by Reynolds' Chief of Staff Sara Craig. The document was initially drafted with Foxhoven's name , which is crossed out and replaced in handwritten script with the name of Gerd Clabaugh, the interim director of DHS named by Reynolds to replace Foxhoven. Clabaugh signed it.

Foxhoven was asked to resign on June 17. He has declined to say why. Reynolds has only said she asked him to leave for several reasons and she wanted to go in a new direction.

Spokesman Pat Garrett said Foxhoven never raised an objection to paying Matney out the DHS budget to the governor's office. He said the document was prepared before Foxhoven left but not signed until after Clabaugh was interim director.

When asked Wednesday if he objected to paying Matney out of his department's funds, Foxhoven replied: "Yes, that's what they got their own appropriation for."

He declined to specify if it had any bearing on his departure.

Foxhoven's departure gained national attention last week after the AP reported on the former agency director's love of the late rapper Tupac Shakur and that he was asked to resign only days after sending an email to 4,300 state workers asking them to mark Shakur's birthday. After initially declining to say if Foxhoven's interest in Shakur led to his departure, the governor's office later said his praise of the rapper wasn't a factor.

Lawmakers approved a $200,000 increase in Reynolds' office budget, enough for two additional staffers but that's for fiscal year 2020 which began on July 1. Republican leaders at the time defended the increase by saying the governor planned to use it for analysts focusing on important policy areas including tax reform and health care.

She has only posted positions for a public relations manager.

"There's definitely a cloud hanging over this especially when legislators were told the money was for those two positions," said Democratic Sen. Pam Jochum.

Garrett said Matney is now being paid from the governor's office budget.

Other governors have paid staff members out of the budgets of other departments when the employee continues to do significant work for the agency.

Gary Dickey, a Des Moines attorney who worked for former Democratic Gov. Tom Vilsack and was paid out of an economic development budget department said it's not an unusual arrangement

"As long as work is being performed on behalf of the agency that's paying the salary I don't see a problem with it," he said. "I understand concerns about lack of transparency. You could make an argument that it's more transparent since you're tying the cost directly to the agency to which the work is related."

Documents from Reynolds' office also show Paige Thorson, Reynolds' deputy chief of staff, was paid out of DHS funds while she was a health care policy adviser.

Paul Trombino III, the governor's chief operations officer, is paid out of several agency budgets. The Iowa Department of Administrative Services pays 45% while the Iowa Economic Development Authority, Office of the Chief Information Officer and Iowa Workforce Development each pay 25% of his $155,000 salary.