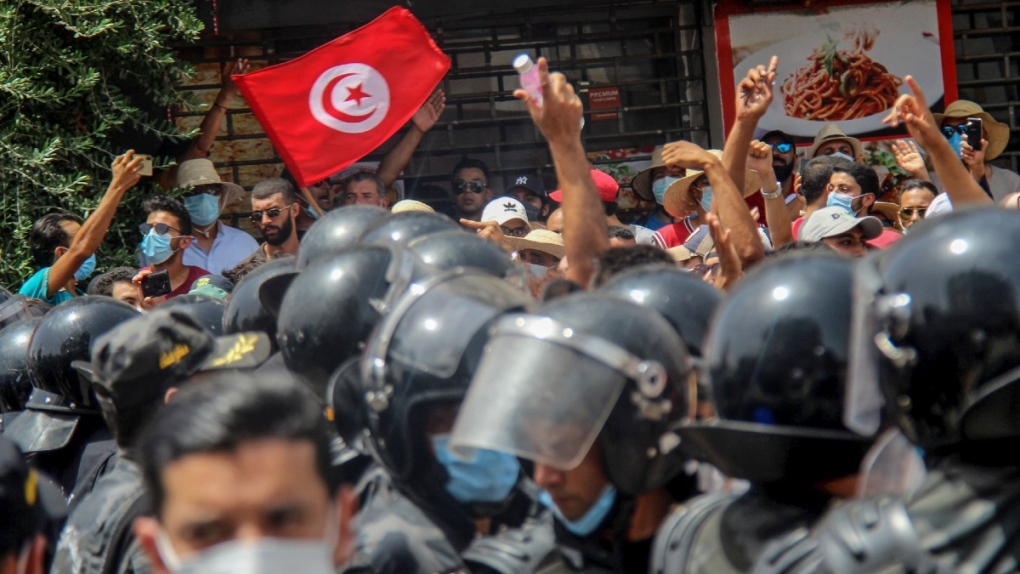 TUNIS, TUNISIA -- Troops surrounded Tunisia's parliament and blocked its speaker from entering Monday after the president suspended the legislature and fired the prime minister and other top members of government, sparking concerns for the North African country's young democracy at home and abroad.

In the face of nationwide protests over Tunisia's economic troubles and the government's handling of the coronavirus crisis, President Kais Saied decided late Sunday to dismiss the officials, including the justice and defense ministers.

He announced a series of other measures Monday, including a nationwide curfew from 7 p.m. to 6 a.m. for one month and a ban on gatherings of more than three people in public places. He denied allegations that he was fomenting a coup d'etat.

Some demonstrators cheered the firings, shouting with joy and waving Tunisian flags.

But others accused the president of a power grab, and the country's overseas allies expressed concern that it might be descending again into autocracy. In a move sure to fuel those worries, police raided the offices of broadcaster Al-Jazeera and ordered it shut down.

Tunisia, which ignited the Arab Spring in 2011 when protests led to the overthrow of its longtime autocratic leader, is often regarded as the only success story of those uprisings.

But democracy didn't bring prosperity. Tunisia's economy was already flailing before the pandemic hit, with 18% unemployment, and young people demanding jobs and an end to police brutality protested in large numbers earlier this year.

The government recently announced cuts to food and fuel subsidies as it sought its fourth loan from the International Monetary Fund in a decade, further fueling anger in impoverished regions.

The pandemic has only compounded those problems, and the government recently reimposed lockdowns and other virus restrictions in the face of one of Africa's worst outbreaks.

Angry at the economic malaise and the poor handling of the pandemic, thousands of protesters defied virus restrictions and scorching heat in the capital, Tunis, and other cities Sunday to demand the dissolution of parliament. The largely young crowds shouted "Get out!" and slogans calling for an early election and economic reforms. Clashes erupted in many places.

"I must shoulder the responsibility and I have done so. I have chosen to stand by the people," the president said in a solemn televised address.

Saied said he had to fire the prime minister and suspend parliament because of concerns over public violence. He said he acted according to the law -- but parliamentary speaker Rached Ghannouchi, who heads the Islamist party that dominates the legislature, said the president didn't consult with him or the prime minister as required. The three have been in conflict.

"We have taken these decisions ... until social peace returns to Tunisia and until we save the state," Saied said.

While the dissolution of parliament cheered some protesters, others in Tunisia were opposed. Police intervened Monday to prevent clashes outside the parliament building between demonstrators supporting the president and lawmakers from the dominant Ennahdha party and their allies who opposed the move. Both sides shouted and some threw stones, according to an Associated Press reporter.

Ghannouchi, the speaker, tried to enter parliament overnight, but police and military forces guarding the site stopped him. He sat in a car outside the building for nearly 12 hours before leaving Monday afternoon -- his next steps were unclear.

He called the president's move "a coup against the constitution and the (Arab Spring) revolution," and insisted the parliament would continue to work.

Saifeddine Makhlouf, founder of and lawmaker in a coalition of hardline Islamists, also denounced the president's move as a coup, saying, "We will not let it pass."

However, the president, a former constitutional law professor elected in 2019, rejected allegations during a meeting Monday with representatives of several national organizations that he was engaging in a coup.

"I ask how some can talk of a coup d'etat," Radio Mosaique quoted Saied as saying. "I studied and taught law. I applied the constitution, respecting its dispositions."

The president invoked a constitutional article that allows him to assume executive power for an unspecified period of time in cases of "imminent danger threatening the institutions of the nation and the independence of the country and hindering the regular functioning of the public powers."

Tensions between the prime minister and president have been blamed for poor management of the virus, while a bungled vaccination drive led to the dismissal of the health minister this month.

To date, 7% of the population has been fully vaccinated, while more than 90% of the country's intensive care unit beds are occupied, according to health ministry figures. Videos have circulated on social media showing bodies left in the middle of wards as morgues struggle to deal with growing deaths.

Ennahdha has been a particular target, accused of focusing on its internal concerns instead of managing the virus.

Security forces also moved in Monday on the Tunis offices of Al-Jazeera, the Qatar-based satellite news network said on its Facebook page. The reason for the move was not immediately clear.

Al-Jazeera, citing its journalists, said 10 "heavily armed police officers" entered their bureau without a warrant and asked everyone to leave. "The reporters' phones and other equipment were confiscated, and they were not allowed back into the building to retrieve their personal belongs," the network said.

Qatar and its Al-Jazeera have been viewed by some Middle Eastern nations as promoting Islamist groups like the Muslim Brotherhood. Its offices have been shut down in other countries over that, most noticeably in Egypt after the 2013 coup that brought current President Abdel-Fattah el-Sissi to office.

Qatar's Foreign Ministry said it hoped "the voice of wisdom" would prevail in the turmoil and that the rule of law would be established again.

Inside and outside Tunisia, from the U.N. to the U.S, the European Union and beyond, concern was raised about whether the nascent democracy was taking an authoritarian turn.

Former President Moncef Marzouki called for political dialogue, saying in a Facebook video, "We made a huge leap backward tonight, we are back to dictatorship."

Potential violence and respect for Tunisia's institutions were at the forefront of concerns by allies.

"The already volatile region "cannot bear to have more unrest than it has presently had," U.N. deputy spokesman Farhan Haq said.

U.S. Secretary of State Antony J. Blinken spoke by phone with the Tunisian leader, encouraging him "to adhere to the principles of democracy and human rights that are the basis of governance in Tunisia," State Department spokesman Ned Price said. Blinken also asked that Saied "maintain open dialogue with all political actors and the Tunisian people."

While German Foreign Ministry spokesperson Maria Adebahr stopped short of calling the presidential actions a coup, she said the Tunisian president appeared to be relying on a "pretty broad interpretation of the constitution."

France, Tunisia's former colonial ruler, said it counts on "respect for a state of law and the return, as soon as possible, to the normal functioning of institutions."