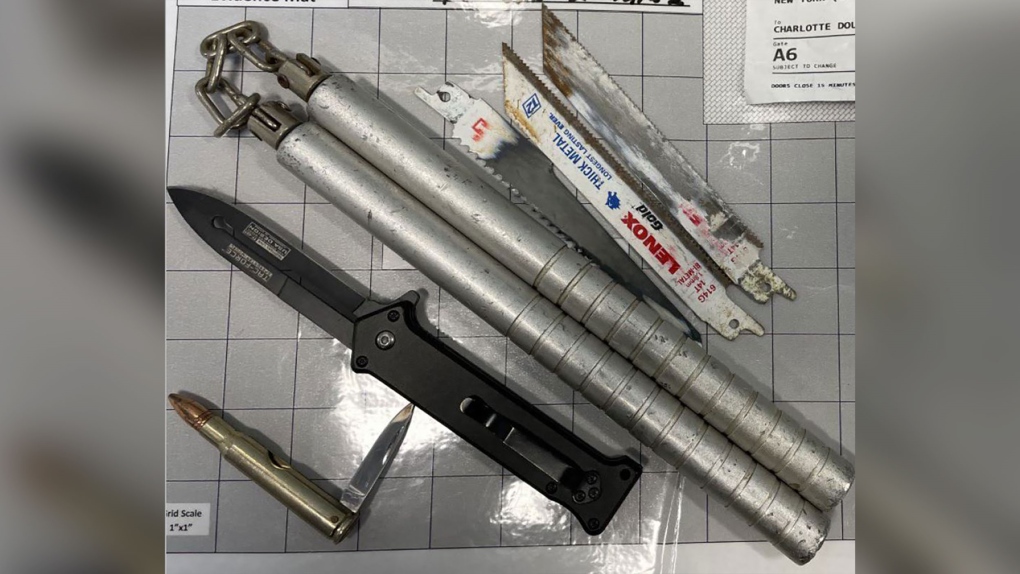 A TSA spokesman tweeted an image of the the weapons -- three saw blades, nunchucks, a switchblade and a knife that folds into a bullet-shaped sheath. (TSA)

Forget that soda bottle or errant tube of toothpaste.

One airline passenger thought it was a dandy idea to place a six-pack of sharp or potentially dangerous items into his carry-on bag at LaGuardia Airport in New York City on Sunday.

It was quite the array, totaling three saw blades, one pair of nunchucks, a switchblade and a folding knife for good measure.

However, the Transportation Security Administration doesn't approve of such things as carry-ons. The items were caught during pre-departure screening, and the agency later sent out a "lump of coal" chastisement on Twitter highlighting the incident:

"A lump of coal for this guy for the holiday. Six prohibited items among a traveler's carry-on items at @LGAairport on Sunday - 3 saw blades, nunchucks, a switchblade and a knife that folds into a bullet-shaped sheath. @TSA recommends packing these items in a checked bag."

TSA spokesperson Lisa Farbstein, who posted the tweet, told CNN Travel in an email Monday afternoon that the items were not illegal, but are prohibited in carry-on bags. They are allowed, however, in travelers' checked luggage.

"So no arrest. The individual repacked them in a checked bag and continued their trip as planned," Farbstein said.

What reason did the traveler have for such a stash in their carry-on? "They said they were moving," Farbstein said.

A CORNUCOPIA OF ITEMS

It remains to be seen if this passenger's array of sharps would be among the TSA's most unusual recent finds.

Each year, TSA releases its "Top 10 Catches," a roundup of the most bizarre items the agency has confiscated. While there's still most of another month to go for weird items to surface for 2022, TSA's 2021 list included:

Click here to find out what the other seven items were.

So next time you're flying and you have an urge to put that baseball bat, bowling pin and boxing gloves in your carry-on, check here first and find out which one of the three is allowed.