Trumps move to quash subpoenas for their testimony in civil investigation 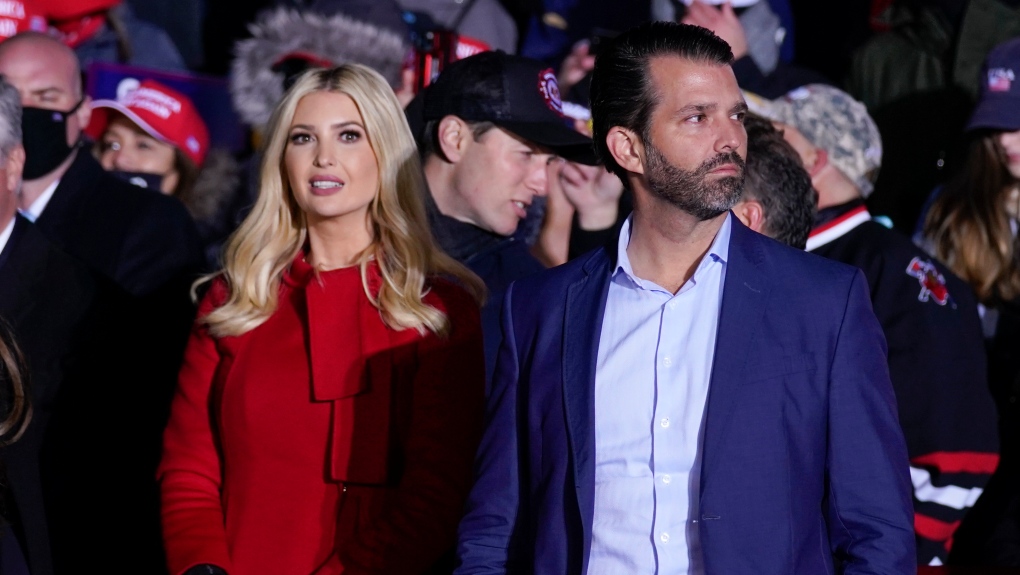 The Trumps moved late Monday to quash subpoenas from the New York attorney general's office to two of former U.S. President Donald Trump's children seeking their testimony as part of its civil investigation into whether the Trump Organization manipulated the values of its properties.

Lawyers for the former President, Donald Trump Jr. and Ivanka Trump, who were subpoenaed on December 1, asked a judge to quash subpoenas for their testimony, arguing New York Attorney General Letitia James is seeking to "circumvent the entire grand jury process." Allowing the testimony, they argued, would set a "dangerous precedent."

The Trump lawyers argued in the court filing that James is trying to leverage the civil investigation her office has been conducting since 2019 to aid a criminal investigation led by the Manhattan district attorney's office, known as DANY, that she joined earlier this year.

A deposition in the civil case, they wrote, "is effectively the same as a deposition by the DANY, but without providing the constitutional protections afforded every witness through the grand jury process." Witnesses called before a New York state grand jury are given transactional immunity for their testimony and can't be prosecuted unless they lie under oath. James, they argued, is trying to get around those rights by seeking the testimony in a civil case, which could then be used by criminal prosecutors. If they don't testify, in a civil case a jury can hold that against defendants or draw an adverse inference.

"This is a rather transparent gambit. By attempting to play both sides, Ms James is in a position to cherry pick her investigatory methods -- civil or criminal -- in a calculated manner to, for example, leverage a Fifth Amendment assertion and obtain an adverse inference" in the civil investigation, they wrote, adding that absent a criminal investigation, the Trumps "might well be inclined to testify."

The Trumps' lawyers requested a hearing to argue their position.

The subpoenas for Trump's children were made public Monday in a court filing where the judge set a briefing schedule to handle the dispute. CNN reported last month that Trump himself had been subpoenaed for testimony. James' office will have two weeks to respond to the motion to quash the subpoenas and then the Trump lawyers will have time to reply, meaning a decision over the subpoenas is not expected for at least a month.

Eric Trump, an executive vice president at the company, was previously subpoenaed and provided his testimony in late 2020. Since then, James joined the criminal investigation, which covers the same topics as the civil investigation and is looking into the accuracy of financial statements the Trump Organization used when seeking financing.

The Trump filing Monday included more than two dozen exhibits, including tweets and transcripts of James' public statements, to support their assertion that she has a dual role.

The Trumps have asked the judge to quash the subpoenas, which they made public, or put them on hold until the criminal investigation is complete. The subpoenas are seeking multiple forms of communication and financial statements prepared by the Trumps' accountants dating back to 2010.

The subpoenas also seek records relating to the Trump hotel in Chicago and conservation easements, or tax benefits, taken on properties including the family's Seven Springs estate in New York. Additionally, the subpoenas seek all communications with Forbes magazine, which wrote articles about Trump's wealth, and records relating to its insurance coverage and renewal of the plans.

The Trumps' pushback marks a new showdown in the ongoing investigations into the Trump Organization and its finances. Trump attorneys have fought subpoenas for documents and testimony in the civil and criminal investigations, going to the US Supreme Court twice over a grand jury subpoena to its longtime accounting firm.

Authorities have prevailed in their subpoena fights, at least in the litigation that has been public, but the disputes have caused delays.

Monday night, James' office issued a statement in response to the motion saying that "despite their names, they must play by the same rules as everyone else. These delay tactics will not stop us from following the facts or the law, which is why we will be asking the court to compel Donald Trump, Donald Trump Jr., and Ivanka Trump to testify with our office under oath. Our investigation will continue undeterred."

The civil subpoenas come as prosecutors with the Manhattan district attorney's office have interviewed additional witnesses in recent weeks and brought others before the grand jury.

An attorney for Trump earlier Monday reiterated his claims that the investigation is politically motivated.

"Letitia James is the single most unethical Attorney General this country has ever seen," said Alina Habba, an attorney representing Trump. "The way she has weaponized her office through this political witch hunt exceeds all bounds of prosecutorial standards and violates basic constitutional rights. Her actions are a threat to our democracy and I plan to hold her accountable to the fullest extent."

The Trump Organization sued James' office last month alleging she is biased and her investigation into the former President and his company is unconstitutional. It has asked a judge to block the civil investigation.