Trump urges GOP to 'get tougher and fight' impeachment 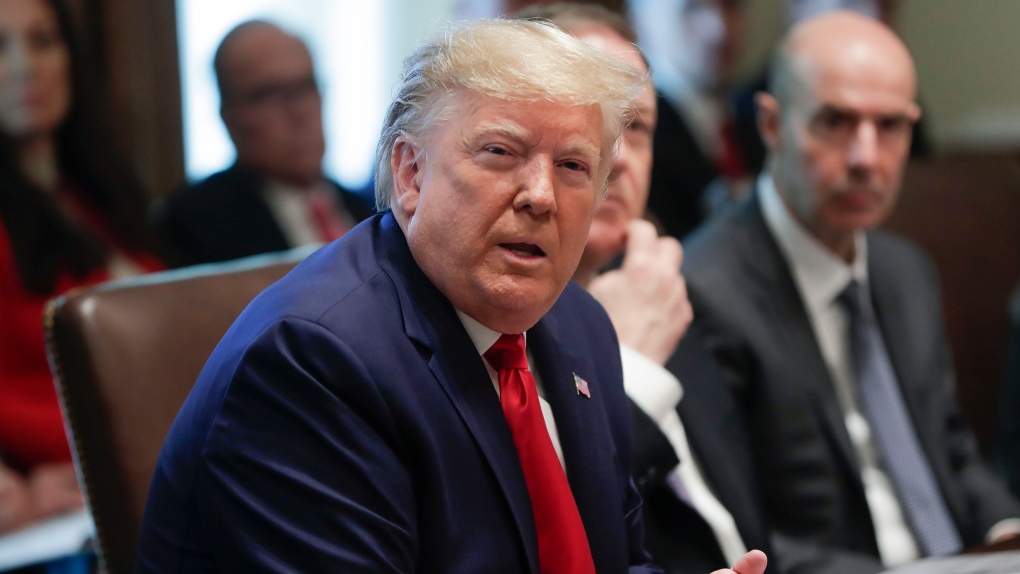 WASHINGTON -- U.S. President Donald Trump called on fellow Republicans on Monday to "get tougher and fight" against the quickly moving House impeachment inquiry as Democrats blocked a GOP bid to censure Democratic Rep. Adam Schiff, a leader of the impeachment inquiry.

Trump, defending his conduct at a rollicking Cabinet meeting, insisted his phone call with Ukrainian President Volodymyr Zelenskiy that sparked the impeachment inquiry was entirely unproblematic. And he accused Democrats of proceeding with impeachment only to bolster their chances in 2020.

Trump also called out Republicans for not sticking together, pointing a finger at Utah Sen. Mitt Romney, who has emerged as his most notable GOP critic.

While eviscerating Democrats' policies, Trump said he respects members of the party for sticking together.

Hours after Trump spoke, Democrats blocked a bid by House Republicans to censure Schiff, chairman of the House Intelligence Committee and a leader of the impeachment inquiry.

Rep. Andy Biggs, R-Ariz., sponsored the resolution, which criticizes the way Schiff is conducting the investigation. Biggs and other Republicans say Schiff misled voters when he "manufactured a false retelling" of a conversation between Trump and Zelenskiy at a committee hearing last month. Schiff has said his words were meant as a parody.

"Chairman Schiff deliberately misled the American people during a high-profile hearing last month, and he has persistently used his perch on a vital committee to spread falsehoods about President Trump," Biggs said.

Republicans also complained that Schiff's office met with a whistleblower in the case and said the inquiry is being conducted in secret and they've been unable to see transcripts of closed-door interviews. The interviews include discussions of some classified material, and Schiff has said depositions must be conducted in private. Witnesses are being separated to prevent them from co-ordinating testimony or concealing the truth, he said.

Democrats say that Schiff has acted in a fair and bipartisan manner and that redacted transcripts of the depositions will be released.

The House voted 218-185 Monday along party lines to postpone a vote on the GOP resolution. Justin Amash, a Republican-turned-independent from Michigan, voted with the Democrats.

Schiff, D-Calif., tweeted after the vote that House Republicans "lacked the courage to confront the most dangerous and unethical president in American history" and instead "consoled themselves by attacking those who did" confront Trump.

House Speaker Nancy Pelosi called Schiff a great patriot. "What the Republicans fear most is the truth," Pelosi said in a statement. "The president betrayed the oath of office, our national security and the integrity of our elections, and the GOP has not even tried to deny the facts.Instead, Republicans stage confusion, undermine the Constitution and attack the person of whom the president is most afraid."

House Minority Leader Kevin McCarthy, R-Calif., said Schiff has fallen short in his duty and "demonstrated a pattern of lying to the American people on matters of intelligence."

The vote blocking the Republican censure attempt "only further illustrates the Democrats' ignorance to Chairman Schiff's reckless behaviour and underscores their blind determination to damage this country," McCarthy said.

Trump, meanwhile, said some GOP lawmakers "are great fighters. But they have to get tougher and fight because the Democrats are trying to hurt the Republican Party for the (2020) election."