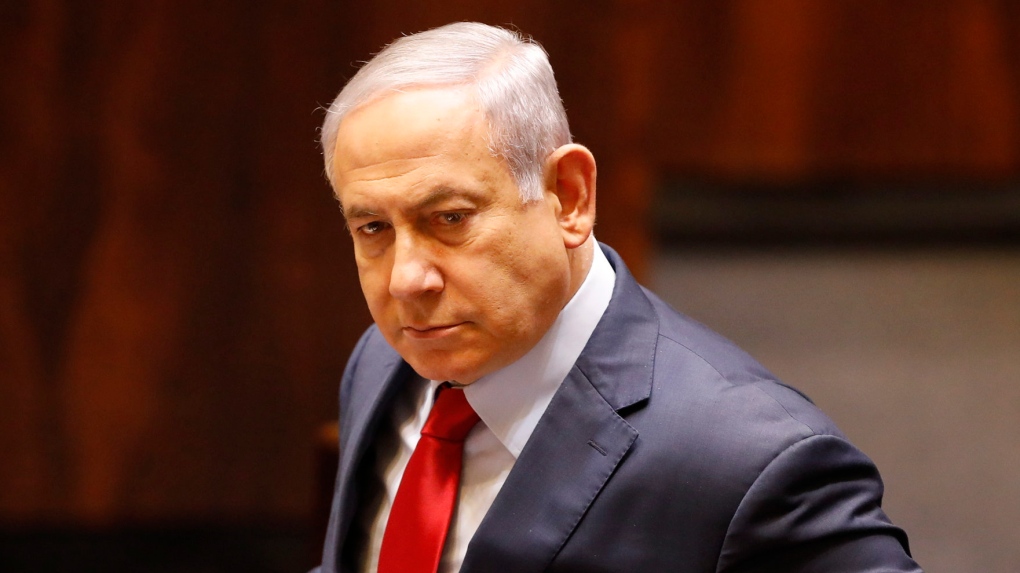 JERUSALEM -- U.S. President Donald Trump said Monday that while the Palestinians have already rejected his proposed Mideast peace deal, he expects they ultimately will agree to the blueprint the White House plans to announce following meetings with Israeli Prime Minister Benjamin Netanyahu and his chief challenger Benny Gantz.

The meetings come just a month before Netanyahu and Gantz are set to face off in national elections for the third time in less than a year and amid skepticism over whether the plan has any chance for success. Palestinians haven't been consulted about it and have preemptively rejected any proposal from a White House it considers biased toward Israel.

But Trump said he expects that while the Palestinians will say no to the plan he's expected to publicly release Tuesday, they will quietly be negotiating.

Trump called the proposal a great "opportunity" but wouldn't discuss further details, noting that its release has long been delayed because of the uncertain political situation in Israel. He refused to answer questions over whether it would include Israeli annexation of parts of the West Bank.

"We're going to show a plan. It's been worked on by everybody and we'll see whether or not it catches hold. If it does that would be great and if it doesn't, we can live with it too. But I think it might have a chance," he said.

The proposal is expected to be very favourable to Israel, and Netanyahu has hailed it as a chance to "make history" and define Israel's final borders.

In the run-up to the March 2 vote, Netanyahu has called for annexing parts of the West Bank and imposing Israeli sovereignty on all its settlements there. Israel captured the West Bank in the 1967 Mideast war, and the Jordan Valley in particular is considered a vital security asset.

Reports in Israeli media have speculated Trump's plan could include the possible annexation of large pieces of territory that the Palestinians seek for a future independent state. American approval could give Netanyahu the type of cover to go ahead with a move that he's resisted taking for more than a decade in power.

Annexing Israel's settlements in the occupied West Bank would appeal to Netanyahu's hard-line nationalist supporters but would almost certainly torpedo the viability of an independent Palestinian state and likely infuriate neighbouring Jordan. In 1994, Israel and Jordan signed a peace treaty, the second between Israel and its Arab neighbours after Egypt.

Netanyahu, with an eye to his base, invited several settler leaders to join him in Washington for the rollout of the plan.

Palestinian Prime Minister Mohammad Shtayyeh denounced the still-unpublished proposal again Monday in Ramallah, saying it "doesn't constitute a basis for resolving the conflict." He said the plan violates international law and "comes from a party that has lost its credibility to be an honest broker in a serious and genuine political process."

A Palestinian official said that President Mahmoud Abbas has rejected overtures from mediators in recent weeks to arrange a phone call with Trump. The official spoke on the condition of anonymity because he was discussing a classified diplomatic issue. Abbas' spokesman also called on ambassadors of Arab countries who have been invited to the White House Tuesday to boycott the event.

The Trump administration took several steps in recent years that angered the Palestinians. Those included recognizing the contested city of Jerusalem as Israel's capital and moving the U.S. Embassy there, closing Palestinian diplomatic offices in Washington and cutting funding to Palestinian aid programs.

At the White House, Netanyahu pointed out Trump's various gestures to Israel as well as his strong stance against Iran. A statement from Netanyahu's office said most of the meeting focused on Iran, though the peace plan was also discussed.

Netanyahu remained coy about what the pending proposal included.

"The list of your support for Israel, the things you have done for Israel since you've become president, is very long. But the bottom line is short. You have made out alliance stronger than ever," he said.

Shortly after his meeting with Trump ended, Gantz was invited into the White House for his first meeting with Trump. Speaking to reporters later, he vowed not to disclose the contents of their conversation. But Gantz also showered Trump with praise. He called his peace plan "a significant and historic milestone" that he looked forward to implementing once he became prime minister, in tandem with other countries in the region -- specifically mentioning Jordan.

Regardless of the outcome of his summit with Trump, Netanyahu's foray to Washington gives him a major boost. The longtime leader has been reeling from a stiff challenge from Gantz and the fallout of his indictment on corruption charges. The Israeli parliament is expected to reject his request for immunity on Tuesday, and a damaging criminal trial looms.

Gantz, a former military chief, has focused his campaign on Netanyahu's legal problems and his character, saying he is unfit for office. "Netanyahu will not be able to also manage a country and also manage his trial," Gantz added in Hebrew in Washington.

Netanyahu has sought to portray himself as a global statesman uniquely qualified to lead Israel through difficult times. He has tried to use his close friendship with Trump as a strategic asset to stay in power.

Trump, himself under the cloud of his impeachment trial in the Senate, appears poised to offer Netanyahu some needed help in the form of the most generous American peace proposal ever. Previous peace plans have included conditions for Israeli withdrawals and the prospect of evacuating Jewish settlements.

Netanyahu was charged in November with fraud, breach of trust and accepting bribes in three cases involving accepting gifts from billionaire friends and trading political and regulatory favours for positive news coverage. Gantz's centrist Blue and White party refuses to sit with him in government because of the charges but has been careful not to scare off his voters by veering too far left.

Gantz's decision to travel to Washington separately reflected his need to remain on good terms with Trump while keeping his distance from Netanyahu.

In two election rounds neither has been able to secure a required parliamentary majority without the other's support. Each is seeking a knock-out punch in the upcoming third round.

Trump has delivered political favours to Netanyahu during the previous two races as well, only to see his friend fall short of victory. Netanyahu's confidants have suggested that his motivations are mostly ideological, since he may be coming to terms with an end to his lengthy career and is eager to leave West Bank annexation behind as a form of legacy.