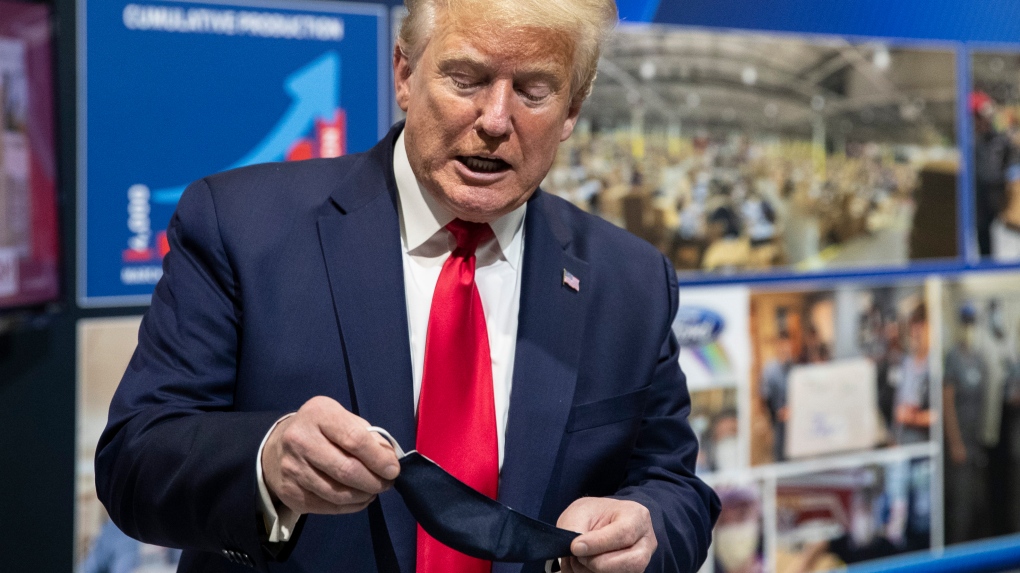 U.S. President Donald Trump holds his protective face mask as he speaks while touring Ford's Rawsonville Components Plant that has been converted to making personal protection and medical equipment, May 21, 2020, in Ypsilanti, Mich. (AP Photo/Alex Brandon)

WASHINGTON -- After long resisting wearing a mask in public, U.S. President Donald Trump said Wednesday he thinks it makes him look like the Lone Ranger -- and he likes it.

"I'm all for masks. I think masks are good," Trump told Fox Business in an interview. "People have seen me wearing one."

Trump's comments came a day after Republican lawmakers suggested that he wear a mask in public to set a good example for Americans.

"If I were in a tight situation with people, I would absolutely," Trump said in the interview.

Trump has long resisted being photographed in a mask. In early April, the Centers for Disease Control and Prevention recommended that people wear cloth face coverings in public settings where other social distancing measures were difficult to maintain.

Trump immediately undercut the CDC guidance by flatly stating that he wouldn't be following it, suggesting it would be unseemly for the commander in chief to wear a mask as he meets with heads of state.

On Wednesday, he sounded a different tone, saying, "I had a mask on. I sort of liked the way I looked. OK. I thought it was OK. It was a dark black mask, and I thought it looked OK.

"It looked like the Lone Ranger," he continued, a reference to the fictional law-and-order character from the American Old West who wore a black eye mask. "I have no problem with that, and if people feel good about it, they should do it."

In recent days, many Republicans and members of the White House coronavirus task force have been more outspoken in advocating for Americans to wear face masks in public settings as infections have surged in huge swaths of the South and West.

The presumptive Democratic presidential nominee, former Vice-President Joe Biden, said last week that he would pursue a federal mask mandate, if elected. In the interview, Trump suggested a federal mandate was unnecessary and continued to frame mask wearing as a matter of choice.

Even so, Trump criticized Biden for wearing a mask while he is some distance away from his audience and for speaking through the covering at times.

"When there's nobody around, I don't see any reason to be wearing it," Trump said in a separate interview Wednesday on "America This Week."

About the virus, Trump continued to characterize it as a nuisance that he hopes will just go away.

"I think we are going to be very good with the coronavirus. I think that, at some point, that's going to sort of just disappear, I hope," Trump said on Fox Business.

White House senior adviser Kellyanne Conway noted Wednesday that Trump is regularly tested for the coronavirus, as are his aides. White House visitors and members of the news media who are in close proximity to him and Vice-President Mike Pence are also tested.

Trump also told Fox Business that people have seen him wearing a mask. But only one image has surfaced of the president wearing a mask. He donned it for a behind-the-scenes tour of a Ford facility in Michigan in May. Reporters were not allowed to accompany Trump on the tour.

Afterward, he told reporters he had worn a mask in a "back area" only because "I didn't want to give the press the pleasure of seeing it."

Other world leaders, including Canada's Justin Trudeau and France's Emmanuel Macron, have worn masks in public to encourage their use.

Trump on Wednesday also continued to push back against the notion that some states may have been too quick to open up. Several states, including Florida, New York and Texas, have paused or slowed down reopening amid the recent increase in confirmed cases.

Trump suggested Democrats are hyping concerns about the spike to politically damage him.

"I think the Democrats would like to see the country stay closed as long as possible because they figure that's probably good for the election, because it would be bad a little bit for jobs, and maybe a lot for jobs," Trump said.