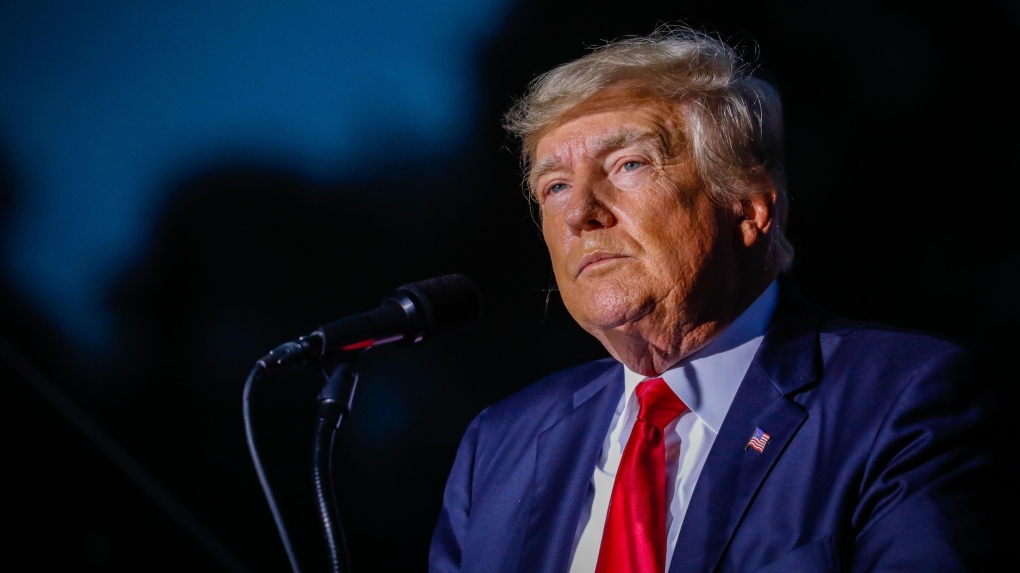 GROVE CITY, OHIO -- As soon as it became clear last week that a Texas congressional candidate backed by Donald Trump would be defeated in a special election, the former president's allies quickly shifted their attention to Ohio to ward off another embarrassing loss.

Make America Great Again, a super PAC chaired by Trump's former campaign manager, quietly purchased US$300,000 in Ohio television advertising. The buy was intended to provide a late-stage boost to another Trump-backed candidate facing a crowded field of Republicans in a special election on Tuesday.

The midsummer race for Ohio's traditionally Republican 15th Congressional District wouldn't typically get much national attention. But it's suddenly becoming a high-stakes test of Trump's endorsement power, which he has wielded as a cudgel to silence opposition in the GOP.

Low-turnout special elections aren't perfect measures of Trump's strength and he remains a powerhouse in GOP politics, revealing over the weekend that his political action committees are sitting on a massive US$100 million pile of cash. But a second loss in two weeks could chip away at Trump's self-proclaimed kingmaker status heading into next year's midterm elections.

“If it happens a couple times, candidates and political professionals - they're not stupid - they're going to say you can win this race even if you're not endorsed by Trump,” said Ohio Republican consultant Ryan Stubenrauch.

In other cases, Trump's decision to throw his weight behind candidates with baggage, including several running against GOP incumbents who crossed him by voting in favor of his second impeachment, has put him at odds with other party leaders. Some Republicans fear his moves could complicate efforts to win back majorities in the House and Senate next year.

In an interview, Carey described the pitch he made to Trump when the two met for what he thought would be a photo-op earlier this year.

“I said, `Listen, Mr. President, you've been somebody that supported a lot of political candidates over the course of your lifetime, and many of them let you down.' I said, `I'm kind of in the same boat - I mean, on a much smaller scale,”' Carey recalled. “After about an hour and 20 minutes, he said, `I'm all in. I'm going to endorse you and do whatever it takes to get you over the finish line.”'

Trump, who headlined a rally with Carey in June, reupped his endorsement last week, decrying candidates who have used his likeness or cited him in ads to try to woo voters. “I don't know them, and don't even know who they are. But I do know who Mike Carey is - I know a lot about him, and it is all good,” Trump said in a statement. “Let there be no further doubt who I have Endorsed!”

About 560,000 voters are registered to vote in Ohio's 15th Congressional District, which leans Republican. Half of its voters live in parts of Franklin and Fairfield counties, primarily suburban Columbus communities that Republicans for generations could count on, but where Trump lost support in 2020. In the sparsely populated remainder of the district, Trump improved over his 2016 performance, as he did throughout rural Ohio.

It can be tough to draw firm conclusions from a pair of low-turnout special elections, especially in Ohio, where the large field of candidates could split the vote in unexpected ways.

But Trump has put great personal stock in his endorsements and frequently touts his record of wins. His formal backing remains highly coveted, with candidates making pilgrimages to Trump's homes in Florida and New Jersey to win his favor.

Some advisers have urged Trump to be more judicious in his choices and avoid wading into races where there is no clear front-runner to preserve his reputation. And many expect that Trump will be less apt to weigh in on crowded primaries going forward.

In Texas, Trump had backed Susan Wright, the widow of Republican Rep. Ron Wright, who died in February after being diagnosed with COVID-19. Trump released multiple statements touting his “Complete and Total Endorsement,” recorded a robocall late in the runoff and the Make America Great Again super PAC made a $100,000 ad buy.

Nonetheless, she lost to fellow Republican Jake Ellzey, who sought to overcome Trump's snub by raising more money and highlighting his other supporters, including Rick Perry, a former Texas governor who was also Trump's energy secretary.

Trump has since insisted the loss was really a win, telling Axios: “The big thing is, we had two very good people running that were both Republicans. That was the win.”

In other cases, some in the party fear Trump could do damage by backing candidates who may do well in Republican primaries, where Trump supporters dominate, but then have trouble winning general elections.

Trump, for instance, has urged football great Herschel Walker to run for the Senate in Georgia, despite significant baggage. A recent Associated Press review of hundreds of pages of public records tied to Walker's business ventures and his divorce found accusations that Walker repeatedly threatened his ex-wife's life, exaggerated claims of financial success and alarmed business associates with unpredictable behavior.

Max Miller, a former Trump White House and campaign aide who is challenging Rep. Anthony Gonzalez, an Ohio Republican who voted for Trump's impeachment, has also come under scrutiny. Gonzalez has significantly outraised Miller, and a recent Politico investigation found Miller has a record of speeding, underage drinking and disorderly conduct.

Trump has also met with candidates looking to oust Rep. Liz Cheney, R-Wyo., who has emerged as a top Trump critic. The former president backed Kelly Tshibaka in her bid to unseat Alaska Sen. Lisa Murkowski, a Republican who voted to convict Trump at his impeachment trial and who is facing reelection next year.

It's unclear whether the loyalty many Republican voters feel toward Trump personally will transfer to candidates he backs. At a meeting last week of the Grove City Patriots, a new Republican club in the Columbus suburbs that heard from three of the candidates on the ballot Tuesday, nearly everyone was a Trump supporter. Few, however, said they cared about his endorsement.

Tim Ruzicka said that he and his wife, Julie, who co-founded the group, are “totally Trump people,” but that his backing wouldn't influence their pick. “For this, no. Everybody stand on your own merit. May the best candidate win,” he said.

Julie Ruzicka echoed her husband's sentiments, saying she planned to study up on the candidates all weekend before casting her vote.

“I'm totally Trump all the way, but that's not necessarily who I'm going to choose,” she said. “You know, Trump's chosen bad people in the past - not his fault, but they flip once they get in there - so I've got to look deeper.”

Mike Murray, an 80-year-old retiree, agreed that Trump's endorsement doesn't mean as much to him as maybe the former president would hope.

“I mean, I like him, but I don't go by other people's endorsements all the time,” he said. “I kind of pick out my own - because most of them are, oh, 'I'm going to fight for you,' but what does that mean? I like Trump, but I have my own mind.”