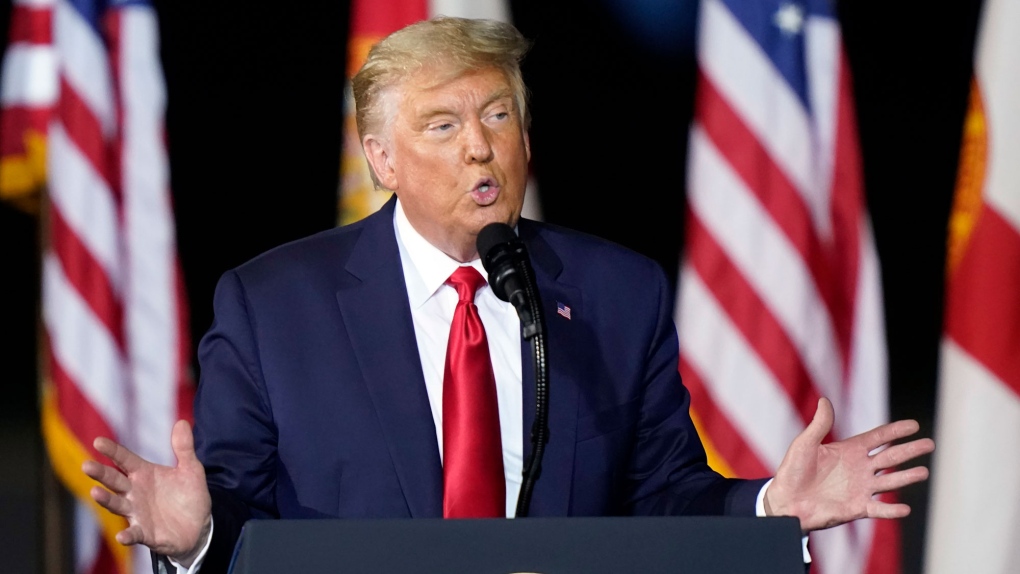 The National Urban League and the National Fair Housing Alliance both have federal contracts and plan to apply for future ones.

The executive order "unconstitutionally forces Plaintiffs to choose between censoring speech on these important issues or forfeiting any opportunity to enter into a federal contract," the groups argued in the complaint.

Trump's executive order, signed last month, called out workplace trainings that explore deep-seated racism and privilege that the administration says could make white workers feel "discomfort" or guilt. The president ordered the Labor Department to set up a hotline to investigate complaints about training sessions that Trump has called "anti-American" and "blame-focused."

Trump has said he is targeting training based on "critical race theory," the idea that racism has permeated American history and institutions. At the first presidential debate, Trump said such training is "teaching people to hate our country."

The directive uses a 55-year-old presidential order spurred by the Civil Rights Movement that sought to ban discriminatory practices at companies that contract with the federal government. Critics say Trump's order twists President Lyndon B. Johnson's 1965 initiative into vehicle for white grievances.

"The executive order smacks of a totalitarian endorsement of white supremacy," Marc Morial, president and CEO of the National Urban League said at a virtual press conference.

Morial called the order a "direct attack on our mission." According to the lawsuit, the National Urban League has a federal contract that includes developing diversity and inclusion training programs for the Department of Labor's apprenticeship programs.

The Department of Labor says the order does not ban "unconscious bias" training that discusses "pre-conceptions, opinions, or stereotypes" that people might have about others. But it prohibits training that that implies anyone is racist or sexist "by virtue of his or her race, sex, and/or national origin."

In a statement, the Labor Department said it "is confident it will prevail in this lawsuit."

"The elimination of race and sex stereotyping and scapegoating in employment is a key civil rights priority of the Trump Administration," the department said.

The lawsuit, however, said the wording of the order is overly broad and is already having a chilling effect on diversity training. Some organizations have asked that words including "systemic racism" and "white privilege" be banned from training, the complaint said. It also cited the University of Iowa's decision to suspend its diversity efforts for fear of losing government funding.

Michelle Lee, co-founder and CEO of Awaken, which provides diversity and inclusion workshops, said one of her clients -- a private company with a government contract -- reached out shortly after the order was issued to ask if she could omit "white privilege" from a speech she planned to give to its employees. Lee said she pushed back, saying she did not believe that language would violate the order, and the company relented.

She said another client, a non-profit that relies on government grants, has asked if Awaken planned to reformulate its training. But Lee said no professional diversity trainer would imply that any group has unconscious bias without proper context.

"Of course we are not going to stand up and say, `you people are inherently racist,"' Lee said.

Within the government, the Justice Department has suspended all diversity and inclusion training. The government has also cancelled training programs at the State Department, Environmental Protection Agency and the Department of Veteran Affairs.

The National Fair Housing Association, which currently has a contract with Department of Housing and Urban Development, said in the lawsuit that it routinely conducts internal training and discussions to address "systemic racism, unconscious bias, and racial inequities." Those include a recent "informal conversation" with employees concerning "perceptions of white people and other demographic groups in connection with the killing of George Floyd."

The Labor Department is also using the 1965 presidential order to target companies, including Microsoft and Wells Fargo, over public commitments to expand or bolster Black and Hispanic representation in leadership roles. The government opened inquiries into both companies, warning them against using "discriminatory practices" to meet their goals.

This story has been corrected to remove a reference in the headline to the NAACP. The lawsuit was filed by the NAACP Legal Defence Fund, not the NAACP.