Trump's 2018: A year in a stranger-than-sitcom presidency 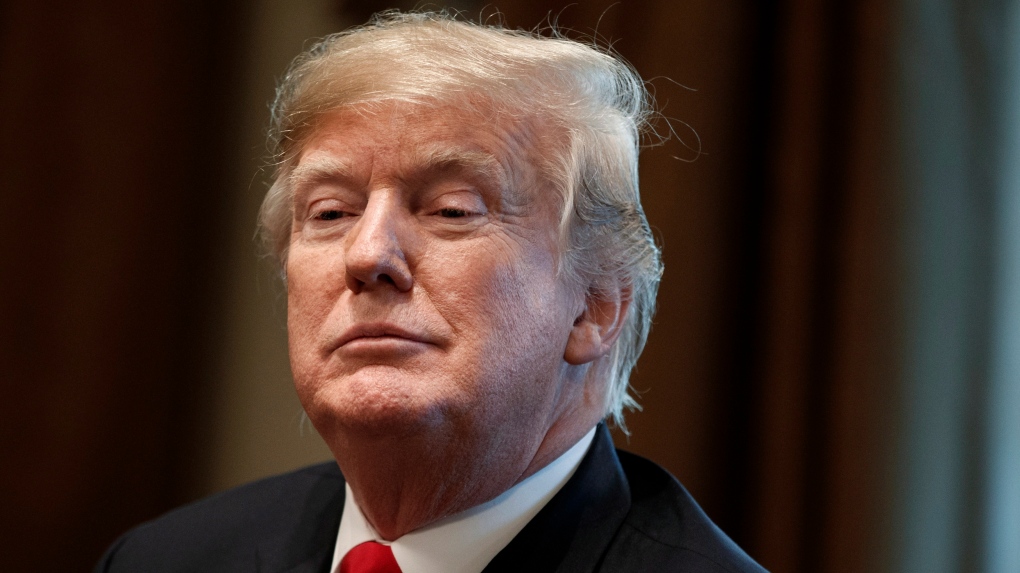 In this Dec. 13, 2018, file photo, U.S. President Donald Trump listens during a meeting in the Cabinet Room of the White House in Washington. (AP Photo/Evan Vucci, File)

WASHINGTON -- The stranger-than-sitcom American presidency opened 2018 with a big tease about mutual nuclear destruction from two leaders who then found "love" not war. It seems U.S. President Donald Trump and North Korea's Kim Jong Un were just playing hard to get.

The presidency ends the year saturated in tumult, with the government in partial shutdown and Trump tweeting a video of himself warbling a parody of the theme song from "Green Acres," a television sitcom from the 1960s, to mark his signing of a farm bill.

Throw in a beer-loving and very angry Supreme Court nominee, an unhappy departing defence secretary, Trump's parallel universe of facts and his zillion tweets, and you can see that president's world this year was touched by the weird, the traumatic and the fantastical -- also known as WTF.

There was no holding back the self-described "very stable genius" with the "very, very large brain."

Some serious and relatively conventional things got done in 2018.

There was a midterm election. Many more Democrats are coming to Congress and not quite all of them plan to run for president. Divided government dawns in January when Democrats take control of the House; Republicans retain their grip on the Senate.

An overhaul of the criminal justice system was accomplished, and in an unusually bipartisan way, though it took a dash of reality TV's Kim Kardashian West to move it along. Gun control actually was tightened a bit, with Trump's unilateral banning of bump stocks.

Trump shocked allies and lost Defence Secretary Jim Mattis over a presidential decision to pull U.S. troops out of Syria, quickly following up with indications that up to half the troops in Afghanistan might be withdrawn, too.

Self-described "Tariff Man" started one trade war, with China, and headed off a second by tweaking the North American Free Trade Agreement and giving it an unpronounceable acronym, USMCA. He withdrew the U.S. from the Iran nuclear deal, putting action behind his Twitter shout: "WE ARE NO LONGER A COUNTRY THAT WILL STAND FOR YOUR DEMENTED WORDS OF VIOLENCE & DEATH."

To Iranian President Rouhani: NEVER, EVER THREATEN THE UNITED STATES AGAIN OR YOU WILL SUFFER CONSEQUENCES THE LIKES OF WHICH FEW THROUGHOUT HISTORY HAVE EVER SUFFERED BEFORE. WE ARE NO LONGER A COUNTRY THAT WILL STAND FOR YOUR DEMENTED WORDS OF VIOLENCE & DEATH. BE CAUTIOUS!

Trump placed his second justice on the Supreme Court in two years after Brett Kavanaugh, accused of alcohol-fueled sexual assault in his youth, raged against the allegations at a congressional hearing and acknowledged only: "I liked beer, I still like beer," but "I never sexually assaulted anyone."

There were frustrations and fulminations aplenty for the president, particularly about the steaming-ahead Russia-Trump campaign investigation by special counsel Robert Mueller ("special councel" in some Trump tweets).

Nor did he make much progress on his promised border wall ("boarder wall"), which he renamed "artistically designed steel slats" in December in what he regarded as a concession to wall-despising, concrete-cursing Democrats. The concession did not work: large parts of the government closed Saturday over the wall-induced budget impasse.

He took heat for a zero-tolerance policy that forced migrant children from their parents until he backed off, inaccurately blaming Democrats for "Child Seperation."

It was a very good year for jobs. It was a check-your-smartphone-right-now, pass-the-smelling-salts year for the stock market. Trump, who assailed the unemployment rate as a phoney measure when he was a candidate, couldn't speak of it enough as Obama-era job growth continued on his watch. He went mum about the market, a prime subject for his boasting before it took a sustained dive.

Trump's approval rating in polls was one of the few constants on this swiftly tilting planet: 42 per cent approval and 56 per cent disapproval in The Associated Press-NORC's latest and 38 per cent-57 per cent via Gallup, neither much different than in January.

Through it all, the mainstreaming of the bizarre proceeded apace and North Korea's Kim set that tone right on Jan. 1 with his New Year cheer to Americans across the ocean: "It's not a mere threat but a reality that I have a nuclear button on the desk in my office. All of the mainland United States is within the range of our nuclear strike."

Trump responded the next day with a tweet about size and performance. "I too have a Nuclear Button, but it is a much bigger & more powerful one than his, and my Button works!"

North Korean Leader Kim Jong Un just stated that the “Nuclear Button is on his desk at all times.” Will someone from his depleted and food starved regime please inform him that I too have a Nuclear Button, but it is a much bigger & more powerful one than his, and my Button works!

Once they got that out of their system, things quickly improved, helped along by Kim's letters to Trump, which the U.S. president called "beautiful." There was no more talk about Trump being a "mentally deranged dotard" or Kim being a "maniac," the musty insults of an earlier time. In June, they held history's first meeting between a North Korean leader and a current U.S. president. "We fell in love," Trump later said at a West Virginia rally.

Kim had previously vowed to visit "fire and fury" on the U.S. but the "Fire and Fury" that made Trump livid early this year was the book of the same name, Michael Wolff's insider account of the Trump White House. That was a different sort of missile. The president took particular exception to observations in the book by his former chief strategist, tweeting about "Sloppy Steve Bannon, who cried when he got fired and begged for his job. Now Sloppy Steve has been dumped like a dog by almost everyone. Too bad!"

Michael Wolff is a total loser who made up stories in order to sell this really boring and untruthful book. He used Sloppy Steve Bannon, who cried when he got fired and begged for his job. Now Sloppy Steve has been dumped like a dog by almost everyone. Too bad! https://t.co/mEeUhk5ZV9

They are said to be on better terms now.

Over the course of the year, Trump spoke at more than 40 campaign rallies, kept up his Twitter barrage (40,000 tweets since 2009 on his @realDonaldTrump account) and answered plenty of questions in infrequent but lengthy news conferences and sit-down interviews.

So what stands out in this blizzardy whiteout of unconventionality?

How about this farewell to his secretary of state, Rex Tillerson? "He was dumb as a rock and I couldn't get rid of him fast enough. He was lazy as hell." (The president usually reserves "dumb as a rock" for journalists.)

Or his description of Stormy Daniels, paid to stay quiet about their alleged affair, as "horseface?"

Or this description of his attorney general, Jeff Sessions, as "scared stiff and Missing in Action," before Sessions was finally out in November?

Will history long remember that in 2018 the president called Democratic Rep. Adam Schiff "little Adam Schitt" on Twitter and nations in Africa "shithole countries" in a private meeting?

Or that he (correctly) predicted Hurricane Florence would be "tremendously wet" or told the AP: "I have a natural instinct for science?"

In July, Trump appeared to side with Russian President Vladimir Putin when he stood by Putin's side at a Helsinki summit news conference and gave weight to Putin's denial that Russia meddled in the 2016 election, despite the firm conclusion of U.S. intelligence agencies that it had. "I don't see any reason why it would be" Russia, Trump said.

But while it's been hardly noticed in a capital consumed by the shutdown drama, Mattis, Syria, steel slats and market convulsions, 2018 draws to a close as it started -- with warnings of a nuclear Armageddon, this time from Putin.

Putin's prompt was Trump's intention to walk away from one arms control treaty and his reluctance to extend another.

That, said Putin, "could lead to the destruction of civilization as a whole and maybe even our planet."