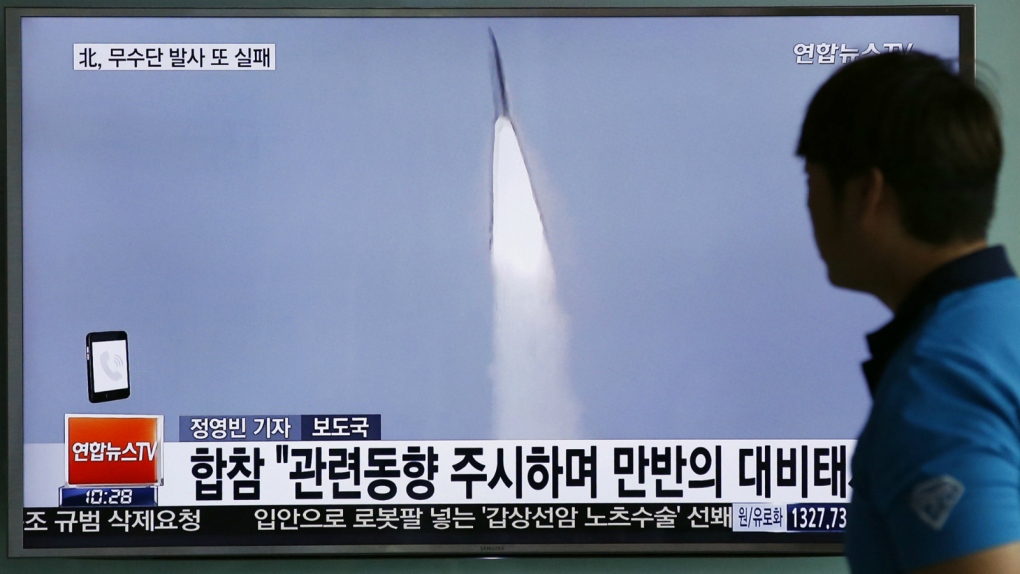 A man watches a TV news program reporting about a powerful new Musudan mid-range missile launch of North Korea, at the Seoul Train Station in Seoul, South Korea on May 31, 2016. (AP / Lee Jin-man)

Trump's foray into North Korea-style bombast injects new uncertainty into the increasingly fragile, six-decade-old truce between the United States and the communist country. While Trump may have delivered some of the strongest words of a U.S. president in recent memory, his talk of military action "like the world has never seen" jars with the message of top American officials to cooperate with China on pressuring North Korea and ultimately seeking diplomatic negotiations.

Hours later, the next threat arrived.

Delivering what it called a "serious warning" to the U.S., an unnamed army spokesman was quoted in state media talking about "enveloping" America's Pacific territory of Guam in missile fire to counteract U.S. bombers that are based there and fly over South Korea - and "get on the nerves" of the North.

The competing threats escalated tensions even further. Although it wasn't clear if Trump and the Koreans were responding directly to each other, the heightened rhetoric added to the potential for a miscalculation that might bring the nuclear-armed nations into conflict.

Trump spoke after The Washington Post reported that U.S. intelligence officials believes the North can now fit a nuclear bomb on a missile, taking its claims of being able to punish the United States with an atomic attack closer to reality. Its recent tests of intercontinental missiles appear, after years of North Korean efforts, to have finally put the U.S. in range.

Whereas previous American leaders have sought to avoid rhetorical clashes with Pyongyang, Trump readily joined the fight. His critics were quick to pounce, suggesting he risked playing into North Korean efforts to divide the U.S. from its military-averse allies in Asia and reinforcing claims that Washington isn't interested in nuclear disarmament, and really wants to oust the Kim family dynasty.

"You got to be sure you can do what you say you're going to do," Republican Sen. John McCain, a frequent Trump critic, said of the president's comments. "That kind of rhetoric, I'm not sure it helps. The great leaders I've seen don't threaten unless they're ready to act and I'm not sure that President Trump is ready to act."

It wasn't clear what threats Trump was referring to. On Monday, Pyongyang's blasted a new set of U.N. sanctions against the country, saying it would make the U.S. pay a "thousand-fold for all the heinous crimes" committed against North Korea.

Such threats are routine from the isolated, Stalinist state, which often speaks of turning neighbor South Korea's capital into a "sea of fire" and warns of "merciless" and unprecedented attacks on its enemies, including nuclear strikes on the United States. The bombast is so frequent that it is difficult to judge the seriousness, particularly as the North has not used its massive conventional arms stockpiles against its neighbors or U.S. military bases in South Korea and Japan.

Trump, too, has earned a reputation for exaggeration and sometimes unsubstantiated policy directives, often delivered via Twitter. Markets Tuesday showed no reaction to Trump's threat. There was no indication the Pentagon was adjusting its military posture.

While North Korean leaders may welcome Trump's attention, and see it as recognition that they lead a major player on the world stage, they could up the ante further. If the North calls Trump's bluff and conducts more missile launches or nuclear tests, Trump will be under added pressure now to deliver a forceful American response. If it follows through on its Guam threat, Trump would have no choice.

All the threats raise the potential for an accidental conflict, one that now would pit nuclear-armed forces against one another.

North Korea experts have long advised against overtly hostile threats to the North, particularly given how little is known about the country's unpredictable young leader, Kim Jong Un, and his stewardship of the world's largest standing army.

Even after North Korea's bellicose response to the latest round of Security Council sanctions passed on Saturday, Secretary of State Rex Tillerson said Monday Washington wasn't seeking confrontation with Pyongyang. He voiced his hope North Korea would "choose a different pathway," one leading to a dialogue.

Such careful language had been a hallmark of official U.S. commentary on North Korea for decades, if only to prevent a minor incident touching off a major conflagration.

Trump: North Korea 'will regret it fast' if it acts against U.S. allies

Guam's residents concerned but have faith in U.S. military

Everything you need to know about North Korea's missile program