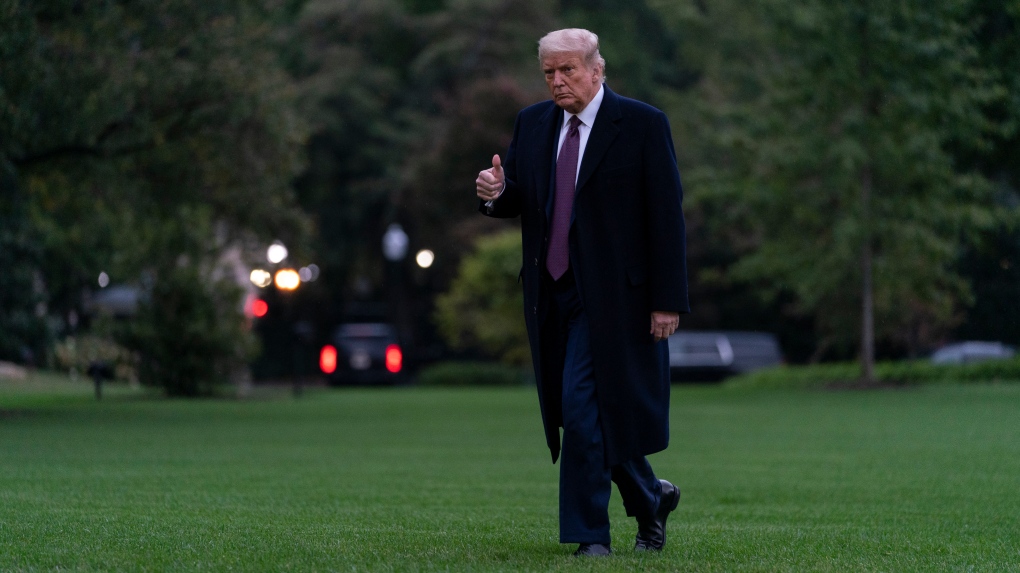 U.S. President Donald Trump gives the thumbs-up as he walks from Marine One to the White House in Washington, Thursday, Oct. 1, 2020, as he returns from Bedminster, N.J. (AP Photo/Carolyn Kaster)

MADISON, WIS. -- U.S. President Donald Trump moved a planned western Wisconsin appearance to elsewhere in the state amid calls from a city mayor and the state's governor, both Democrats, that he not hold a rally there due to a surge in coronavirus cases.

The director of the La Crosse airport said the event was cancelled due to a lease issue, not concerns over the coronavirus.

Wisconsin ranks third among states for per-capita increases in cases over the past two weeks. State health officials reported 2,887 newly confirmed cases on Thursday, a new daily record, along with 21 more deaths. The state has now seen 125,161 cases and 1,348 deaths since the pandemic began.

Trump replaced the La Crosse rally with one in Janesville about 175 miles away where the virus is not spreading quite as rapidly. He's also holding a rally Saturday in Green Bay. Both will be outside at airports. Trump's decision to visit Janesville prompted authorities there to also request that Trump reconsider.

Both La Crosse and Green Bay have been identified as a "red zone" for community spread of COVID-19 by the White House Coronavirus Task Force. Janesville is not on the list.

The coronavirus task force report urged social distancing in "red zones" to the "maximum degree possible." Trump rallies typically draw many thousands of people, who crowd closely together, shouting and cheering -- the vast majority without masks.

"The tenant was notified of this, disagreed with the City of La Crosse' position, but opted not to host the event," Turner said in a statement. Kelly Colgan Hammen, president of the private air service where the rally was to be held, did not immediately return a message.

"The tenant was notified of this, disagreed with the City of La Crosse' position, but opted not to host the event," Turner said in a statement. He did not identify who the tenant was.

Trump made a similar move last month, changing his plans for large airport rallies in Nevada after local officials warned they would violate the state's ban on gatherings of more than 50 people. There is no statewide limit on gatherings in Wisconsin after Republicans successfully challenged the Democratic governor's "safer at home" order this spring.

State and local health officials in Wisconsin urged attendees to follow local guidelines but stopped short of asking Trump not to come.

"Masks and physical distancing should be required," according to guidance released Wednesday by the health collaborative. "Venues should consider cancelling or rescheduling any large gatherings planned for the next 14 days."

As of Thursday, La Crosse County had reported 3,205 cases and three deaths. The state listed the activity level of COVID-19 as "very high."

Brown County, where Green Bay is located, has had 9,796 cases and 66 deaths. The number of positive cases over the past two weeks was up 24 per cent, according to the state Department of Health Services.

In Rock County, where Janesville is located, virus activity is listed as "high," one level lower than Brown and La Crosse counties.

Rock County Board Chairwoman Kara Purviance said in a statement that the county is seeing its highest number of active cases yet, and she hoped Trump would reconsider. But if the rally proceeds, she said, she urges residents to follow social distancing guidelines and wear masks.

Democratic Gov. Tony Evers said he hoped Trump would cancel his visit to the state. If Trump holds a rally in Wisconsin he should insist his supporters wear masks and not let them in if they refuse, the governor said.

"He can control this," Evers said.